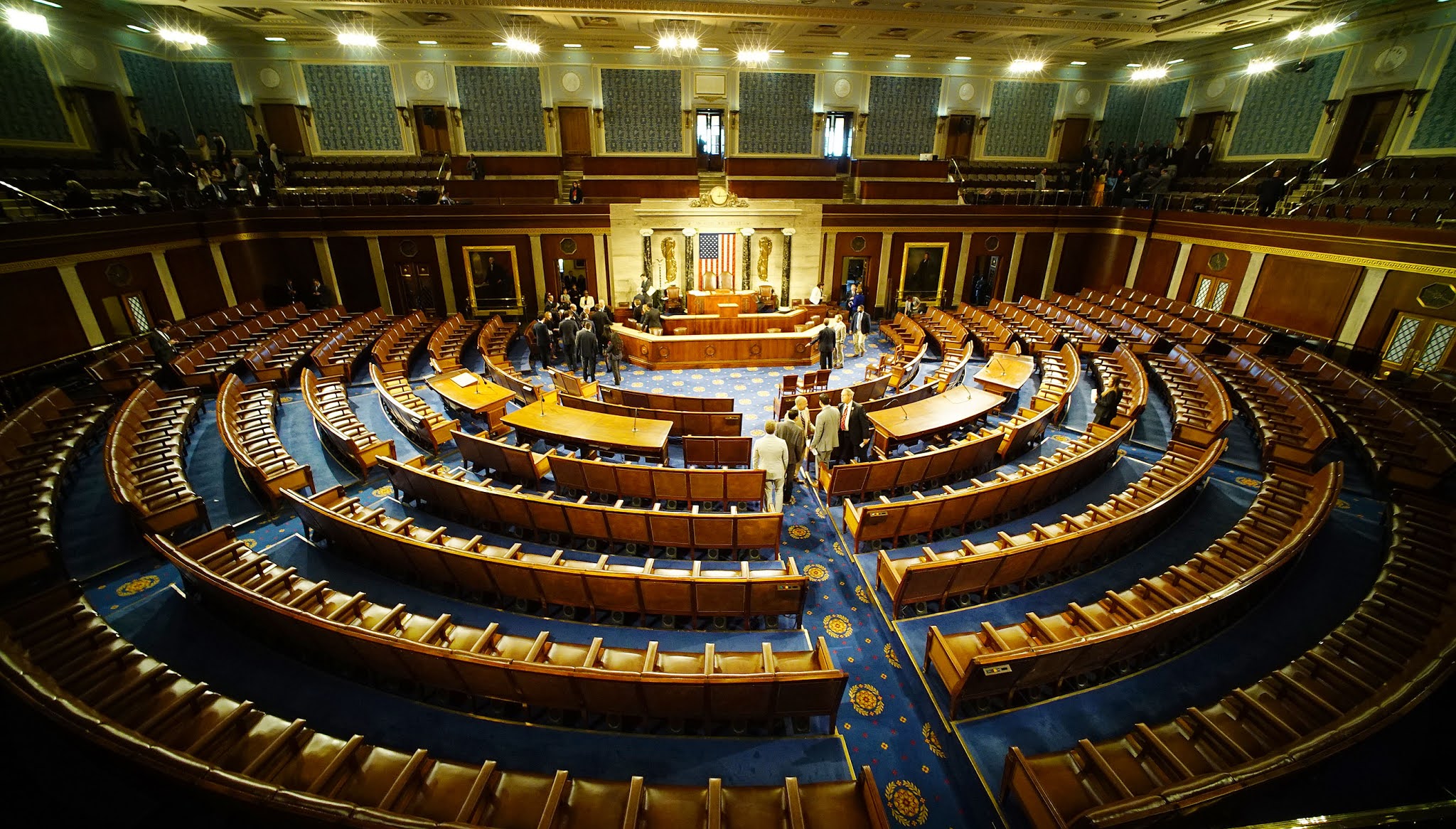 Image provided by US House

President Donald Trump has been impeached for a second time, this time for Incitement of Insurrection (details in the resolution posted below). The vote was 232-197 with 4 members not voting.

Only three Presidents have been impeached, Andrew Johnson in 1868 (11 Articles listed at https://en.wikipedia.org/wiki/Impeachment_of_Andrew_Johnson#Impeachment), Bill Clinton in 1998 (Perjury and Obstruction of justice), and Donald Trump in 2019 (for Abuse of Power and Obstruction of Congress).

Resolved, the Donald John Trump, President of the United States, is impeached for high crimes and misdemeanors and that the following article of impeachment be exhibited to the United States Senate:

On January 6, 2021, pursuant to the 12th Amendment to the Constitution of the United States, the Vice President of the United States, the House of Representatives, and the Senate met at the United States Capitol for a Joint Session of Congress to count the votes of the Electoral College. In the months preceding the Joint Session, President Trump repeatedly issued false statements asserting that the Presidential election results were the product of widespread fraud and should not be accepted by the American people or certified by State or Federal officials. Shortly before the Joint Session commenced, President Trump, addressed a crowd at the Ellipse in Washington, D.C. There, he reiterated false claims that “we won this election, and we won it by a landslide.” He also willfully made statements that, in context, encouraged — and foreseeably resulted in — lawless action at the Capitol, such as: “if you don’t fight like hell you’re not going to have a country anymore.” Thus incited by President Trump, members of the crowd he had addressed, in an attempt to, among other objectives, interfere with the Joint Session’s solemn constitutional duty to certify the results of the 2020 Presidential election, unlawfully breached and vandalized the Capitol, injured and killed law enforcement personnel, menaced Members of Congress, the Vice President, and Congressional personnel, and engaged in other violent, deadly, destructive and seditious acts.

President Trump’s conduct on January 6, 2021, followed his prior efforts to subvert and obstruct the certification of the results of the 2020 Presidential election. Those prior efforts included a phone call on January 2, 2021, during which President Trump urged the secretary of state of Georgia, Brad Raffensperger, to “find” enough votes to overturn the Georgia Presidential election results and threatened Secretary Raffensperger if he failed to do so.

In all this, President Trump gravely endangered the security of the United States and its institutions of Government. He threatened the integrity of the democratic system, interfered with the peaceful transition of power, and imperiled a coequal branch of Government. He thereby betrayed his trust as President, to the manifest injury of the people of the United States.

Wherefore, Donald John Trump, by such conduct, has demonstrated that he will remain a threat to national security, democracy, and the Constitution if allowed to remain in office, and has acted in a manner grossly incompatible with self-governance and the rule of law. Donald John Trump thus warrants impeachment and trial, removal from office, and disqualification to hold and enjoy any office of honor, trust, or profit under the United States.

Loading...
"Not by might, nor by power, but by my spirit, saith the Lord of hosts." Zechariah 4:6
BEFORE IT'S NEWS ON TELEGRAM
GET THE TELEGRAM APP - https://telegram.org/ JOIN OUR CHANNEL - https://t.me/BeforeitsNews
Read it..
BEFORE IT'S NEWS
SIGN UP FOR OUR NEWSLETTER
Today's Top Stories
Lin Wood New Article! Full Marshall Report January 21st
X22Report: Sometimes You Must Sacrifice Yourself For The Greater Good! - Must Video
Whitehouse Busted: Joe Announces Plea Deal For Hunter Biden
Robert David Steele: Jan 21, 2021 Nicholas Veniamin On USA Presidential Transition! - Must See Video
Anonymous: Something Bigger Is Coming! Nobody's Talking About This "The Truth May Shock You, Prepare Now"
Declassified: Criminal Indictment For 911 Attack... May They All Burn In Hell.
Lin Wood Shares - Two New Interviews
Restored Republic via a GCR: Update as of Fri. 22 Jan. 2021
Monkey Werx: It's Been A While! Final Curtain? Overwatch 1 20 20 SITREP
By & For The People! "We Got Back Our Government, We Just Moved To A Republic"! - SGT Report Must Video
Loading...
Featured
Situation Update, Jan 22, 2021 - It's Already Too Late for the Controllers! - Mike Adams Must Video
President Trump Offers Troops Stays at Trump Hotel After Democrats Banish National Guard to Parking Garage
Why Is The Pentagon Shutting Out Biden & Refusing To Cooperate? Is He The Commander In Chief Or Not? - Dave Hodges Must Video
Flyover Conservatives Bombshell Interview With Juan O'Savin (Video)
Monkey Werx 11:11 Wicked Brew - Flight Paths Overwatch SITREP 1-22-21
In Cold Blood - The Savage Massacre of East Timor (Video)
Anna Von Reitz: About "Q" (Video)
Benjamin Fulford: Patriots Guard Your Families.. If You See Them, Protect Yourselves
X22Report: The Central Bank Invisible Enemy Believe They Won, Their Guard Is Down! - Great Video
Abomination! Shocking New Magazine Cover Portrays Biden In Unthinkable Position! Beware CULTholicism!
Top Global
In Cold Blood - The Savage Massacre of East Timor (Video)
Fauci: Mandatory Vaccines, Vaccine Passports? ‘Anything Is Possible’
Declassified: Criminal Indictment For 911 Attack... May They All Burn In Hell.
It Only Took 24 Hours: US Sends MAJOR Convoys Into Syria; Russian Moving Convoys to Intercept! (video)
Pedodent Joe Biden and the Fall of the Republic - TheCrowhouse
Prof. Dolores Cahill: Should We Take This Vaccine?
China Still the Number One Threat, Bitcoin Continues To Grow, Food Shortages Coming? - Red Pill 78 Must Video
US National Intelligence Confirms China Behind Election Fraud & Fake Pandemic! - Must Video
What Will Biden’s Policies Be Towards China, India and North Korea?
Washington Sends Military Ship to Patrol South American Coast
Loading...
Top Alternative
MONSTROUS: Amazon REFUSED To Help With China Virus/COVID Vaccine For Political Reasons (Until Biden Was Sworn In)
Our Plans Are Not God's Plans! The End Won't Be For Everyone! Pray! - Must Video
Real Reptilian Alien Shapeshifters!... The Subject No One Wants To Talk About
Dr. Steven Greer: Remote Viewing, Higher State of Consciousness, and The Contact
Fauci: Mandatory Vaccines, Vaccine Passports? ‘Anything Is Possible’
Prepare for Extreme Tyranny
NTEB Prophecy News Podcast: The Hunger Games Style Inauguration Ceremony is the Perfect Beginning for the Darkness of the Biden Reich
Declassified: Criminal Indictment For 911 Attack... May They All Burn In Hell.
Kids Can Hide Their “Pointy Poker” With These Transgender Bikini Bottoms
While Media Literally Compares Satan Soldier Biden to God, How Do We Move Forward As Christians With A Biden Presidency In 2021- We Have An Advice That May Surprise You