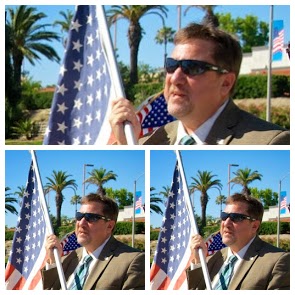 Michael Beller, PBS: “Even if Biden wins, we go for all the Republican voters, and Homeland Security will take their children away…and we’ll put them into re-education camps.  In these times, which are unique, I mean, Trump is close to Hitler…kids who are growing up, knowing nothing but Trump, for four years, you’ve got to wonder what they’re going to be like.  They’ll be raising a generation of intolerant, horrible, people — horrible kids…enlightenment camps…Americans are so f***ing dumb.  You know, most people are dumb…It’s good to live in a place (D.C.) where people are educated and know stuff.  Could you imagine if you lived in one of these other towns or states where everybody’s just…stupid?  What’s great is that COVID is spiking in all the red states, right now.  So, that’s great; because either those people won’t come out to vote for Trump, you know the red states, or a lot of them are sick and dying…I can’t stand it.  I mean, every once in a while, I’ll look at Fox News and it makes me want to throw up after five minutes.  It’s all this Joe Biden sh*t now.  Joe Biden — you know, I can’t stand it.  It’s all made up.  It’s all ridiculous.  And they are pushing that so hard.  It’s unbelievable.”  https://twitter.com/Project_Veritas/status/1349067508125462528

Keith Olbermann: “We also want as many members as possible of this corrupt, immoral, anti-democratic outgoing administration indicted, arrested, tried, and imprisoned.  We want enough of them in there they can hold reunions and birthday parties.  We want the prisons so filled with Trumps and Trump flunkies and Trump apologists and Trump enablers that we have to convert Trump buildings into new G*d-d*mned Trump prisons.  I am not trying to start some sort of reality-based, non-paranoid version of lock them up.  I am trying to get the laws of this country enforced.”  At six minute mark to 6:38 mark.  https://youtu.be/Mn2svZNUMgE

Statement by Antifa as reported by Andy Ngo, author, journalist, critic of Antifa, regarding the shooting death of Ashli Babbit, Trump supporter, Military Veteran, and mother who was killed on January 6, 2021 at the Capitol Hill protest.  “Ashli Babbitt deserved it.”  https://welovetrump.com/2021/01/12/antifa-and-blm-openly-mocking-ashli-babbitt-she-got-what-she-deserved

Cumulus Media to on-air personalities: “We need to help induce national calm NOW,” Brian Philips, executive vice president of content for Cumulus, wrote in an internal memo, which was first reported by Inside Music Media. Cumulus and its program syndication arm, Westwood One, “will not tolerate any suggestion that the election has not ended. The election has been resolved and there are no alternate acceptable ‘paths.’ ”  https://www.washingtonpost.com/lifestyle/media/cumulus-radio-conservative-election-fraud/2021/01/11/e12ec46e-537c-11eb-a817-e5e7f8a406d6_story.html

Antifa storms the streets of New York City in riot gear to face off with any dissent (https://populist.press/mob-in-riot-gear-has-just-taken-over-nyc/) and in San Diego Antifa spent their time hunting down and attacking any Trump supporters after a local rally (https://vidmax.com/video/200975-antifa-assault-trump-supporters-like-they-re).

CEO John Matze after Parler is removed from the internet by big tech: “They made an attempt to not only kill the app, but to actually destroy the entire company,” he said. “And it’s not just these three companies (Amazon, Google and Apple).”  https://trendingpolitics.com/devin-nunes-calls-for-racketeering-probe-into-big-tech-after-coordinated-parler-ban

Amazon to the CEO of Parler due to Parler’s large conservative clientele: “Recently, we’ve seen a steady increase in this violent content on your website, all of which violates our terms.”  https://thefederalist.com/2021/01/10/big-tech-oligarchs-collude-to-ban-parler-from-internet-and-phones/

Representative Devin Nunes, Republican, California, in response to the shutdown of Parler by Big Tech: “If you don’t want to be regulated by left-wingers that are at Twitter and Facebook and Instagram, where you get shadowbanned, nobody gets to see you — nobody gets to see you, they get to decide what’s violent or not violent, it’s preposterous.  So, I don’t know where the hell the Department of Justice is at right now or the FBI. This is clearly a violation of antitrust, civil rights, the RICO statute. There should be a racketeering investigation on all the people that coordinated this attack on not only a company but on all of those like us, like me, like you, Maria. I have 3 million followers on Parler. Tonight, I will no longer be able to communicate with those people. And they’re Americans.” https://www.breitbart.com/clips/2021/01/10/nunes-parler-ban-a-violation-of-antitrust-civil-rights-the-rico-statute-there-should-be-a-racketeering-investigation/

CNN’s Oliver Darcy calls for television carriers to ban conservative news networks: “…it is time TV carriers face questions of lending their platforms to dishonest companies that profit off of disinformation and conspiracy theories.  After all, it was the very lies that Fox, Newsmax, and OAN spread that helped prime President Trump’s supporters into not believing the truth: that he lost an honest and fair election.”  https://twitter.com/tomselliott/status/1347465189252341764?ref_src=twsrc%5Etfw%7Ctwcamp%5Etweetembed%7Ctwterm%5E1347465189252341764%7Ctwgr%5E%7Ctwcon%5Es1_&ref_url=https%3A%2F%2Fwww.infowars.com%2Fposts%2Fcnns-stelter-asks-networks-to-censor-trump-border-wall-speech%2F

Democrat Activist Group in Colorado after Congresswoman Lauren Boebert during the January 6 Capitol protest tweeted, “The speaker has been removed from the chambers”: “Lauren Boebert has betrayed the American people and is a conspirator in the insurrection that occurred at Capitol Hill on January 6th,” the statement said. “As the citizens she represents in Congress, we cannot recall her and we cannot impeach her, but we do not accept that she is fit to represent the people of Colorado District 3 in Congress. We can only hope that her colleagues in Congress expel her.”  The congresswoman responded she never encouraged mob violence, and that she never saw the Democrats condemning any violence by Black Lives Matter and Antifa over the Summer of 2020.  https://dailycaller.com/2021/01/12/lauren-boebert-statement-after-urged-to-resign/

Earlier in the year, while discussing the BLM and Antifa riots, CNN’s Chris Cuomo said, “who says protests have to be peaceful?”  He then was quick to denounce as violence by Trump Supporters on January 6, 2021 at the Capitol.  When called on his hypocrisy, he responded: “Context: retrumplicans were attacking anger and hostility of protestors toward the “system” – cops, laws, etc. i said they don’t have to just sing hymns and go home. Never supported riots. Never would. Operatives posing as media weaponizing my words know this. They are a problem.”  https://twitter.com/ChrisCuomo/status/1349050326377181186?ref_src=twsrc%5Etfw%7Ctwcamp%5Etweetembed%7Ctwterm%5E1349050326377181186%7Ctwgr%5E%7Ctwcon%5Es1_&ref_url=https%3A%2F%2Ftwitchy.com%2Fsamj-3930%2F2021%2F01%2F12%2Fhe-mad-chris-cuomo-flips-out-when-confronted-with-his-own-words-supporting-violent-protests-over-the-summer%2F

Sheryl Sandberg, COO of Facebook, regarding the social media network’s ban of Trump: “No plans to lift it right now.”  https://www.breitbart.com/tech/2021/01/12/facebook-has-no-plans-to-lift-ban-on-donald-trump/

Media doctored video of Trump speech to make it look like he incited violence on January 6, 2021 at the Capitol: https://noqreport.com/2021/01/12/even-cbn-doctored-a-video-to-prove-president-trump-promoted-insurrection/

Actress Amber Tamblyn after Twitter and Facebook removed Trump from their networks: “We need to go further.” https://justthenews.com/nation/culture/hollywood-hearts-violence

Actress Ellen Barkin in a Tweet regarding Trump: “should be removed…and not just from office.” https://justthenews.com/nation/culture/hollywood-hearts-violence

Actress Debra Messing doubled down on her wish for violence against Trump, and that she hopes he becomes a rape victim: https://www.breitbart.com/entertainment/2020/12/14/debra-messing-defends-saying-she-hopes-trump-is-the-most-popular-boyfriend-in-prison/

Bette Midler tweeted she was grateful for a physical assault against Kentucky Senator Rand Paul by his neighbor, breaking several ribs and damaging part of a lung, which was later removed.  https://www.foxnews.com/media/kristy-swanson-bette-midler-rand-paul-twitter-attack

Emmy winner Alec Baldwin turned his infamous ire against Sen. Ted Cruz, saying he should be doused with horse urine before being tarred and feathered.