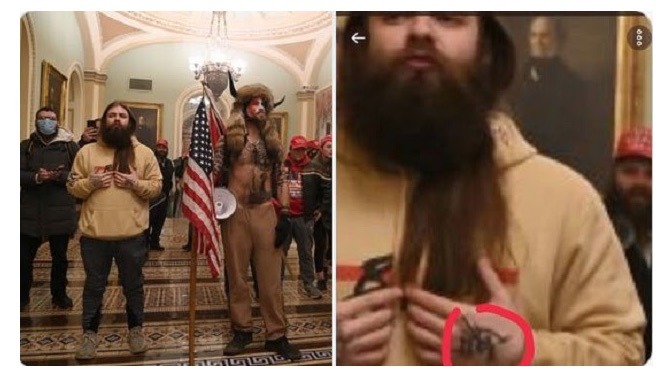 Fakestream Media continues to manipulate the world into thinking the U.S. Capitol insurgency was the fault of President Trump, calling for the 25th amendment, while Schumer and Pelosi et al are pushing the DoJ to go after Trump for inciting a riot to overthrow the government.

THEY are saying that all MAGA / Trump supporters are now “Domestic Terrorists,” especially “Q-Anon followers.”

The hypocrisy by the communist left is over-the-top as NOTHING was said by these bastards about ANTIFA / BLM fire and destruction on the streets of America.

What THEY are not wanting the fakestream media to talk about is….WE in the Patriot Movement have the intel and WE know that ANTIFA led the MAGA cattle to a deadly slaughter at the Capitol. WE all have the footage and intel on two particular ANTIFA thug leaders. See Video…

The American public are being hoodwinked by the communist force that continues their coup against President Trump.

Trump MUST prevail and if he has NO support in-order to begin massive arrests of all TRAITORS, then at least…HE MUST expose, expose and expose the foreign interference and traitors aiding and abetting the Chinese Communists.

Word tonight is that Pelosi’s laptop was grabbed and shows emails with ANTIFA leaders. NOT CONFIRMED.

I am also seeing reports from credible sources, a U.S. military operation (during the night) was conducted in Ukraine, a raid of a known Biden (owned) building and some very disturbing items and black tar heroin was seized.

The next couple of weeks could further entice the mental trip we’re all experiencing…WE ARE AT WAR.

Regardless of what Trump finally has to do, which WE might NOT agree with, the revolution and resistance against an illegal government will not end, but will become extremely dangerous, but righteous and our duty under the U.S. Constitution.

Victory Update: What Happened in D.C. with Sarah Palin – Video