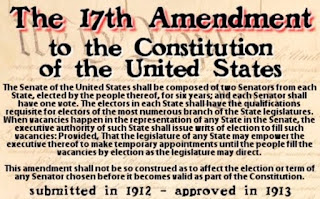 This is a response I provided to an email I received asking the above question.

The 17th Amendment took the voice of the State Legislatures out of the federal government, a government that was created to serve them by handling external issues so that the states could better focus on domestic issues (which are none of the federal government’s business).  The excuse by the progressives was that the 17th Amendment would remove corruption from the Senate (of which they never proved), but once it went to a democratic vote the corruption actually increased.  The Congress is supposed to be a bicameral congress with two different constituencies represented (House: People, Senate: States).  Remember, the federal government was established to only handle external issues.  There is not supposed to be any domestic policy by the federal government.  It was created to handle external issues, controversies between the states, and any issue that is directly related to the union’s preservation (such as a communication mechanism like the postal service).  The federal government, in other words, was not created for the people, it was created by the people (delegates representing the States) to handle those external issues (and a few others) so that localism could be better taken care of by local government by way of not burdening local government with the issues assigned by the Constitution to the federal government.
One of the side stories that happened as a result of the establishment of the 17th Amendment was 1964 Reynolds v. Simms, which also changed the way State senators were appointed.  It used to be one per county, and the county leadership appointed the State Senators rather than them being democratically voted in.  The Warren Court decided that Alabama, who at the time was still doing it the old way, could no longer do it that way because it wasn’t very democratic.  Once the ruling went into place it forced the States to abandon the original way, and adopt the more “democratic” way of putting State Senators into office.  What that did is it eliminated the equal suffrage of the counties and established districts divided by population.  As a result, in California, for example, Senate district 2 has 8 counties, but Los Angeles County has 13 Senate Districts.  It shifted us away from being a republic to a democracy, and shifted us away from a strong rural voice to the population centers taking control of the State Senate.
Now, let’s talk hypothetically, for a moment.  Let’s say the 17th Amendment and Reynolds v. Simms had never gone into play.  In California, with one state senator per county, appointed by the counties, rather than being a Democrat super-majority, the State Senate in California would be dominated by the Republicans, or at least Senators who have an interest in the well-being of the rural areas.  With the 17th Amendment gone, and the State Legislature appointing the U.S. Senators, and with the two houses being of opposite ideology, they would have to compromise, and instead of two Democrat socialist U.S. Senators, California would likely have one Democrat and one Republican Senator.  If the same rings true in many of the other states, repealing the 17th Amendment, and in turn reversing Reynolds v. Simms, would result in more balanced State legislatures, and a U.S. Senate that is more than 75% conservative and not controlled by the hard left population centers of the country.
Hope that helps.
Blessings,
Douglas V. Gibbs
– Political Pistachio Conservative News and Commentary