You remember John Kerry, right? He served in Vietnam, and was also a Senator (damn, that’s an old joke from 2004, eh?) Well, he’s a grand high poobah in China Joe’s climate cult sect, as you know

‘For God’s Sake, Man!’: Rick Perry Calls John Kerry To Get Off The Private Jet If He Cares About Climate 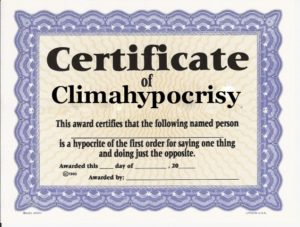 Perry spoke with Fox News host Neil Cavuto during a Tuesday segment of “Your World,” and he argued that Kerry was “a pretty poor spokesperson” for climate change. (video at the link)

Cavuto began by referring to Kerry’s suggestion that Keystone XL Pipeline workers — who were displaced by Biden’s executive order — could go to work making solar panels.

“How do they transition to making, building, putting on homes and businesses solar panels? How do they do that without — without some preparation, without going back essentially to the beginning, to zero?” Cavuto asked.

“First off, John Kerry is a pretty poor spokesperson for the climate business when he hops on his private jet and the leaves a trail of emissions that is about 40 times more than what it would be if he flew first class on a, you know, United Airlines going somewhere, American airlines, one of our great airlines. Matter of fact, they probably need the work right now,” Perry replied. “So it just doesn’t square good with me.”

“Listen, if you’re going to parrot this line that we’ve gotta do things to help the climate out, for God’s sake, man, get off your private jet and go travel with the rest of the folks out there if you’re going to move around,” Perry said.

Yeah, but, see, they need to use fossil fueled private jets to help solve the climate crisis (scam). They can’t just travel around with the plebes. There are appearances to keep! Just sit down, shut up, and let your betters do what they do.

“If you offset your carbon — it’s the only choice for somebody like me who is traveling the world to win this battle,” Kerry said. https://t.co/2YqAbSJxY3 pic.twitter.com/qbeD0f4lnL

See, it’s OK for him (you’ll be paying for those offsets out of your tax dollars, peons), because he’s from the climate cult Government and he’s here to help.