As you know by now, Donald J Trump was acquitted yet again for shampeachment. The result was never in doubt. We all knew there was zero chance the Democrats would get enough Republicans to cross over to get the necessary 67 votes. Seven did cross over, and the Louisiana Republican party has already voted unanimously voted to censure Bill Cassidy for voting to convict. I’m wondering if the NC GOP will do the same for Richard Burr, but, he says he’s not running in 2022.

So, what comes next? CNNLOL points out all the legal nutbaggery aimed at Trump from hardcore leftists in leftist states (obviously, they didn’t put it that way, but, that’s exactly what it is). I wouldn’t be surprised if the Democrats attempted to censure Trump next week, even though this whole shampeachment seemed more like censure. Charles Hurt thinks the moonbats will try something different 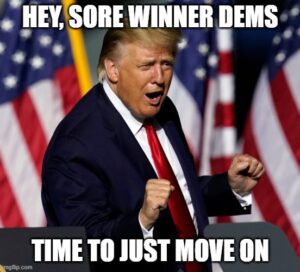 With the result of the second impeachment charade a forgone conclusion in Washington, let us now turn to the final partisan tool remaining in Democrats’ torture closet: The 14th Amendment.

This amendment allows Congress to banish from future federal office any current or former politician deemed by congress to have “engaged in insurrection.” Its adoption after the Civil War was designed to prevent officers or political leaders of the Confederate regime from being elected to Congress or the presidency.

In a normal world, it would be impossible for Congress to punish a man for engaging in “insurrection” after Congress had just acquitted the same man of engaging in the same insurrection. Or, as Senate Majority Leader Chuck Schumer recently called it on the Senate floor, “inciting the erection.”

But this is Washington and the man in question is former President Donald Trump, whose Latin name is Swampus Horribilis.

Gripped by hatred and fear of their long, partisan nightmare, Democrats in Congress today seek “unity” by heaving Mr. Trump into the dustbin of the Confederacy. In this name of “unity,” what precisely does that mean for the 74 million current Americans who just voted for this modern-day Jefferson Davis?

To be sure, it is a rusty, gnarly hatchet. But when all you have is a hatchet, everything is plump flesh and brittle bone. And hack away they will!

They are so fearful of Trump, and so full of TDS, that it is not out of the realm of reality, not a conspiracy theory, to think that Democrats will go down this route. I think there’s little chance Trump will run in 2024: he’ll be older, and I bet he’ll have moved on, and so will Melania. He may well be the king maker for the GOP primary, and Republicans had best have learned the lessons of the Trump era: defend yourself and your policies voraciously. You do not have to turn the amp up to 11 as Trump did (and, I’ve criticized him over this) and need to dial the attacks back on your own party, but, you can’t be a “get along go along” Republican anymore, not when Democrats are free to ditch the civilized part of the old saying “politics is a dirty, nasty business with a veneer of civility on top.” Republican need to get tough.

As for Dems and Trump, will the Dems move on this week, or continue with TDS? We’ll know soon enough.

Do they have to give her back the commemorative pens? https://t.co/KxGcaNwNtT