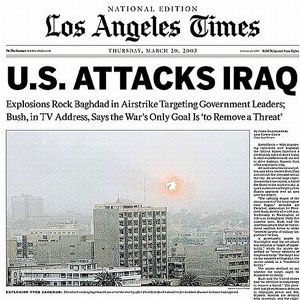 It was March 2003 or the day that President Bush led military forces in Iraq.

At the time, I supported the military decision because the US could not give Saddam Hussein the benefit of the doubt after 9-11.

After 9-11, the US could not afford to have a well armed tyrant in the Middle East giving us the finger for 12 years without consequences.

Everything changed in ’98 when Saddam kicked out the inspectors and gave everyone the finger. Saddam should have been removed in ’98. By late ’98, it was clear that Saddam Hussein had no intention of respecting any international agreement or the cease fire.

Between ’91 and ’98, Saddam shot at US planes. He did not allow UN inspectors access to Iraq’s labs and military bases. He tried to kill the first Bush during a private visit to Kuwait in ’93. Last but not least, he did not comply with any of the cease fire requirements.

Saddam was given one more chance in ’02. President Bush went to the UN and enumerated all of the violations. The UN gave us one more resolution calling on Saddam to do his duty or face consequences.

The inspectors went back in after a 4 year absence. Once again, Saddam did not allow the inspectors to move freely and do their work.

So President Bush acted and Saddam was removed!