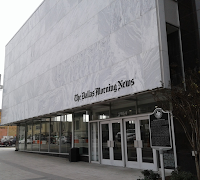 The Dallas Morning News once supported Republicans, like Gov. Mitt Romney in 2002, and of course President George W. Bush, President George Bush and President Ronald Reagan.  In 2016, it went for Hillary Clinton, and then in 2018 for Beto O’Rourke.

On Wednesday morning, its editorial page addressed the border issue this way:

President Joe Biden’s administration, which promised a more humane and responsible immigration policy, seems to have been caught flat-footed by the massive surge of migrants from Central America to the United States, and has made a bad situation worse by issuing messages that are as clear as mud.
Administration officials have spent the last few days trying to send the belated message that the border is closed. But for weeks, those officials also emphasized that they were reversing the Trump administration’s border policies and would be more welcoming.
No wonder the border is in crisis. When the message is so muddled, people who are desperate to flee dangerous situations at home hold out hope that they will be allowed to enter if they simply show up at the border.
And the administration can’t say it didn’t know this was coming. In promising to roll back Trump’s immigration policies, Biden had asked for time to implement “guardrails” to avoid winding up with “2 million people on our border.”

Wonder if the editorial board checked with President Andres Manuel Lopez-Obrador of Mexico?   He is basically saying the same thing:

I don’t know where this is going to end but I wouldn’t want to be a Democrat running in a competitive district in 2022.   High gasoline prices and chaos on the border is not a good platform.