Scott Walter, president of the Capital Research Center, testified in a subcommittee hearing of the Senate Judiciary Committee on March 10, 2021, chaired by Sen. Sheldon Whitehouse (D-RI). Walter’s testimony and the hearing video are available here. 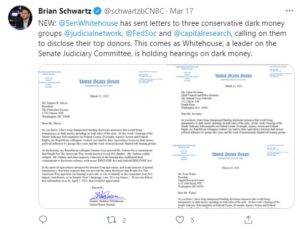 The Senator’s claim about People for the American Way, as best we can tell as this is written, appears to be false; PFAW does not seem to have disclosed any donors.

The Senator’s request to us is puzzling, given that our president explicitly rejected forced donor disclosure at the hearing.

But in the spirit of honest debate, our president has written a reply to Sen. Whitehouse’s letter, which we too are releasing to the press and posting below.

The Senator’s letter is here.

Capital Research Center’s response is here and below.

Thank you so much for writing. I am always at your service and was deeply disappointed that you never asked me a single question at your hearing this month, when you had me available for as long as you wished and had received my testimony in advance. In fact, I understood that you had planned two rounds of questions for the hearing, yet you ended the hearing after only one round, which was another disappointment, for I believe the issues you raise deserve debate.

Still more oddly, you now write to ask me to disclose my organization’s “top five funders,” even though in response to the one question I received from a Member of your party, I stated that I oppose government-coerced disclosure of donors. I trust you can understand why it is difficult to sustain the polite presumption that you are operating in good faith.

It is easy, however, to assume that you have asked my organization and two other nonprofits to disclose our donors because you want to cover up one of your friendly witnesses’ failure to keep his own promise to disclose his top five funders. Mr. Benjamin Jealous promised Senator Cruz he would “absolutely” do so, without any preconditions. He explicitly apologized for not doing so at that instant because he did not “have it on me.”[1] Since then, so far as I can determine, Mr. Jealous has failed to fulfill his promise.

His failure to disclose, your request to my organization to disclose, and your avoidance of public debate with me over coerced disclosure, all demonstrate the truth of what I testified to you: the term “dark money” in practice refers to speech that the Left wishes to silence. It is wielded as a weapon, which is why two of your friendly witnesses, Mr. Jealous and Ms. Lisa Graves, said that if there is—as I proved and Ms. Graves, without evidence, denied—more “dark money” on the left, then it would be in the Right’s interest to have the government force nonprofits to disclose their donors. The only possible inference is that forced disclosure poses possible harm both to a group that must disclose and to the donors who are disclosed.

By contrast, powerful moral arguments have long been made by multiple religious traditions and philosophers against public disclosure of donations. See, for example, Matthew 6:1-5; Mishneh Torah, Laws of Charity, 10:7–14 (citing Maimonides). Of course, in our day, there are also powerful practical arguments against public disclosure of citizens’ donations. I had expected you to ask me about this in your hearing, but since you were unwilling to engage there, let me provide my answer here:

The practical reason for opposing disclosure arises from the very real threats, felt across the political spectrum, of mob harassment and worse. And Mr. Chairman, just as your side has more groups, active for more years, and possessed of far more “dark money,” so does your side have more mobs.

Again, Mr. Chairman, I am disappointed you are apparently unwilling to discuss this or anything else of substance in my testimony in a public forum. Surely you should support public disclosure of both sides’ arguments? To further that disclosure, I would be honored to appear before your Subcommittee at any time, and I would add that my organization will happily underwrite financially a public debate over these issues with you and any others you care to enlist.

[1] The hearing video is available at https://www.c-span.org/video/?509728-1/senate-hearing-federal-courts-special-interest-group-money. At approximately 1:37:21, Senator Cruz asks Mr. Jealous, “will you today tell this committee your top five donors and how much they’ve contributed?”  To which Mr. Jealous replies, “We’d be happy to disclose that. Absolutely. Don’t have it on me. We’d be happy to disclose that. We’d be happier, Senator Cruz, if you would commit to work with us to figure out how we finally build a bipartisan agreement. You say that there’s more dark money on the left. Then it would seem to be in your best interest to help us champion transparency.” Later at approximately 1:41:20, in response to a question from Chairman Whitehouse, Mr. Jealous added, “First, let me just invite Mr. Walter to take the same challenge from Senator Cruz that I accepted, to disclose the five top donors to his organization. We’re happy to do it. Similarly, we are here because we believe that it’s time for every group to just be clear about who their donors are, to end this kind of throw-the-rock-and-hide-the-hand approach to politics in our country. It’s what 70 percent of the people of our country want. And so it’s time for there to be bilateral disarmament. The hypocrisy that you see from the right is, they claim that there’s more dark money on the left, and yet they refuse to be transparent. Well, it would seem that if the first were true, then the second would be a no-brainer.”