Big Pharma has the World Duped! 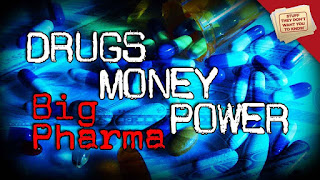 Millions in our world population have ignored, or maybe don’t even want to know the dangers that Big Pharma present in our society. Many people blindly consider that Pfizer, Moderna, AstraZeneca, BioNTech, and Johnson & Johnson are all reputable companies with untarnished records and only market “safe” drugs and more importantly vaccines. All have interesting backgrounds on fines and lawsuits except Moderna who has only been in business 10 years and hasn’t ever made a successful vaccine until now. Think about that for a minute, a Pharmaceutical Company with no experience in vaccines whatsoever gets granted permission to supply a Covid-19 vaccine on an Emergency Use license by the FDA.

In our litigious society today we read multiple disclaimers and data sheets on various products that we purchase. Why do we just blindly follow what our government says we should do? May I remind people if the Tuskegee Experiment. Authorized by the CDC and U.S. Public Health Service from 1932 to 1972 it was highly unethical and actually bordered on criminality. How about the 2009 pH1N1 vaccination that had such horrible side effects that a national monetary relief effort that was and still is supported by the taxpayer to support sufferers from Guillain-Barre Syndrome. 411 cases nationwide were reported in the following 10 years for yet another Vaccine reported to be “safe” by the FDA.

Many don’t know that not one of the pharmaceutical company’s vaccines have been approved by the FDA or any other World Organization approvals and probably won’t for years until the long term effects are known! They are merely being distributed on “emergency use” authorization right now. In a bill signed by Ronald Reagan in 1988 in an attempt to get Big Pharma to continue research for vaccines he singlehandedly released all manufactures from legal liability that result in serious injuries even death! Many people don’t even know that.

Would you sign off your rights for legal compensation for any damages incurred by any other Product in America?…….then why sign them away to a corporation that makes Billions a year?

Here’s a brief glimpse of Pfizer’s track record for safety and ethics. This is a short list, by no means inclusive of the company’s entire rap sheet.

Pfizer received the biggest fine in U.S. history as part of a $2.3 Billion plea deal with federal prosecutors for mis-promoting medicines (Bextra, Celebrex) and paying kickbacks to compliant doctors. Pfizer pleaded guilty to mis-branding the painkiller Bextra by promoting the drug for uses for which it was not approved.

In the 1990s, Pfizer was involved in defective heart valves that lead to the deaths of more than 100 people. Pfizer had deliberately misled regulators about the hazards. The company agreed to pay $10.75 Million to settle justice department charges for misleading regulators.

Pfizer paid more than $60 Million to settle a lawsuit over Rezulin, a diabetes medication that caused patients to die from acute liver failure.

In the UK, Pfizer has been fined nearly €90 Million for overcharging the NHS, the National Health Service. Pfizer charged the taxpayer an additional €48 Million per year for what should have cost €2 million per year.

Pfizer agreed to pay $430 Million in 2004 to settle criminal charges that it had bribed doctors to prescribe its epilepsy drug Neurontin for indications for which it was not approved.

In 2011, a jury found Pfizer committed racketeering fraud in its marketing of the drug Neurontin. Pfizer agreed to pay $142.1 Million to settle the charges.

Pfizer disclosed that it had paid nearly nearly 4,500 doctors and other medical professionals some $20 Million for speaking on Pfizer’s behalf.

In 2012, the U.S. Securities and Exchange Commission announced that it had reached a $45 Million settlement with Pfizer to resolve charges that its subsidiaries had bribed overseas doctors and other healthcare professionals to increase foreign sales.

Pfizer was sued in a U.S. federal court for using Nigerian children as human guinea pigs, without the childrens’ parents’ consent. Pfizer paid $75 Million to settle in Nigerian court for using an experimental antibiotic, Trovan, on the children. The company paid an additional undisclosed amount in the U.S. to settle charges here. Pfizer had violated international law, including the Nuremberg Convention established after WWII, due to Nazi experiments on unwilling prisoners.

Amid widespread criticism of gouging poor countries for drugs, Pfizer pledged to give $50 million for an AIDS drug to South Africa. Later, however, Pfizer failed to honor that promise.[1]

Dr. Michael Yeadon, a former Vice President and Chief Science Officer for Pfizer, spoke with great urgency to America’s Frontline Doctors (AFLDS) late last week warning that the drive to inject the largest possible portion of the population with experimental COVID-19 vaccines is “madness,” involves “evil,” includes “crimes against humanity” and may have the intention of “massive-scale depopulation.”

The Pfizer vaccine was never tested in trials on pregnant women or children but now Pfizer and the CDC are recommending that the vaccine be given to both even as young as 3 years old. As many as 366 miscarriages have been blamed on the vaccination in America alone.

The Bill & Melinda Gates Foundation has preached about human depopulation of the world for years, and supplied multiple grants to vaccine companies, don’t you find it odd that the vaccines are linked to miscarriages and premature deaths in the elderly?

For example, ABC News reported in 2010 that AstraZeneca, “illegally marketed the anti-psychotic drug Seroquel to children and elderly patients for uses not approved by the Food and Drug Administration.”

The AstraZeneca company, whose vaccines are now killing people with blood clots, was caught engaging in massive bribery and kickback schemes to reward doctors for prescribing its Seroquel drug for off-label use, which means the FDA had never approved the drug for those uses. As ABC News explained in 2010:

The government claims that AstraZeneca intentionally marketed the drugs — by paying kickbacks to doctors — for a variety of illnesses for which it had never been tested, including

Aggression, Alzheimer’s, anger management, anxiety, attention-deficit hyperactivity disorder, dementia, depression, mood disorder, post-traumatic stress disorder and sleeplessness. It was given to the elderly, children, veterans and inmates, who were treated as “guinea pigs,” according to the acting U.S. attorney for the Eastern District of Pennsylvania.

AstraZeneca Covid vaccines have been suspended temporarily in Europe due to unusual DVT’s in otherwise healthy males 30-40 with no previous history of blood clotting.

1,700 Vaccine related deaths so far in 2021 as reported by the Vaccine Adverse Event Reporting System as reported on the CDC site which is 71 times higher than the last average decade.

Pro-Vax doctors excuse deaths and serious complications as mere coincidence and that all these patients “would have died anyway.” That’s a pretty dismissive attitude, granted some probably would have but certainly not all but then they also use very clique phrases like “the benefits outweigh the losses” or “we are doing this for the greater good,” all phrases used by the Germans in WWII I might add!