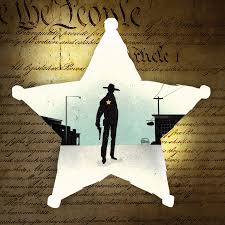 There are 3,081 County Sheriffs across America. Three States do not have County Sheriffs; Alaska, Connecticut, and Hawaii.  Alaska has no county governments, Connecticut has replaced Sheriffs with a State Marshal System, and in Hawaii, while there are no County Sheriffs, they do have Deputy Sheriffs which serve in the Sheriff’s Division of the Hawaii Department of Public Safety.(Source)

Rather than be hired or appointed, Sheriffs are democratically elected to serve the people of his or her county.  The Sheriff is the highest ranking law enforcement officer in the county, and all law enforcement operations must go through the Sheriff, including any federal operations within a Sheriff’s county.  Therefore, the County Sheriff is your last line of defense against the intrusion of unconstitutional or tyrannical behaviors by the federal government against the people.
The oath of office taken as Sheriff of a County is the same as the one taken by other peace officers, such as city police.  It is also essentially the same oath that one might take entering into the United States Military, or to serve political office.  Except, the Sheriff’s oath has a special caveat attached.  The County Sheriff is more than an officer of the law.  The position of County Sheriff carries great constitutional responsibility.  The Sheriff is both the highest ranking Peace Officer of the entire County, and is the executive officer of the county (as a Mayor is for a city, Governor for a State, and the President is for the union of states).  And, because the County Sheriff is elected, the Sheriff reports directly to the Citizens of the County.  Traditionally, the Sheriff is a constitutional officer, and the duties, responsibilities, and authorities are not subject to legislation, or federal intrusion.  Only the citizens, through constitutional amendment, can diminish a Sheriff’s duties as a constitutional officer, which means it is the Sheriff’s obligation to support, defend, and honor the United States Constitution, and the State Constitution.
The position of Sheriff carries with it the trust of the people in that he or she will defend their constitutional rights against anyone who aims to disregard those rights.  The Sheriff is expected to exercise these powers honestly, and as the opinion in an early Wisconsin case says, (State ex, rel. Kennedy v. Brunst, 26 Wis. 412, 7 Am. Rep. 84, 1870) “Now it is quite true that the constitution nowhere defines what powers, rights and duties shall attach or belong to the office of sheriff. But there can be no doubt that the framers of the Constitution had reference to the office with those generally recognized legal duties and functions belonging to it in this country, and in the territory, when the Constitution was adopted.”

During the founding of the United States everyone clearly understood the duties, responsibilities and authorities of Sheriffs, therefore it was not necessary to include a lengthy enumeration of their duties in the U.S. Constitution, or the State Constitutions. The office of the Sheriff dates back to about 500 AD in England and existed in the colonies in America from the time they were created. The constitutional offices of Sheriffs, Coroners, and Constables were clearly established in the State Constitutions of that time, and continue to this day.

What this all means is that the County Sheriff is the highest, elected constitutional authority in the county, therefore not only is it the Sheriff’s obligation to protect the natural rights of the county’s citizens, but that any outside agency, if they are to operate within a Sheriff’s jurisdiction, must seek approval from the County Sheriff, first.

In this time of expanding governments, and unchecked powers by executives and members of judiciaries, there has been a force in place unlawfully working to eliminate, or at least minimize, the Office of the Sheriff and/or their duties, responsibilities and authorities since the American War Between the States. These attempts are null and void, for those agencies do not have such an authority.

In this age of a federal government expanding its reach unconstitutionally into domestic realms, it is appropriate and vital that the County Sheriffs defend their counties taking appropriate action which may include, and perhaps even extend beyond, the local arrest of any offending federal officials, agents, officers, or politicians, for operating beyond their constitutional authorities.