Shower and thunderstorm chances will continue through the weekend as a weak cold front approaches then crosses the area. High pressure builds in behind the departing cold front Sunday into Monday, leading to drier conditions. Another cold front may approach the area during the middle of next week. 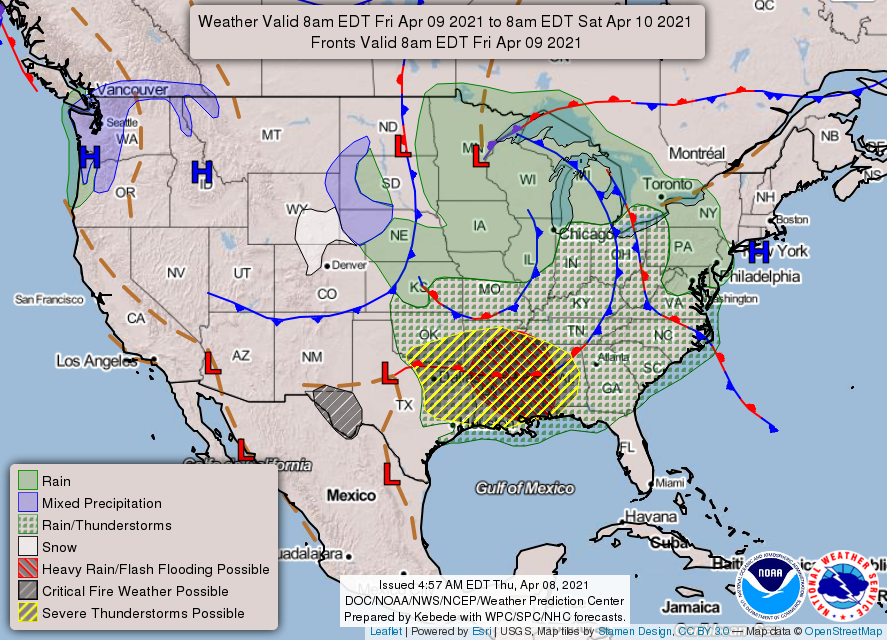 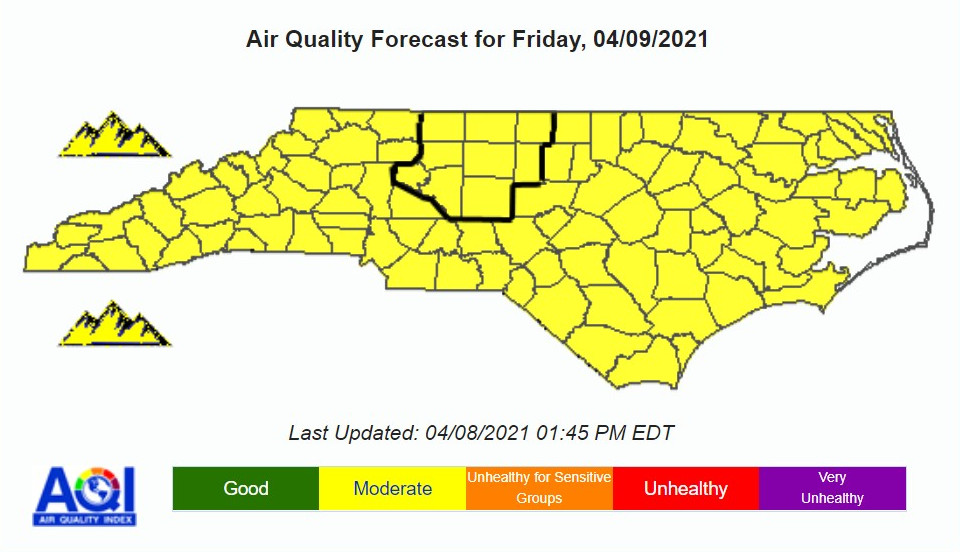 Air quality is in the extreme lower range of yellow for most of the county, with the ridges and other higher elevations today being in the lower yellow range.

April 9th is the 99th day of the year in the Gregorian calendar. 2667 days remain until the end of the year. Historical Events

190 – Dong Zhuo has his troops evacuate the capital Luoyang and burn it to the ground.
193 – Septimius Severus is proclaimed Roman Emperor by the army in Illyricum
475 – Byzantine Emperor Basiliscus issues a circular letter (Enkyklikon) to the bishops of his empire, supporting the Monophysite christological position.
537 – Siege of Rome: The Byzantine general Belisarius receives his promised reinforcements, 1,600 cavalry, mostly of Hunnic or Slavic origin and expert bowmen. He starts, despite shortages, raids against the Gothic camps and Vitiges is forced into a stalemate.
1241 – Battle of Liegnitz: Mongol forces defeat the Polish and German armies.
1288 – Mongol invasions of Vietnam: Yuan forces are defeated by Trần forces in the Battle of Bach Dang in present-day northern Vietnam.
1388 – Despite being outnumbered 16 to 1, forces of the Old Swiss Confederacy are victorious over the Archduchy of Austria in the Battle of Näfels.
1454 – The Treaty of Lodi is signed, establishing a balance of power among northern Italian city-states for almost 50 years.
1609 – Eighty Years’ War: Spain and the Dutch Republic sign the Treaty of Antwerp to initiate twelve years of truce.
1609 – Philip III of Spain issues the decree of the “Expulsion of the Moriscos”.
1682 – Robert Cavelier de La Salle discovers the mouth of the Mississippi River, claims it for France and names it Louisiana.
1784 – The Treaty of Paris, ratified by the United States Congress on January 14, 1784, is ratified by King George III of the Kingdom of Great Britain, ending the American Revolutionary War. Copies of the ratified documents are exchanged on May 12, 1784.
1860 – On his phonautograph machine, Édouard-Léon Scott de Martinville makes the oldest known recording of an audible human voice.
1865 – American Civil War: Robert E. Lee surrenders the Army of Northern Virginia (26,765 troops) to Ulysses S. Grant at Appomattox Court House, Virginia, effectively ending the war.
1909 – The U.S. Congress passes the Payne–Aldrich Tariff Act.
1914 – Mexican Revolution: One of the world’s first naval/air skirmishes takes place off the coast of western Mexico.
1917 – World War I: The Battle of Arras: The battle begins with Canadian Corps executing a massive assault on Vimy Ridge.
1918 – World War I: The Battle of the Lys: The Portuguese Expeditionary Corps is crushed by the German forces during what is called the Spring Offensive on the Belgian region of Flanders.
1937 – The Kamikaze arrives at Croydon Airport in London. It is the first Japanese-built aircraft to fly to Europe.
1939 – African-American singer Marian Anderson gives a concert at the Lincoln Memorial after being denied the use of Constitution Hall by the Daughters of the American Revolution.
1940 – World War II: Operation Weserübung: Germany invades Denmark and Norway.
1940 – Vidkun Quisling seizes power in Norway.
1942 – World War II: The Battle of Bataan ends. An Indian Ocean raid by Japan’s 1st Air Fleet sinks the British aircraft carrier HMS Hermes and the Australian destroyer HMAS Vampire.
1945 – Execution of Dietrich Bonhoeffer, anti-Nazi dissident and spy, by the Nazi regime.
1945 – World War II: The German heavy cruiser Admiral Scheer is sunk by the Royal Air Force.
1945 – World War II: The Battle of Königsberg, in East Prussia, ends.
1945 – The United States Atomic Energy Commission is formed.
1947 – The Glazier–Higgins–Woodward tornadoes kill 181 and injure 970 in Texas, Oklahoma, and Kansas.
1947 – The Journey of Reconciliation, the first interracial Freedom Ride begins through the upper South in violation of Jim Crow laws. The riders wanted enforcement of the United States Supreme Court’s 1946 Irene Morgan decision that banned racial segregation in interstate travel.
1947 – United Nations Security Council Resolution 22 relating to Corfu Channel incident is adopted.
1948 – Jorge Eliécer Gaitán’s assassination provokes a violent riot in Bogotá (the Bogotazo), and a further ten years of violence in Colombia.
1948 – Fighters from the Irgun and Lehi Zionist paramilitary groups attacked Deir Yassin near Jerusalem, killing over 100.
1952 – Hugo Ballivián’s government is overthrown by the Bolivian National Revolution, starting a period of agrarian reform, universal suffrage and the nationalization of tin mines
1957 – The Suez Canal in Egypt is cleared and opens to shipping following the Suez Crisis.
1959 – Project Mercury: NASA announces the selection of the United States’ first seven astronauts, whom the news media quickly dub the “Mercury Seven”.
1960 – Dr Hendrik Verwoerd, Prime Minister of South Africa and architect of apartheid, narrowly survives an assassination attempt by a white farmer, David Pratt in Johannesburg.
1967 – The first Boeing 737 (a 100 series) makes its maiden flight.
1969 – The first British-built Concorde 002 makes its maiden flight from Filton to RAF Fairford.
1980 – The Iraqi regime of Saddam Hussein kills philosopher Muhammad Baqir al-Sadr and his sister Bint al-Huda after three days of torture.
1981 – The U.S. Navy nuclear submarine USS George Washington accidentally collides with the Nissho Maru, a Japanese cargo ship, sinking it.
1989 – Tbilisi massacre: an anti-Soviet peaceful demonstration and hunger strike in Tbilisi, demanding restoration of Georgian independence, is dispersed by the Soviet Army, resulting in 20 deaths and hundreds of injuries.
1990 – An IRA bombing in County Down, Northern Ireland, kills three members of the UDR.
1990 – The Sahtu Dene and Metis Comprehensive Land Claim Agreement is signed for 180,000 square kilometres (69,000 sq mi) in the Mackenzie Valley of the western Arctic.
1991 – Georgia declares independence from the Soviet Union.
1992 – A U.S. Federal Court finds former Panamanian dictator Manuel Noriega guilty of drug and racketeering charges. He is sentenced to 30 years in prison.
2003 – Iraq War: Baghdad falls to American forces.
2009 – In Tbilisi, Georgia, up to 60,000 people protest against the government of Mikheil Saakashvili.
2013 – A 6.1–magnitude earthquake strikes Iran killing 32 people and injuring over 850 people.
2013 – At least 13 people are killed and another three injured after a man goes on a spree shooting in the Serbian village of Velika Ivanča.
2014 – A student stabs 20 people at Franklin Regional High School in Murrysville, Pennsylvania.
2017 – The Palm Sunday church bombings at Coptic churches in Tanta and Alexandria, Egypt, take place.
2017 – After refusing to give up his seat on an overbooked United Express flight, Dr. David Dao Duy Anh is forcibly dragged off the flight by aviation security officers, leading to major criticism of United Airlines.