“Those Asian officers who stand by and observe everything I previously mentioned,” Christopher Dorner wrote in his manifesto. “You are a high value target as well.”

The black mass shooter’s first target was Monica Quan, the Asian-American daughter of Randall Quan, the first Chinese-American to become an LAPD captain. 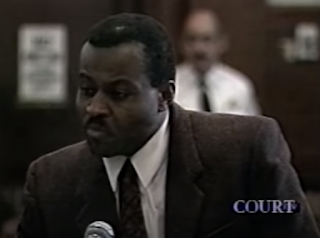 Monica was shot three times in the back of the head. Afterward, Dorner called her father and told him that he “should have done a better job of protecting his daughter.”

The media coverage of Dorner’s shooting spree focused on the racist rants about white police officers (or caucasians) in his manifesto, but there was very little discussion of his hatred for Asian-Americans even though he had named them as targets in his hateful screed.

When black mass shooters kill Asian people, the media tries to gloss over it.

Colin Ferguson’s mass shooting in the 90s on a New York train is remembered largely for the decision by his radical leftist lawyers, William Kunstler and Ron Kuby to use the “Black Rage” defense. Shortly before his death, Kunstler argued that black people are entitled to rage.

But what is often forgotten is that two of the six people whom Ferguson murdered were Asian.

Maria Theresa Tumangan Magtoto was the daughter of an official with the Philippine Senate. Mi Kyung Kim, a Korean-American, had been working as a library assistant at Columbia.

A third of the men and women whom Ferguson killed were Asians.

This wasn’t a coincidence. Notes in Ferguson’s pockets were scribbled with rants about white people, “Uncle Toms”, and “Chinese” people. None of the Asian-Americans he shot were actually Chinese, but the racist gunman didn’t seem to care.

“When Louis Farrakhan mentioned Mr. Ferguson at a New York rally on Dec. 18, his audience erupted in an ovation”, “The Hate That Hate Begot”, a New York Daily News article, noted.

When John Allen Muhammad went on his rampage, his victims included Hong Im Ballenger, a Korean immigrant who ran a beauty supply store. As the D.C. sniper’s last name showed, he had been a member of Farrakhan’s black supremacist Nation of Islam hate group.

The Nation of Islam believes that non-black people were created through a eugenics program by a mad scientist from the original black race. “Asians want to know if we are targeting all Asian business. We know Asians have targeted Black communities to exploit. The JIG IS UP,” Jeffery Muhammad, the Nation of Islam leader in Dallas, had warned.

This sort of anti-Asian hate extends into the highest reaches of the Democrats and the media.

Before Al Sharpton was an MSNBC host, a Democrat presidential candidate with a DNC speaking slot, and a Democrat kingmaker, he was leading boycotts of Korean stores.

While the motive there was antisemitism and the victims were mostly young Latino women, the fire was followed by threats of violence against Korean stores in Harlem.

And Powell had cut his teeth on black supremacist boycotts of Asian businesses.

In a previous boycott incident at the Victory Fish Market, he had allegedly fractured the skull of Kim Soo Yea: the wife of the store owner.

The National Action Network has since been addressed by every top Democrat from Obama to Biden to Elizabeth Warren and Kamala Harris.

The Democrats have jumped eagerly on the spa shootings. Their media insists that the shooter could not have been a sex addict motivated by his own disorder, as he said, but that he must be a racist who hated Asian people, while refusing to make a reckoning with the publicly stated hatred for Asian people of black mass shooters like Colin Ferguson and Christopher Dorner.

The spa shootings emerged as a convenient distraction from the protests over the escalating criminal assaults on Asian people in California and New York by mostly black perpetrators.

“The perpetrator in some cases has been African American,” San Francisco Mayor London Breed had said. “And as an African American woman, as the mayor of your city, I am here to hold everyone accountable.”

That was not the media’s agenda.

Back in February, Time was scolding Asian-American victims and telling them that they needed to figure out “how to tackle anti-Asian violence without relying on law enforcement institutions that have historically targeted Black and brown communities”.

After the spa shootings, headlines like “Advocates Discourage Anti-Black Sentiment Amid Violence Against Asians” and the clumsy attempts to falsely ascribe attacks by black men on elderly Asian people to President Trump and whiteness (“This violence is caused by a system that makes working people compete against each other for scraps of what the wealthy possess,” Oakland City Councilwoman Carroll Fife) gave way to political relief for Democrats.

The media spread the false claim that a police spokesman had dismissed the attack as a case of the perpetrator having a “bad day”. Even though neither the police nor the FBI had found a racial motive, the media spread its racism narrative without even the tiniest trace of evidence.

It makes little difference to the actual case. Even now, at the peak of the Democrat pro-crime policy wave where criminals are let loose for slashings and robberies, a mass murderer is never going to set foot outside the prison system whether or not he’s charged with a hate crime.

But there’s a great deal politically at stake for the Democrat media which is seizing the opportunity to deflect a politically problematic crisis back into politically safe waters.

Racist killers don’t make a big secret of their hate. White supremacist mass shooters like Dylann Roof at the Mother Emanuel church in Charleston and Robert Bowers at the Tree of Life synagogue in Pittsburgh, or black supremacist shooters, like Micah X. Johnson in Dallas or David Anderson at the Kosher market in Jersey City, left their ugly beliefs in public view.

Dorner and Ferguson had notes and manifestos.

The media spends a lot more time talking about politically convenient mass killers than inconvenient ones. It’s why Robert Bowers got so much more coverage than David Anderson. It’s also why Colin Ferguson and Dylann Roof received a very different reception.

It is wholly possible to be an evil person without being a bigot. The average serial killer is not a racist. He’s just wholly devoid of empathy and enjoys the pain and suffering of others. Not every crime needs to be viewed through the narrow academic lens of prejudice: let alone ‘whiteness’.

But much as Communists couldn’t see the world in any terms other than class, Wokies can’t understand any event except by shoving it into their identity politics prism. Some things fit into that prism, others can be made to fit with enough fake news, and still others will never fit and have to be ignored, covered up, and buried at midnight in the media graveyard of dead stories.

The media is no longer in the business of reporting stories, but of politically reconciling them in the same way that Pravda reporters had to reconcile events with Marxism-Leninism. The media politically confronts events, and tries to understand them, before distilling their understanding.

Journalism has become an academic enterprise of grad students treating every event like an opportunity to unload critical race theory lectures so that the public can be properly educated.

But now that the media is suddenly interested in mass shooters who target Asians, it might want to revisit Ferguson and Dorner who actually targeted Asians and wrote about doing it, instead of trying to ascribe a racial motive to a monster who left behind no evidence of being a bigot.