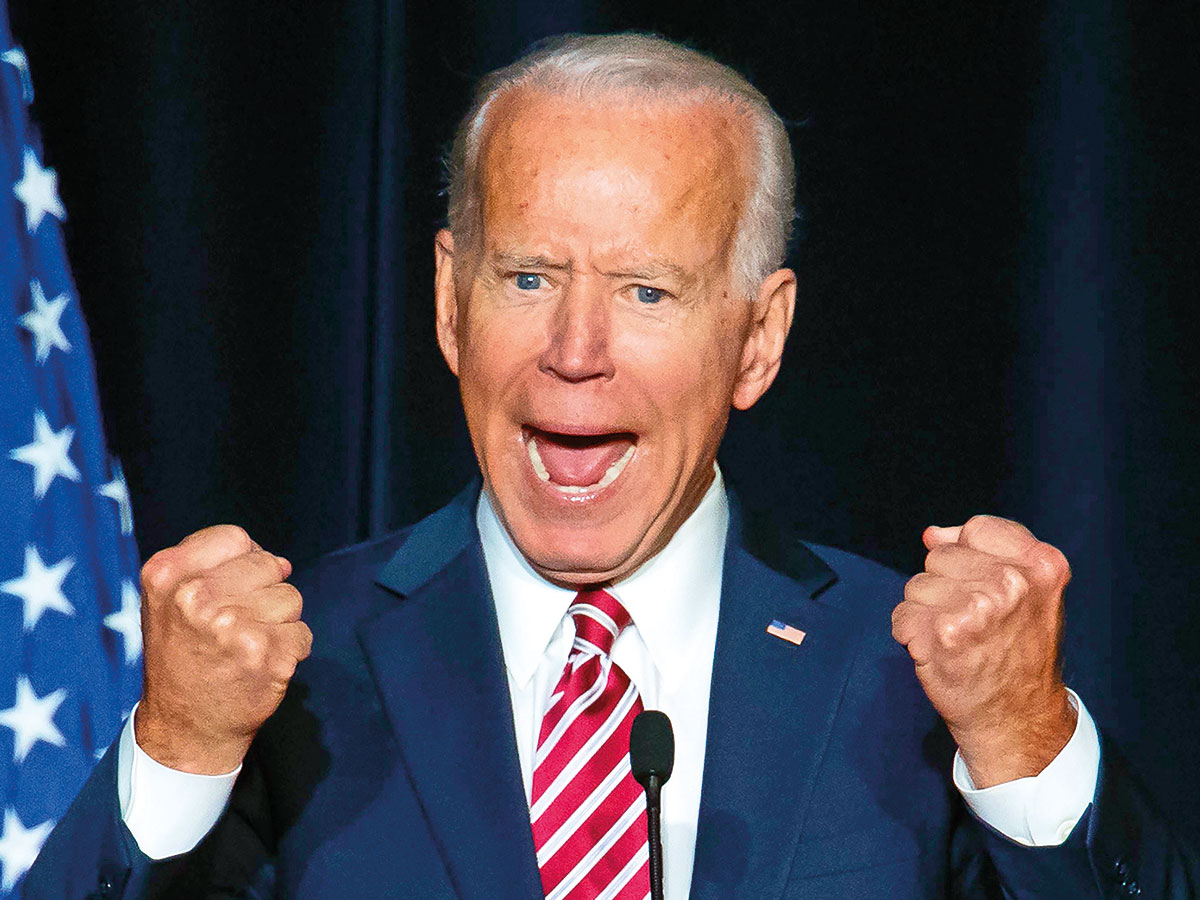 In spite of all his words about the US supporting Israel’s security, President Biden’s actions prove the reverse.

After telling reporters at a White House press conference that “there is no shift in my commitment … to the security of Israel” His remarks that followed proved his real position is exactly the opposite. “I’ll tell you what there is a shift in. The shift is … we still need a two-state solution. It is the only answer. The only answer.”

That is as much as Biden saying he wants Israel forced back to indefensible borders…or as Israeli diplomat  Abba Eban  appropriately once called the pre 1967 borders, “the Auschwitz Lines.”

The above is a view of Tel Aviv and Israel’s heavily populated central valley, including Israel’s airports.

If Israel was forced back to the pre 1967 lines, they would have no way of defending their country which would be surrounded by hostile enemies on all sides…with a width of only nine miles. In addition the ‘Palestinians’ want East Jerusalem. If Israel were to give it to them, West Jerusalem would be an easy target, and all of Israel’s holy sites would be under the control of Arabs who hate Jews  and want them  exterminated. The last time that happened, in 1948, every Jew was ethnically cleansed, the Western Wall was used as a latrine and trash dump, and 28 historic synagogues were burned to the ground.

There would also be 500,000 plus homeless  Jewish refugees. trying to find jobs and homes in an already crowded and vulnerable  country.

To make a long story short, what Joe Biden wants is exactly what Barack Obama wanted and said openly once he was elected… ‘distance between Israel and the US.’  Anyone who advocated a ‘two state solution’ in land that already belongs to Israelis ignoring  the fact that according to the San Remo Accords which the Arabs signed, the 22% of the former Ottoman  Palestine Mandate west of the Jordan River, as opposed to  the Arabs  78%of the Mandate East of the River which became Jordan. This agreement was reaffirmed  in Article 80 of the UN Charter , and has never been removed from the Charter.

The ‘Palestinians’ still believe that “Palestine” must be liberated from the Jews from the Jordan River to the Mediterranean Sea. They have no interest in ‘peaceful coexistence what so ever and have proved that ever since Oslo.

The conclusion is that anyone who favors a ‘two state solution’ wants Israel destroyed. And considering the Jewish population of Israel, that means thousands of Jewish deaths, since Biden and his fellow creatures know the ‘Palestinians’, Hamas and Hezbollah have no intention of peaceful coexistence. What Biden his fellow Democrats and Obama really want is a one state solution….one without Jews. And if that’s not antisemitism, what is?

Biden even BS’d the reporters even further. He also said that  Democrats who want his administration to rebuke Israel and end a planned arms deal between the United States and Israel, saying, “I think that my party still supports Israel.” Sure they do.  There are already motions in congress to end all military sales and aid to Israel, including the arms deal Biden promised Netanyahu in exchange for the ceasefire with Hamas and any future sales.

The Democrat Party is now the US Equivalent of the UK’s Labour Party when it comes to pure Jew hatred.

“We are horrified by Israel’s use of disproportionate and deadly force against Palestinians in Gaza which have already resulted in the killings of dozens of Palestinians, including children,” the statement reads (pdf).

And Hamas didn’t use deadly force against Israeli civilians?

Notice they make no notice of the use by Hamas of children as human shields , or of the amount of 400 plus Hamas rockets that misfired and killed civilians in Gaza*.(A frequent tactic by Hamas for propaganda purposes). or of Israeli children who were murdered by Hamas’s sneak  attack. )

Sen. Bernie Sanders (I-Vt.) and Reps. Alexandria Ocasio-Cortez (D-N.Y.) and Rashida Tlaib (D-Mich.) also moved to block a planned weapons sale to Israel. And they have lots of supporters.

Notice something else. When Donald Trump was president, he engineered the Abraham Accords, which brought peace to the region.  The reasoning is quite easy to understand. As long as Israel had ironclad American support of President Trump, who unlike Joe Biden abided by The Taylor Force law, which prohibits US aid to countries or groups like Hamas and the PLO who support terrorism and stopped funding the PLO, it had the effect of creating a peaceful environment, except for the fact that Mahmoud Abbas refused any negotiations.

And the Emirate Countries, Sudan, etc were happy to establish relations with Israel, while the Saudis were just a step away. After all, they wanted to be friendly with Israel and if America supported Israel, well and good, we want that too! But now, after Biden gave hundreds of millions of US dollars* to the PLO and Hamas, who definitely got a share, and had begun refinancing UNRWA, whose ‘mission is basically educating ‘Palestinian’ children that murdering Jews is a holy act and making Abbas’s thesis saying the Holocaust was a hoax required reading, the Emirates and certainly the Saudis reason differently. Now, the story is that since America doesn’t support Israel anymore, there really no need to get too involved with Israel. As for the Saudis, they’re now trying to work out something with Iran, who they see as Biden’s  new friend.

So what comes next?  Biden’s obvious next step is to ally with EU countries like Ireland and Britain that have always hated Israel and attempt to threaten Israel with sanctions and perhaps even a military intervention unless they go back to the  pre 1967 lines and give Hamas and the Palestinians what they want. Again, this is exactly what Barack Obama wanted, which is why he and his lackeys pushed through resolution 2334, which no sovereign country with any desire to survive would have obeyed. Since it wasn’t a series 7 security council resolution, Israel had no reason to obey this anti-semitic resolution with no teeth. Nor will Israel do so in the future, since they’re not suicidal.

Essentially, Biden is doing the same thing French President DeGaulle did to Israel in 1967 when he cut off all arms sales to Israel without warning on the eve of the Six Day War, even shipments Israel had already paid for. France was Israel’s only arm supplier at the time.

So what is Israel’s solution? They obviously cannot depend on Joe Biden, who is simply the figurehead for Obama’s 3rd term. His promise to replenish Israel’s iron Dome defense missiles is not anything Israel can depend on. But his promise to give Hamas millions of dollars in aid to rebuild will definitely be kept. And that money will mostly be spent on more acquiring missiles, repairing terrorist  tunnels on Israel’s border and other weaponry. It is also very probable that Biden will go back to the ‘Iran deal’, take away Iran’s sanctions and give them a clear path to acquiring nuclear weapons.

This is one reason why the ceasefire was a mistake on Israel’s part, since they will only have to fight a recovered Hamas again in the near future. Peace comes withvictory

While there are still a number of US military leaders and congress members who are pro Israel, they are not the ones with the power to change anything just now.

The best thing Israel could do now is strengthen the home front and prepare to defend itself alone. That could include the following:

1) A number of PLO paid thugs rioted in Israelis cities during the attack, especially in Lod, Jerusalem, Jaffa and Haifa among other places. Many of them aren’t citizens, but even those who are and bit the hand feeding them need to be extradited from Israel. No country can survive with a fifth column like that within its borders.

2) Israel needs to stop being dependent on the US as an arms supplier to the largest degree possible . Israel has it’s own state of the art arms industry perfectly capable of supplying Israel’s needs. And spare  parts on US made articles Israel needs can certainly be re-engineered if necessary. Israel should also exercise great caution on any intel they give the US. As John Kerry showed them, the new regime is not to be trusted….with anything.

3) Israel needs to make it clear that a ‘two state solution’ is suicidal for them, that they will no longer tolerate having  terrorist enclaves on their borders…and that ANY FUTURE ATTACKS, terrorist or otherwise  WILL BE AN ACT OF WAR and fought to the end.  Israel should know by now that negations with the PLO and Hamas are futile. The only reason the sham goes on is to pacify people like Obama and Biden. And how well that worked is now obvious!   A superb opportunity to end the problem of Gaza once and for all has been missed. Ditto with Judea and Samaria. Hopefully that won’t be repeated.

4) Israel should expel the Jordanian Wakh from the Temple Mount and appoint a committee consisting of Jews, Muslims of proven loyalty who are Israeli citizens and perhaps Christians and Druse to administer the Temple Mount peacefully for all faiths. As for Jordan’s Wakh? They have been tested and found unworthy and untrusty.

5)Israel needs to improve the protection of it’s borders.

6) Eventually, Israel will have to come to battle with Hamas and the PLO. Those plans should be worked on now if they aren’t already done.

Rob Miller writes for Joshuapundit. His articles have appeared in The Jerusalem Post, The Washington Examiner, American Thinker, The Los Angeles Times, The Atlanta Journal-Constitution, The San Francisco Chronicle, Real Clear Politics, The Times Of Israel, Breitbart.Com, Yediot and other publications.