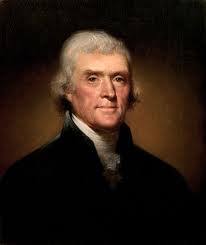 After Thomas Jefferson was elected to President in a very controversial 1800 Election, the Danbury Baptist denomination from the State of Connecticut contacted the third President of the United States to congratulate him on his victory in the election, and to ask for his help.  The Congregationalists (a branch from the Puritans) controlled the State of Connecticut and in that State they were the established religion.  This meant that tax dollars went to the Congregationlist Church, and you had to be a member of the established church in order to vote or hold political office.  The Baptists were being treated as second class citizens, and they were seeking assistance from President Jefferson because of his history of defending religious freedom, which included ending the domination of an established church in Virginia with his 1786 Act for Establishing Religious Freedom.  In his response to the Danbury Baptists Jefferson used the phrase “separation of church and state,” meaning that it was a State issue, and the federal government, which now included him as its President, could not assist the Danbury Baptists in toppling the Congregationalist grip on the State of Connecticut.  That phrase about church and state has been since perverted to mean something else, of which Jefferson never originally intended.

At the time of the American Revolution the Church of England served as the Established Church in the southern English Colonies under British rule.  While America was historically founded by Englishmen seeking religious freedom, at the time of the revolutionary period, eleven of the thirteen States had established churches.  Only Pennsylvania and Rhode Island practiced religious freedom.  In Pennsylvania, while the Quakers dominated as the majority in terms of population, they never established themselves as the State Church.  However, being a Christian was the rule when it came to voting, or holding office.  Rhode Island prided itself in that it did not have an established church, and there was no prerequisite of being a person of Faith in order to participate in local civics.

The Virginia Declaration of Rights of 1776 instituted the principle of religious liberty in Virginia, but the document didn’t break the church’s hold on Virginia at the time, and the rest of the States did not seek state-initiated religious freedom statutes until well after the Revolution.  Connecticut, where the battle between the Danbury Baptists and the Congregationalists began in the infancy of Thomas Jefferson’s presidency, didn’t achieve religious freedom until the writing of their first State Constitution in 1818.

Jefferson’s efforts in Virginia were coupled with endeavors by James Madison seeking the same end.  While bitter opposition faced the idea of disestablishment, not only from the Anglicans but also from other dissenting churches, it was not until January 16, 1786, that the combined efforts of James Madison and Thomas Jefferson succeeded in pushing through in Virginia the famous statute of religious liberty.  Jefferson, while considering himself a Christian, was not a fan of organized religion, and claimed to champion intellectual freedom and intellectual individuality.  He later noted that his statute in Virginia served as one of his most notable contributions to the early years of American History.

Thomas Jefferson drafted The Virginia Act for Establishing Religious Freedom in 1779 three years after he penned the Declaration of Independence. The act was not passed by the General Assembly of the Commonwealth of Virginia until 1786. Jefferson was by then in Paris as the U.S. Ambassador to France.  Opposition to The Act was led by a group with Patrick Henry serving as its leader.  Henry’s group sought to convince the Virginia legislature to pass a bill that would have assessed all the citizens of the State to support a plural establishment.

Just prior, in 1785, James Madison wrote and presented the Memorial and Remonstrance Against Religious Assessments, which gained momentum as a powerful argument against state supported religion.  I believe Madison’s piece may have served as the catalyst that pushed over the top Jefferson’s offering.  Jefferson’s religious freedom bill passed the General Assembly just a few months after Madison’s argument reached the public.

The Following is the Text of the Virginia Act for Establishing Religious Freedom, approved January 16, 1786.

Well aware that Almighty God hath created the mind free; that all attempts to influence it by temporal punishments or burdens, or by civil incapacitations, tend only to beget habits of hypocrisy and meanness, and are a departure from the plan of the Holy Author of our religion, who being Lord both of body and mind, yet chose not to propagate it by coercions on either, as was in his Almighty power to do; that the impious presumption of legislators and rulers, civil as well as ecclesiastical, who, being themselves but fallible and uninspired men, have assumed dominion over the faith of others, setting up their own opinions and modes of thinking as the only true and infallible, and as such endeavoring to impose them on others, hath established and maintained false religions over the greatest part of the world, and through all time; that to compel a man to furnish contributions of money for the propagation of opinions which he disbelieves, is sinful and tyrannical; that even the forcing him to support this or that teacher of his own religious persuasion, is depriving him of the comfortable liberty of giving his contributions to the particular pastor whose morals he would make his pattern, and whose powers he feels most persuasive to righteousness, and is withdrawing from the ministry those temporal rewards, which proceeding from an approbation of their personal conduct, are an additional incitement to earnest and unremitting labors for the instruction of mankind; that our civil rights have no dependence on our religious opinions, more than our opinions in physics or geometry; that, therefore, the proscribing any citizen as unworthy the public confidence by laying upon him an incapacity of being called to the offices of trust and emolument, unless he profess or renounce this or that religious opinion, is depriving him injuriously of those privileges and advantages to which in common with his fellow citizens he has a natural right; that it tends also to corrupt the principles of that very religion it is meant to encourage, by bribing, with a monopoly of worldly honors and emoluments, those who will externally profess and conform to it; that though indeed these are criminal who do not withstand such temptation, yet neither are those innocent who lay the bait in their way; that to suffer the civil magistrate to intrude his powers into the field of opinion and to restrain the profession or propagation of principles, on the supposition of their ill tendency, is a dangerous fallacy, which at once destroys all religious liberty, because he being of course judge of that tendency, will make his opinions the rule of judgment, and approve or condemn the sentiments of others only as they shall square with or differ from his own; that it is time enough for the rightful purposes of civil government, for its officers to interfere when principles break out into overt acts against peace and good order; and finally, that truth is great and will prevail if left to herself, that she is the proper and sufficient antagonist to error, and has nothing to fear from the conflict, unless by human interposition disarmed of her natural weapons, free argument and debate, errors ceasing to be dangerous when it is permitted freely to contradict them.

Be it therefore enacted by the General Assembly, That no man shall be compelled to frequent or support any religious worship, place, or ministry whatsoever, nor shall be enforced, restrained, molested, or burdened in his body or goods, nor shall otherwise suffer on account of his religious opinions or belief; but that all men shall be free to profess, and by argument to maintain, their opinions in matters of religion, and that the same shall in nowise diminish, enlarge, or affect their civil capacities.

And though we well know this Assembly, elected by the people for the ordinary purposes of legislation only, have no powers equal to our own and that therefore to declare this act irrevocable would be of no effect in law, yet we are free to declare, and do declare, that the rights hereby asserted are of the natural rights of mankind, and that if any act shall be hereafter passed to repeal the present or to narrow its operation, such act will be an infringement of natural right.