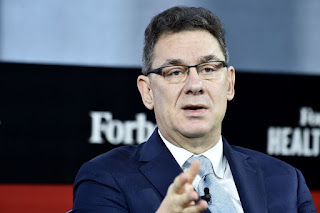 Pfizer CEO Albert Bourla hasn’t received his company’s Covid-19 vaccine yet and neither has his management team, siting that they wouldn’t butt in line to get it. Mr. Bourla is 59 years old, and more than entitled to get the vaccine. He made this claim about butting in line earlier this year but recently repeated the same stance.

When added to past Pfizer VP and Chief Scientist for Allery and Respiration Dr. Michael Yeadon is sounding more and more like he will never get the vaccine. He makes several points about the Covid Virus and its variants[WU1] . He went on to say;

2.    Yet, governments around the world are repeating this lie, indicating that we are witnessing not just “convergent opportunism,” but a “conspiracy.” Meanwhile media outlets and Big Tech platforms are committed to the same propaganda and the censorship of the truth.

3.    Pharmaceutical companies have already begun to develop unneeded “top-up” (“booster”) vaccines for the “variants.” The companies are planning to manufacture billions of vials, in addition to the current experimental COVID-19 “vaccine” campaign.

4.   Regulatory agencies like the U.S. Food and Drug Administration and the European Medicines Agency, have announced that since these “top-up” vaccines will be so similar to the prior injections which were approved for emergency use authorization, drug companies will not be required to “perform any clinical safety studies.”

5.    Thus, this virtually means that design and implementation of repeated and coerced mRNA vaccines “go from the computer screen of a pharmaceutical company into the arms of hundreds of millions of people, [injecting] some superfluous genetic sequence for which there is absolutely no need or justification.”

6.   Why are they doing this? Since no benign reason is apparent, the use of vaccine passports along with a “banking reset” could issue in a totalitarianism unlike the world has ever seen. Recalling the evil of Stalin, Mao, and Hitler, “mass depopulation” remains a logical outcome.

7.    The fact that this at least could be true means everyone must “fight like crazy to make sure that system never forms.”

One could think he might a fringe end thinker, but to be honest his statements mirror his past critical thinking skills that got him to the position he was in before her retired. He also when on so far to say[WU2] ;

“[And if you recognize that our governments are involved in a major verifiable lie], don’t just turn your computer off and go to supper. Stop. Look out the window, and think, ‘why is my government lying to me about something so fundamental?’ Because, I think the answer is, they are going to kill you using this method. They’re going to kill you and your family.

“The eugenicists have got hold of the levers of power and this is a really artful way of getting you to line-up and receive some unspecified thing that will damage you. I have no idea what it will actually be, but it won’t be a vaccine because you don’t need one. And it won’t kill you on the end of the needle because you would spot that.

Wow! The statements from Yeadon and Bourla really makes one think. IF THE INSIDERS AT PFIZER THINK THIS WAY, how should we think?