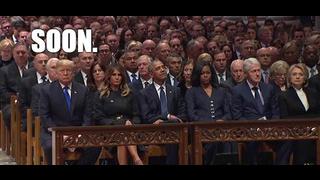 Do you remember how these really weird envelopes were passed out at the funeral and only certain Deep State cabal members got one?

Right-wing conspiracy theorist and radio host Dave Janda appeared on Greg Hunter’s “USA Watchdog” program last week, where he declared that the nomination of William Barr to the position of attorney general is confirmation that former president George W. Bush has “flipped” and is now working with President Trump to take down the “deep state” in exchange for protection for his family.

While promoting the right-wing conspiracy theory that the Obamas, Clintons, and various other high-ranking officials who attended the funeral of former president George H.W. Bush last month received mysterious envelopes hidden in their programs, allegedly informing them that they are under indictment, Janda asserted that George W. Bush met at the White House with Trump the day before the service to cut a deal to reveal what he knows about the deep state’s involvement in everything from human trafficking to drug running..

n the latest drop we get a possible reason why Vice President Mike Pence and his wife Karen received an envelope at George Bush’s funeral last year and why Lt. Gen Michael Flynn was set up by the FBI.

The link to a Sara Carter story shows additional texts between disgraced ex-FBI Special Agent Peter Strzok and his lover ex-FBI Attorney Lisa Page attempting to develope and inside the White House spy during the Trump transition team after the 2016 election.

In quite an extensive article Cater lays out what Strzok and Page had in mind.