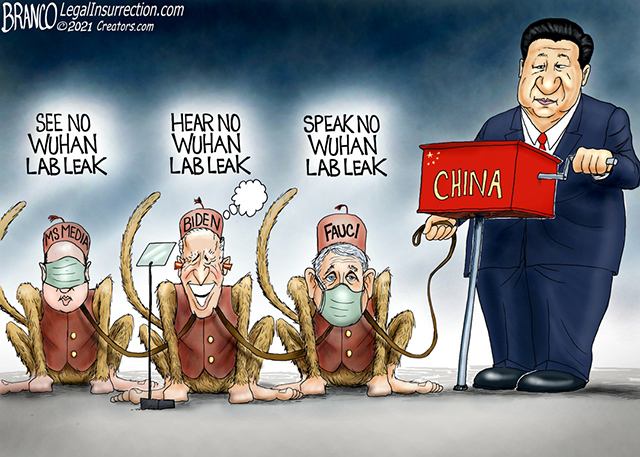 Public health authorities from the U.S. National Institutes of Health (NIH) and the British Wellcome Trust determined the origin of SARS-CoV-2 before any investigation could occur, before any evidence was brought forth. According to the Fauci email release, these public health officials were panicked about the possibility that SARS-CoV-2 was engineered and funded by them. Trying to control the narrative, these authorities scrambled into emergency meetings where they would go on to produce two internationally-recognized, highly influential documents of propaganda to quash the lab leak theory.

From the onset of the covid-19 scandal, the “natural origin theory” was considered unwavering doctrine, and any other inquiry into the virus’s origins was considered heresy. Media organizations and social media companies worked in unison to suppress the lab leak theory and censor any discussion of coronavirus gain-of-function experiments at the Wuhan lab. Now, after Fauci’s emails were released, we have a much clearer picture of how and why this occurred.

The dominance of the “natural origin theory” can be traced back to an important teleconference that was organized by the director of the National Institutes of Allergy and Infectious Disease, Dr. Anthony Fauci, and the director of the British Wellcome Trust, Dr. Jeremy Farrar. The meeting was held on February 1, 2020. Based on Fauci’s private emails, we now know why the meeting was called to action. Just two days prior, Fauci was privately concerned about an article in Science that referenced an article in Nature about gain-of-function coronavirus experiments. The article pointed out that Fauci’s organization had funded experiments on “chimeric viruses” at the Wuhan lab.

Two days after the Fauci-Farrar emergency teleconference, the director of the White House Office of Science and Technology Policy (OSTP), Kelvin Droegemeier, asked the National Academies of Sciences, Engineering, Medicine (NASEM) to “help determine the origins of 2019-nCoV.”

NASEM immediately brought in a group of hand-picked virology “experts” to quell any “conspiracy theories” on the origin of the pandemic. The meeting included “officials from the FBI, the Office of the Director of National Intelligence, along with the NIH and the Department of Health and Human Services.” The meeting was used to affirm the “natural origin theory” and suppress public inquiry into the different possibilities behind the origin of SARS-CoV-2. The one-hour meeting included a presentation by Fauci and included the likes of Dr. Peter Daszak and Kristian Andersen, the men behind the propaganda on covid’s “natural origins.”

These “experts” in virology crafted two articles that formed the basis for all future assumptions and propaganda on the matter. After the meeting, public health officials across Europe, the US, and the World Health Organization stopped discussing the lab leak theory. Facebook CEO Mark Zuckerberg even offered Dr. Fauci an exclusive platform to provide authoritative information on the origin of covid-19. This propaganda campaign permitted widespread censorship across Facebook covid’s origins and on others matters of health, liberty and human rights. This deal was also disclosed in the Fauci email release from March and early April of 2020.

There was a coordinated propaganda campaign to coverup the lab leak

The first piece of propaganda includes an open letter to the public, published in the Lancet on February 19, 2020. The author of the letter is Dr. Peter Daszak, President of the New York nonprofit, EcoHealth Alliance. Daszak is a prominent gain-of-function coronavirus researcher who funneled Fauci-approved grants to the Wuhan lab. Daszak previously bragged how easy it is to engineer the spike protein of coronaviruses to make them more infectious and lethal. Instead of investigating his own coronavirus research back to the Wuhan lab, Daszak shut down any debate and called for unilateral “solidarity with all scientists and health professionals in China.”

“We stand together to strongly condemn conspiracy theories suggesting that COVID-19 does not have a natural origin,” the letter states. Twenty-seven scientists were coerced to sign the letter, or risk becoming socially ostracized in their career. Daszak threatened anyone who disagreed by labeling their inquisitions “misinformation.” The letter affirmed, “transparent sharing of data on this outbreak is now being threatened by rumours and misinformation around its origins.”

In the emails, Daszak mulled his options, deciding on the best path to deceive the public. Before the letter went live, he considered not signing it “so it has some distance from us and therefore doesn’t work in a counterproductive way.” Daszak wrote in the emails, “We’ll then put it out in a way that doesn’t link it back to our collaboration so we maximize an independent voice.”

Daszak also debated whether his colleague Ralph Baric, should sign the document. Baric is the virologist from the University of North Carolina who collaborated with Wuhan Institute of Virology director Shi Zheng-Li on gain-of-function experiments. In a Feb. 6, 2020 email, Daszak wrote that there was “no need for you to sign the ‘Statement’ Ralph!!” to which Baric responded: “I also think this is a good decision. Otherwise, it looks self-serving and we lose impact.” The authors of the letter declared “no competing interests” and did not disclose their affiliations, but on further review, five signers were directly affiliated with Daszak’s EcoHealth Alliance and five more worked for Jeremy Farrar’s Wellcome Trust.

The second carefully-crafted piece of propaganda that deceived the world was published in Nature on March 17, 2020. The article was called, “The Proximal Origin of SARS-CoV-2.” This article was authored by none other than Kristian Andersen and four other scientists who directly participated in the Fauci/Farrar teleconference on Feb. 1 (a revelation also obtained from a Feb 1, 2020 email from Farrar). The article threatened the scientific community to agree on the “natural origin theory.” Interestingly, the only author who wasn’t at the Fauci-Farrar teleconference ultimately recanted his position. Strangely enough, it was Andersen who emailed Fauci before the February 1 teleconference, pointing to evidence that SARS-CoV-2 could have been engineered. “One has to look really closely at all the sequences to see that some of the features (potentially) look engineered,” Andersen wrote to Fauci before the propaganda campaign was launched.

The emails show that there was significant internal correspondence between the NASEM and the virology “experts” who drafted the propaganda on SARS-CoV-2 origins. The emails suggest there was a coordinated effort to manipulate the public on the origins of SARS-CoV-2 using deceptive planning, authoritative consensus, bullying and censorship. Read more analysis at The EpochTimes.