It is terrible, because Democratic Party run states totally listened to Donald Trump and followed his agenda, right? 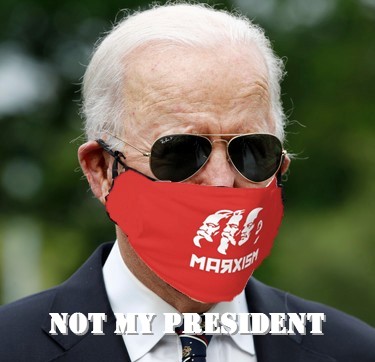 While July Fourth is the holiday that most directly celebrates Americans’ common heritage, this year it comes as their extreme divides underscore how difficult it has become for any president to set a unified direction for the country.

From vaccination rates to voting rights, from immigration policy to racial equity, blue and red states are hurtling in antithetical directions at staggering speed, even amid President Joe Biden’s persistent calls for greater national unity and his attempts to foster more bipartisan agreement in Washington. Across all of these issues, and more, Republican-controlled states are pursuing policies that amount to a wholesale effort to counter Biden’s direction at the national level — even as they look to block some of his key initiatives with lawsuits.

Seriously, where is Joe being bipartisan? The so-called bi-partisan infrastructure deal barely involved the White House, and, remember, Joe went off the reservation and yammered about forcing all the left wing garbage back into it immediately after a press conference with Republican and Democrat senators. Other than Joe’s apparent love of ice cream, what is he pushing that is bipartisan? Is it the amnesty for illegals? Opening the borders? Destroying the military with sweeps for right wing “extremists”, allowing the gender confused, teaching critical race theory, focusing the mission on ‘climate change’, etc? Nominating left wing extremists for executive office positions? Insert your own

In some ways, the red state recoil from Biden’s agenda echoes the “resistance” that exploded in Democratic-controlled states to Donald Trump’s tumultuous presidency; in other ways, today’s actions in red states may constitute even greater evidence of the country pulling apart. Especially striking is that, as during last year’s lockdowns and mask mandates, the separation between red and blue America is occurring not only at the level of government policy, but also in individual behavior, with all studies showing Republicans are being vaccinated against the coronavirus at a much lower rate than Democrats.

See, blue states did this during Trump, but, it’s totally worse now. They don’t really say how, probably because it’s super mean to oppose Biden’s extremist agenda which he says is bipartisan. And, yeah, most Republican states avoided the authoritarianism of the COVID lockdowns.

Taken together, these centrifugal pressures call into question not only the ability of any president to unify the nation, but also his or her ability even to chart a common course for more than roughly half of the country — either red or blue America. This divergence, across a wide range of issues and personal choices, is rooted in the continuing political re-sorting that has divided the parties more sharply than ever along demographic and geographic lines and produced two political coalitions holding inimical views on the fundamental social and economic changes remaking America. And that destabilizing process shows no signs of slowing, much less reversing, even after Trump — who fomented division as a central component of his political strategy — has left the White House.

I distinctly remember CNN opposing everything Donald Trump. And George W. Bush. But, when Dementia Joe is in office (or Barack Obama), Republicans are suddenly supposed to follow the agenda.

“One of the most important reasons why Democrats and Republicans intensely dislike each other is that they intensely disagree on a wide range of issues including the size and scope of the welfare state, abortion, gay and transgender rights, race relations, climate change, gun control and immigration,” Abramowitz writes. “As long as the parties remain on the opposite sides of almost all of the major issues facing the country, feelings of mistrust and animosity are unlikely to diminish even if Donald Trump ceases to play a major role in the political process.”

Well, yeah. Let’s also not forget that a good chunk of Democrats loathe the United States and all her symbols. They want to change everything about the nation, rather than simply leaving. How is there possible agreement? Skipping to the end

The Declaration of Independence that Americans celebrated over the weekend begins with the confident assertion that it is “The unanimous Declaration of the thirteen united States of America.” Today, it is unclear what set of principles, if any, America’s fractious 50 states might agree on across the widening red-blue divide.

Not to get all Political Theory, but, there was a reason why the federal government was simply supposed to be a unifying government on very, very specific issues, like national defense, immigration, monetary policy, and cross border economics: every state was different, every state had different concerns, and every state was pretty much the size of the old European nations, each of which had their own concerns. It’s why there is a 10th Amendment. Why senators were appointed by state general assemblies, to specifically do the business of the states, not the people nor the national parties. The notion of a national split is moving from a conspiracy theory to reality.