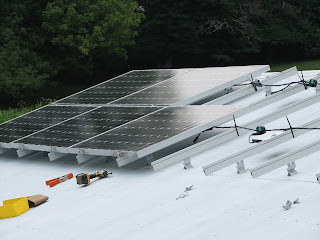 I just realized that during the time I was banned from making posts on the blogsite I had installed an on grid solar system and I had never written about it. So here it goes, I’ll tell you why I made the choices I did and what I have received in return.

To begin with you have basically two immediate choices to make. On-Grid System which works to feed back any extra current you make to use later or be paid for by your local power company. Now you have two choices to make here also, whether to outright purchase the system or to lease it from a company such as Solar City. The leased system mainly gives you a big discounted rate on electric use, but the monetary benefits from government rebates and sales of SRECS (solar renewable energy certificates) goes back into the pocket of the leasing company. With an owned system you get to reap ALL the benefits. The next choice is an off-grid system (meaning free from any grid system tie in. The way this works is for the panels to supply dc voltage by way of a battery bank to be stored in the batteries then redistributed through a larger inverter to be turned into AC current and sent through the house. This type of system is usually cost prohibitive and should probably only be considered if you have no electric to your homestead.

Now the sales of SRECS is a floating market and normally handled by your installer that follows the market closely and makes a trade when it’s most advantageous for you and them because they get an administrative fee on that sale. Sometimes it’s multiple times a year and sometimes it’s just once. My checks have varied from $40 to over $200 depending on the market price during the time of sale.

Now on to the meat and potatoes part. The system is comprised of 23 solar panels with micro invertors underneath each panel, the reason for that is because if one panel is partially shaded it won’t cut down the production on the other panels in the array. Lucky for me the roof of my garage faces directly south which is the absolute best orientation for panels.

If you are considering a roof mounted system it’s wise to consider the roof surface and its condition before you have an installation. My roof is old corrugated steel but has always been maintained with coatings. The coating on the roof now is white elastomeric coating made by Kool Coat and it works extremely well. If you are considering the system over an asphalt shingle roof I would think about the age of your roof vs. the expected lifetime of the solar system. In other words if your asphalt is between 15-20 years old I’d plan on replacing it before the system install. 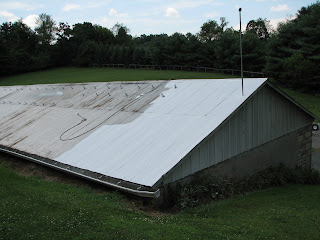 Now the month of the year is very important to the electric production because of course of available light hours and solar orientation (sun angle is lower in the sky during autumn and winter months. As a result historically June is my highest month of electric production, and December is the worst.

Because the micro inverters are mounted directly underneath the panels the resulting power coming out of the inverter is now AC power and very high voltage! 247 volts on my system.

My system was installed by the company that handled the sale but a certified electrician with solar experience has to handle the final hookup and electrical inspection from your local county inspectors.

Now on to the bad. A company called Paradise Energy Solutions did the install and everything went well until the last 3 years. They marketed the install based on products sold by the most popular supplier Enphase Energy Systems. Now they supplied the products used in the install and they also supply a monitoring system call Envoy which is an Ethernet based system that reports your system’s efficiency back to them but as I found out later the web based monitor that I can view wasn’t as detail oriented as I thought. They expected me to monitor my own system for efficiency and to make sure each panel was working correctly, but the individual panel/inverter output couldn’t be monitored online. As a result my output suffered immensely 2 ½ years ago because 7 inverters had failed. After much back and forth I downloaded the cell phone app and finally I can now see each panel’s production. 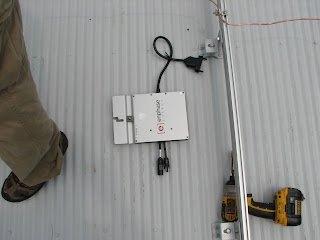 Paradise is paid by Enphase to do the inverter replacement (they are warranted for 25 years) but Enphase only pays them $125 labor per invertor. Because Paradise is in Lancaster PA and I am about 15 miles from Baltimore City they charge me and additional amount for travel time. It’s kind of like balance billing from a doctor when the insurance doesn’t cover the full amount they want. I don’t agree with this policy especially when the failures happen so often!

Thankfully the roof of my garage is low to the ground offering me walk on access so now I replace the inverters myself when they go bad.

Now for the good. The last 7 years when the system is working 100% I pay nothing for electric. BGE charges me $8.32 a month as an energy transmission fee. The system had paid for itself in 5 years and now I’m reaping the benefits for years to come with no outlay. 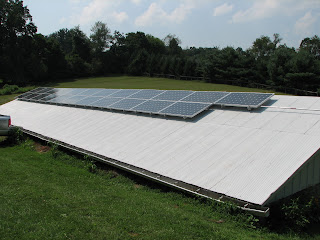 Is it worth it? Without a doubt yes but I pray they get their inverter problem straightened out.