Send us news tips! Get Pure, Uncensored News at BadBlue.com.Nation 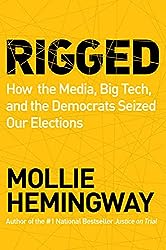 Rigged, by Mollie Hemingway: Find Out What Happened In 2020

Almost everything Pelosi is saying about Biden’s BBB agenda is a lie: Brad Polumbo
Varney: Build Back Broke Is The ‘Most Dishonest Spending Bill In American History’: WZ
Kyle Rittenhouse Violated the Safari Principle: CTH

Unrequited rage: The demand for mob justice in the Rittenhouse trial: Turley
Prosecutors Unseal Indictment Alleging Successful Iranian Hack During 2020 Election: HE
Teachers in California have been targeting students for recruitment into LGBTQ clubs: NTB


QOTD: “Antifa could not exist as an organization; capable to organize and carry out violent attacks against their targets; without the full support of the FBI. If the FBI wanted to arrest members of Antifa, who are actually conducting violence, they could do it easily – with little effort. It is the absence of any action by the FBI toward Antifa, that tells us the FBI is enabling that violent extremist behavior to continue. Once you accept that transparent point of truth; then, you realize the FBI definition of domestic violent extremism is something else entirely.” –Sundance