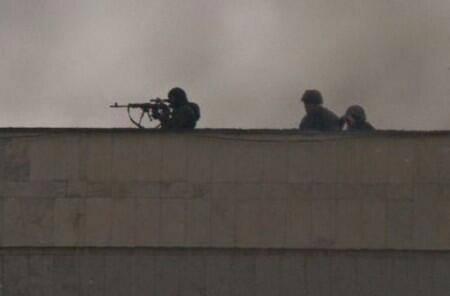 Photographed by journalists from Voice of Ukraine, we formerly witnessed pro-Russian forces firing upon unarmed protesters.The pro-Yanukovich forces are pictured above on a rooftop of a Ukrainian house on January 22, 2014, firing upon unarmed protesters.  According to Ukrainian journalists, working for the Voice of Ukraine, this is very common occurrence in which untold numbers of protesters are being murdered on a daily basis.

Communist revolutions, more accurately, George Soros led revolutions consistently use the snipers on the roof phenomena to overthrow existing regimes. This article will briefly review Soros use of this tactic in several successful regime change efforts in recent years. There are clear signs that the United States is about to fall victim to the same strategy. ANTIFA AND BLM RIOTS ARE ONLY THE FIRST STEP OF THE PROCESS! LIKE KOSOVO AND CAIRO, RIOTS WILL SOON BE REPLACED BY SNIPERS ON THE ROOF!

It wasn’t just the leaders of protesters that were targeted by snipers on the roof in Ukraine, that I covered in 2014,  it was also the pro-Russian friendly leaders in Ukraine’s government. The snipers on the roof phenomenon became the leading reason that the Russian-controlled Ukrainian government fell. It is why Ukraine fell from Russia to being a puppet of the CIA deep state. This was a CIA operation but it involved mercenaries provided by George Soros and these assassins, California based were likely under the control of former California governor, Jerry Brown (see Paul Preston). The purpose of the move to antagonize Russia because a more western-friendly regime would replace the pro-Putin government. Soros, undoubtedly had the goal of sewing the seeds of World War III. The CIA’s interest was based upon lessening the hold that the Russians had over our western allies in NATO when it came to natural gas of which Ukraine was a major supplier. Snipers on the roof was a central strategy in this successful coup attempt. However, Ukraine was not the only country to experience this strategy in recent years and the central player is always George Soros. Today, Putin is preparing to undue the damage to the Russian economy by invading Ukraine.

During the Arab Spring, in Egypt, government forces were displaying their favorite tactic in dealing with an unhappy citizenry. During the George Soros led Arab Spring in 2011, they utilized snipers on the roof to eliminate pro-Mubarak leaders. The toll became staggering as the body count rose dramatically with passing day. Americans should take note of this historic event because George Soros was behind the executions. Yes, George Soros who founded Antifa. More on this connection later in the article.

The Syrian civil war was known for its extreme brutality and mindless oppression. Routinely snipers on the roof, Syrian style, were used to execute opposition members as they emerged from home and work,  Internationally, Syria became known for placing snipers on the roof and singling out protest leaders, or opposition leaders and then executing them as they walked down the street. As the former Secretary of State, and as the CSS previously noted several times, Hillary Clinton created the destitute conditions in Venezuela with foreign policy changes. The desperate condtions led to the snipers on the roof phenomena as oppostion leaders took to the street. I have maintained for years that Venezuela was a beta test for what was coming to America!

News emanating from Venezuelan protesters is consistently revealing that government forces in Venezuela are summarily executing its citizens from motorcycles. Authorities are also breaking down doors of apartment buildings and murdering “suspected” protesters. As a result, protesters are being murdered by the Venezuelan government without trial. Some citizens, who are luckier than most are simply being arrested for “suspicion” of protest and hauled away without any due process of law. The American NDAA is the outgrowth of this philsophy emanating from the Obama adminstration! Previously, government opposition leader Leopoldo Lopez surrendered to governmental authorities. He was charged with inciting violence and opposition to the government. His arrest led to even more protesting. Venezuelan citizen, Gauber Venot, stated “It’s important we have foreign media here. Our media is censored; we learn about our own country from outside sources.”  So is ours Mr. Venot, so is ours. Of course, this is Venezuela and this could never happen in America. Perhaps one might want to revise this consideration in light of recently released American military documents. If and when the Democrats steal TOTAL  control of the government, they have the same tool to subjugate the masses and eliminate any opposition as the United States government has previously adopted the snipers on the roof strategy as a matter of domestic policy carried out by the US government. This, like so many other unconsitutional changes to government policy, was ushered in under the  Biden administration.

I think the public has a right to know how its government plans to handle future protests. Is America the new Venezuela, Egypt, or Ukraine?  A previously secret document which was leaked online; entitled FM 3-39.40 Internment and Resettlement Operations (PDF).