I Can Almost Excuse the Republican Support For Putin, But No! 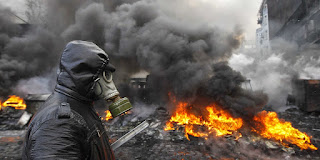 I get it I really do but no! The war that Putin waged against Ukraine wasn’t based on corruption, far be it from Putin to wage a war on corruption! His country is run by Oligarchs which have now basically turned on him, one has actually offered a million dollar bounty on his head dead or alive. They are feeling the pinch on their life savings.

Putin’s war was based in saving his so called Russian homeland supporters in the south western part of the Ukraine based on Nazism, and wanting to liberate them from Ukraine and making them autonomous from the country.

This has no other intent other than intimidation towards the general population, and then he attacks the declared evacuation route to fleeing Ukrainians into the closest countries to their east.

I see the Republican’s idea for support based on corruption for the Biden/ Pelosi/ Kerry, but it doesn’t excuse the humanitarian abuse of the people of Ukraine. If you wish to address that after the Russian aggression of the Ukraine, fine let’s do that but for right now let’s support them to support their own country and people!