Putin and His Ambitions of Grandeur 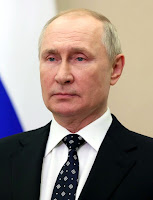 It has taken me a few days to digest and finally form an opinion about Russia’s recent aggression towards the Ukraine. Putin claimed he wasn’t going to attack the whole of Ukraine in the beginning just two sections mainly inhabited by Russian loyalists that were being “attacked” by what Putin said were Nazi sympathizers in the area.

This was the first thing that grabbed my interest, because back as far as the 14th century even into the Bolshevik Revolution Russia was heavily laden with a Jewish Population. Lenin himself was part Jewish and Stalin although not Jewish surrounded himself with Jewish minds of the time.

Although sentiment has favored the Jewish population in Russia for a long period, a certain amount of indifference has existed in the past two decades.

It struck me as odd that Putin would use this as an excuse to attack Ukraine to defend two small areas that have a Russian populace.

As time has progressed the Jewish population of the Ukraine has been mainly concentrated to the Eastern part of the country. After Putin’s initial attack it was clear to see his intent wasn’t to annex a small separatist movement in the Eastern portion but to claim the whole country as demonstrated by his wide spread attack on the entire country.

I believe that Putin sees his future as being the great reuniting force of what was once the great U.S.S.R. He wishes to bring as many of the satellite countries back as possible.

One only has to look at his past actions in Georgia and Crimea to see the scope of what he wishes to accomplish.

If Putin succeeds here does the world think he will stop at the Ukraine?

He has already threatened the World order over NATO, he doesn’t want the NATO nations to exceed further east to the border of his country a.k.a Ukraine. He’s already lost many countries that were once satellite countries of the U.S.S.R. to the NATO alliance.

Putin is playing a game of chicken with the world, and China is watching very carefully how this game is being played out.

On the other hand I think this shows the methodical patience that Putin has shown to try to return what he sees as the greatness of the once powerful U.S.S.R. One has to remember that Putin is only 69 years old, he’s been a major player in Russian politics for 20 years now, and frankly I don’t see him as going anywhere any time soon.

If Ukraine can’t be helped by the UN or be accepted into NATO then other countries must step up to protect it.

Remember this is how Hitler started, first he annexed Austria.

Read about the Crimea invasion here:

Read about the Jewish population of Ukraine here:

Read about the Georgia invasion here: