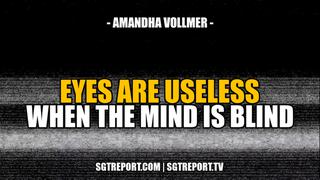 (Doctor) Amandha Vollmer joins SGT Report for the first time to discuss truth in a sea of lies. It’s very clear now that eyes are useless when the mind is blind; and the normies are completely blind to the truth about nearly EVERYTHING.

“VIRUSES” DO NOT EXIST as that is based off of GERM THEORY via SHILL Louis Pasteur propagated by JD ROCKEFELLER’s BIG PHARMA/PHARMAKIA/PHARMAKEIA: Witchcraft/Sorcery; further, there is NO sample of COVID that exists in the entire world, which the CDC and NIH admitted to. Moreover, there are no such thing as “germs,” the aforesaid “virus(es)”, their so-called “variants,” and “contagions,” that is all a mendacity or PSYOP pushed forth by JD Rockefeller’s BIG Pharma and shite Germ Theory peddled by his paid Shill Louis Pasteur who admitted on his death-bed and in his journals that he could not prove that ”viruses” exist nor that they were “contagious.” He further opined that “the microbe is nothing, the terrain is everything.” So, if one researches Virology, Epidemiology, Vaccinology, and Germ Theory via scholarly articles, peer-reviewed text/prose, scientific papers, and books, then one will learn the TRUTH. Further, “viruses” CANNOT jump from animals to humans, i.e., from one species to another species (Zoonotic) as they purport that “COVID” did from “Bats” or a “Pangolin.” And regarding so-called “vaccines. ALL VACCINES are SHITE, i.e., POISON; e.g., since Germ Weaponry/BIO-WEAPONS was made illegal by the Biological Weapons Convention or BWC or Biological and Toxin Weapons Convention, which is a disarmament treaty (agreement) that effectively bans biological and toxin weapons (vaccines) by prohibiting their development, production, acquisition, transfer, stockpiling, and usage, thus, the Euphemism, i.e., a paronomasia, “vaccine” was introduced; so, all “vaccines” are BIOLOGICAL Weapons via Gain of Function endeavoring and is why Fauci (NIAID/NIH) used China for the aforesaid reasons.