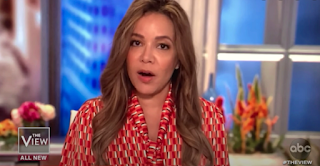 Once upon a time the daytime talk show “The View” allowed for a diversity of opinion. Elizabeth Hasselbeck provided an alternative to the hard left opinions of the other hosts, and it made the show watchable, and even entertaining. Then, Elizabeth went her own way, and since then the show has become an Orwellian Marxist gabfest that attacks anyone who dares to step off of the hard-line narrative established by America’s leftwing version of Pravda and the KGB, combined.

This morning the ABC show decided to really show who they really are when co-host Sunny Hostin referred to Black Republicans as an “oxymoron” commenting that she didn’t understand how any Blacks or Latinos could be members of the Republican Party.

Hostin’s comments were in connection with a story being discussed on the daytime program regarding a potential conflict of interest between newly tapped White House press secretary Karine Jean-Pierre and her lover, CNN reporter Suzanne Malveaux.

The View team decided the obvious conflict of interest is not a conflict of interest, but guest co-host Lindsey Granger did say it was necessary to be realistic “about what happens when you’re in bed with somebody,” and that people didn’t want to see situations where the media gives a politician an advantage.
Co-host Ana Navarro took issue with Granger’s observation, tying it with Granger’s past work with Donald J. Trump claiming the position Granger was taking was “a novel idea” for a supporter of the former president.
Granger quickly defended herself pulling the Black Monolith into view by declaring she didn’t agree with everything Trump did and that she was “a Black woman first.”

Hostin, largely because she has shown she thinks being republican is a vile thing, asked, “Are you a Republican?” Granger confirmed she was.

“I feel like it’s an oxymoron, a Black Republican,” Hostin said, interrupting her.

“Why? Your friend right here is a Republican,” Granger shot back, referring to Ana Navarro, who, while she claims to identify as a Republican, acts, votes and supports candidates that reveals she is actually a die-hard Democrat Party supporter.  In fact, she worked for Joe Biden’s 2020 campaign.

Hostin’s previous admittance to being a Catholic and disagreeing with abortion was also brought up by Granger in the “you are all a bunch of hypocrites” challenge, pointing to the obvious hypocrisy that Hostin is also advocating for abortion to be legal.

“I don’t understand either of you,” Hostin said, again interrupting Granger.

“No you don’t understand yourself then,” Granger retorted.

“Today this is not about me and it’s not about you. It’s about celebrating Karine Jean-Pierre,” Navarro chimed in before co-host Joy Behar ended the segment.

What is happening is that they’ve been lying for so long, to themselves as well, that now they are confused because they instincts that are tied to natural law, their claim their not racist but the way to stop racism is with racism against anyone who disagrees with them politically or socially, and their hard left narrative, can’t seem to find any common ground, and it is confusing to them, to say the least…not that they will admit to any of that.
– Political Pistachio Conservative News and Commentary