Click here to read the first part of this article

While most Christians would claim that they have a biblical worldview, I suspect that many of them could not (1) explain what a worldview is or (2) what the particulars of a biblical worldview are beyond personal salvation, keeping some of God’s commandments, and working to raise children in a Christian home. These, of course, are good worldview starting points. But they are not enough. A biblical worldview must be comprehensive to include all of life in the particulars. For example, the Eighth Commandment states unequivocally, “You shall not steal” (Ex. 20:15). That’s clear enough. What’s true and applicational for individuals must also be true and applicational for civil governments.

It’s not always easy to apply biblical laws to the modern era. But as we are seeing, the word of the day is “confusion.” We’ve entered a new Babel era because there is no longer a fixed moral pou sto, a firm foundation to stand to make moral decisions. Many are so confused that they believe that “gender” is fluid, and that someone like Ellen Page can become “Elliot Page” by self-affirmation and sexual mutilation. This headline says it all: “Ellen Page Shows Off Her Mutilated Body, and the Media Celebrates.” It’s a confusion born of rebellion.

Millions of Christians, sadly, have not recognized the continuing authority of God’s law or its many applications to modern society. They have thereby reaped the whirlwind of cultural and intellectual impotence. They implicitly denied the power of the death and resurrection of Christ. They have served as footstools for the enemies of God. But humanism’s free ride is coming to an end. This book serves as an introduction to this woefully neglected topic.

For too long Christians have rejected God’s Law-Word in the particulars and as a result, the world has followed with disastrous results.

Without a fixed moral standard in the particulars, we end up with multiple ethical outcomes by those who are in power based on what Thomas Sowell describes as “the vision of the anointed.” With a two-kingdoms approach to worldview thinking, there can be one law for the wolf and another law for the lamb, and who is to say otherwise?[1] In terms of biblical particulars, “You shall not pervert justice; you shall not show partiality, nor take a bribe, for a bribe blinds the eyes of the wise and twists the words of the righteous. You shall follow what is altogether just, that you may live and inherit the land which the Lord your God is giving you” (Deut. 16:19–20; see James 2:9). But by what standard does anyone know when justice is perverted or even how to determine what’s just or how justice can exist in a materialistic world?

Francis Schaeffer’s How Should We Then Live?

There is no doubt that Francis A. Schaeffer (1912–1984) broadened the appeal of the Reformed faith with his popular writing style and activist worldview. Schaeffer’s popularity was extensive enough that he was recognized by the secular media as the “Guru of Fundamentalism,”[2] but his worldview was nurtured in the soil of world-and-life-view Calvinism. Schaeffer filled the intellectual gap that resided in much of fundamentalism. In a sense, he carried on the tradition of his early mentor, J. Gresham Machen (1881–1937).

Prior to 1968, little was known of Francis Schaeffer. He had isolated himself from American evangelicalism by ministering to the roaming discards of society who were trekking through Europe hoping to find answers to life’s most perplexing problems. The publication of The God Who Is There and Escape from Reason introduced him to an American evangelicalism in crisis. Schaeffer had an impact where many Christian scholars had made only a few inroads into the hearts and minds of Christians. What did Schaeffer do that was different? Certainly, Carl F. H. Henry’s The Uneasy Conscience of Modern Fundamentalism[3] made an impact. It was, however, more of a statement than a system of belief with worked-out implications. Schaeffer worked at integration. His desire was to be more than just a critic of culture.

Schaeffer saw extended implications to the worldview he put in motion in his early works. He expanded the areas over which He believed Jesus is Lord with the publication of How Should We Then Live? and Whatever Happened to the Human Race? “That led to the demand of the next logical step: What are the Christian’s relationship to government, law, and civil disobedience?”[4]

Schaeffer rightly decried a de facto sociological law — “law based only on what the majority of society thinks is in its best interests at a given moment” — but offered no worked-out worldview to counter and replace it. He wrote about a “Christian consensus” and how that consensus is found in the Bible and spills over to the broader culture. This is best demonstrated in his repeated references to Paul Robert’s painting Justice Lifts the Nations instructing the judges.

Down in the foreground of the large mural the artist depicts many sorts of litigation — the wife against the husband, the architect against the builder, and so on. How are the judges going to Judge between them? This is the way we judge in a Reformation country, says Paul Robert. He has portrayed Justice pointing with her sword to a book upon which are the words, “The Law of God.” For Reformation man there was a basis for law. Modern man has not only thrown away Christian theology; he has thrown away the possibility of what our forefathers had as a basis for morality and law.[5] 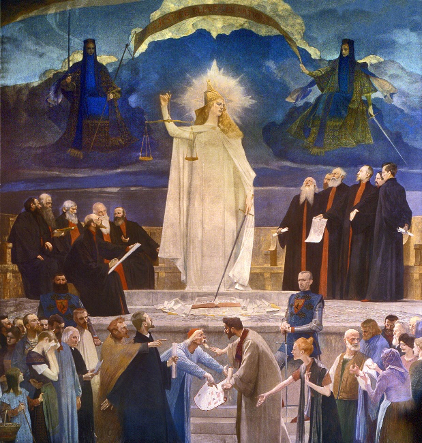 This emphasis on the law continued to play a part in Schaeffer’s worldview theology. “In Reformation countries,” Schaeffer wrote, “the Old Testament civil law has been the basis of our civil law.” Of course, he quickly reminded his readers that “we are not a theocracy, it is true; nevertheless, when Reformation Christianity provided the consensus, men naturally looked back to the civil law that God gave Israel, not to carry it out in every detail, but to see it as a pattern and a base.”[6] Schaeffer saw the book of Joshua as “a link between the Pentateuch (the writings of Moses) and the rest of Scripture. It is crucial for understanding the unity the Pentateuch has with all that follows it, including the New Testament.”[7]

Long before the above writers outlined a comprehensive biblical worldview, Archibald Alexander Hodge stated the same position. Hodge, the son of Charles Hodge (1797–1878), the great systematic theologian, Bible commentator,[8] and engager of culture,[9] served as Professor of Systematic Theology at Princeton Seminary from 1877 until his death in 1886. The younger Hodge made the case that “the kingdom of God on earth is not confined to the mere ecclesiastical sphere, but aims at absolute universality, and extends its supreme reign over every department of human life.”[10] The implications of such a methodology are obvious: “It follows that it is the duty of every loyal subject to endeavour to bring all human society, social and political, as well as ecclesiastical, into obedience to its law of righteousness.”[11]

In addition, he had no problem teaching that there are political implications to the preaching and application of the gospel. Consider the following:

It is our duty, as far as lies in our power, immediately to organize human society and all its institutions and organs upon a distinctively Christian basis. Indifference or impartiality here between the law of the kingdom and the law of the world, or of its prince, the devil, is utter treason to the King of Righteousness. The Bible, the great statute‑book of the kingdom, explicitly lays down principles which, when candidly applied, will regulate the action of every human being in all relations. There can be no compromise. The King said, with regard to all descriptions of moral agents in all spheres of activity, “He that is not with me is against me.” If the national life in general is organized upon non‑Christian principles, the churches which are embraced within the universal assimilating power of that nation will not long be able to preserve their integrity.[12]

Hodge’s last point is important. The belief that somehow “non-Christian principles” will serve the world and church well is naïve in the extreme. Of course, if you believe it’s inevitable that the Church is to be overwhelmed by the forces of evil in the end, then the two-kingdoms approach to life is viable and necessary. We should welcome it and embrace the darkness to come, but this would not be the world-and-life-view I was taught and learned by my own reading as a young student at Reformed Theological Seminary in the 1970s.

Worldview 101: A Biblical View of the World

Utilizing audio, video, and printed material, Worldview 101 will equip the student with the tools necessary to ‘think God’s thoughts’ about the world and the created order. It will reveal and re-direct the humanistic thought patterns that exist in each of us. The Enlightenment promised freedom, but brought slavery to man’s ideas instead. Worldview 101 points the way forward to true freedom of thought in Christ.