By Jim Quinn / The Burning Platform

The phrase “fiddling while Rome burns” is an intriguing idiom, referencing the great fire which ravaged Rome for six days in 64 A.D. and the legend that Nero, one of the most sadistic, decadent, and cruel rulers of all-time, instead of taking action to stop the fire, played his lyre while composing a song about Rome’s destruction. The Roman historian Tacitus wrote that Nero was rumored to have sung about the destruction of Rome while watching the city burn but it’s likely this was just a myth.

The fire destroyed seventy percent of the city and left half the population homeless. There are those who believe Nero set the fire on purpose, especially after he used land cleared by the fire to build his Golden Palace and its surrounding pleasure gardens. Being a soulless autocrat at heart, Nero did what all feckless politicians do, he blamed the Christians (an obscure religious sect at the time) for the fire and had many arrested and executed. 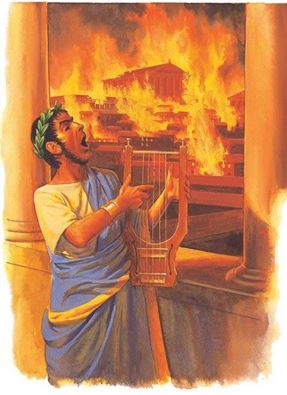 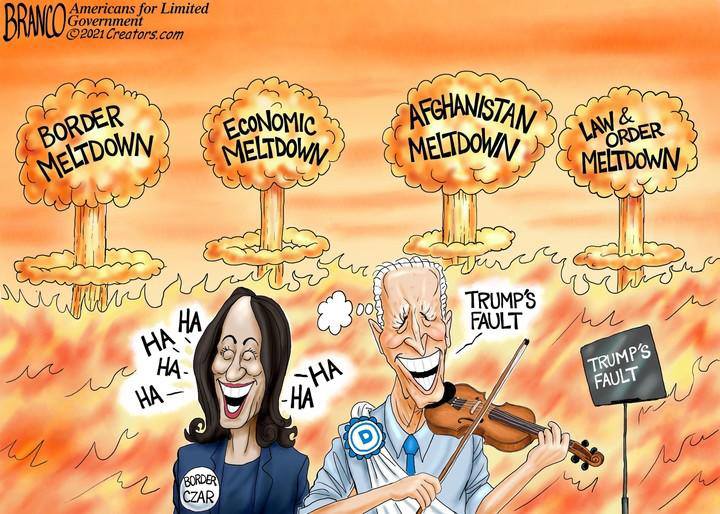 Whether this story is true or just a parable, the messages are pertinent throughout history, and never more so than now. Occupying one’s time doing inconsequential things while a catastrophic event is underway is the ultimate in leadership failure. Focusing on trivial matters while your people are suffering during a time of crisis is the mark of an ineffectual irresponsible leader or one whose true purpose is to burn down society so it can be “built back better” in the form of a communist totalitarian state ruled by a globalist elite cabal.

One cannot ignore the parallels to our American empire in flames as Biden, the hordes of hyena politicians in Washington DC, their captured corporate propaganda media mouthpieces, central banker fiat printing enablers, and the Davos billionaire cadre are attempting a controlled burn of our world, but it has become a conflagration destined to rage out of control and consume the planet in flames.

We are most certainly living in a time of crisis, as this Fourth Turning hastens towards our rendezvous with destiny. Not only is the American empire burning in an abstract sense, but once the ANTIFA, BLM and pro-abortion terrorist groups (all funded by Soros and Gates) hit the streets, the country is literally burning. The chaos, havoc, violence, and vitriol are all being engineered by the puppeteers/invisible government who control the minds of the masses through media manipulation, non-stop propaganda, technological deceit, and social indoctrination through government schooling. It was succinctly described by Edward Bernays nearly a century ago and has been perfected by those in governing the world today.

“The conscious and intelligent manipulation of the organized habits and opinions of the masses is an important element in democratic society. Those who manipulate this unseen mechanism of society constitute an invisible government which is the true ruling power of our country. We are governed, our minds are molded, our tastes formed, our ideas suggested, largely by men we have never heard of. This is a logical result of the way in which our democratic society is organized. Vast numbers of human beings must cooperate in this manner if they are to live together as a smoothly functioning society. In almost every act of our daily lives, whether in the sphere of politics or business, in our social conduct or our ethical thinking, we are dominated by the relatively small number of persons who understand the mental processes and social patterns of the masses. It is they who pull the wires which control the public mind.” – Edward Bernays – Propaganda (1928) pp. 9–10 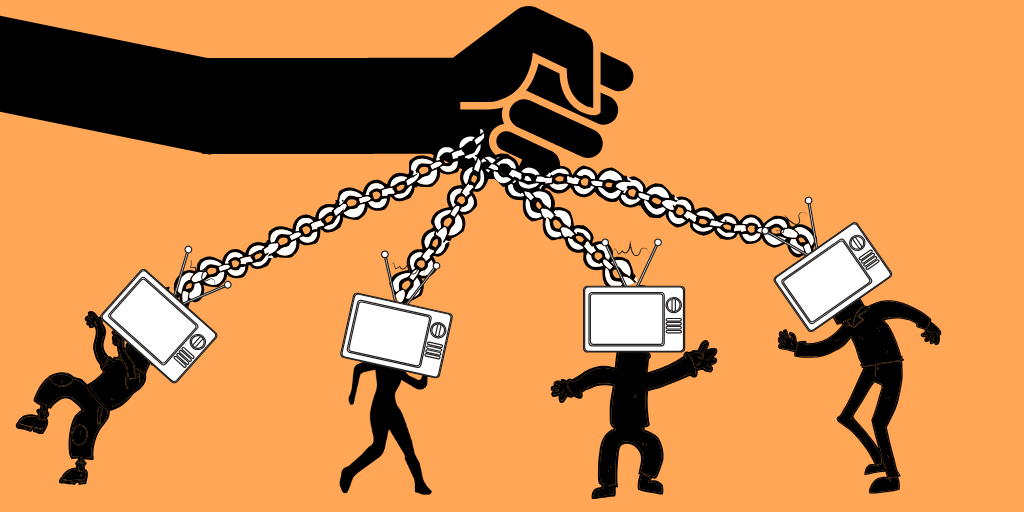 I wonder if the people of Rome were as baffled by their emperor’s total disregard for their well-being and safety as their city burned to the ground as the minority of critical thinking Americans are today watching Biden, his Obama handlers, and their toadies in congress systematically burn our once great republic to the ground. There is no doubt Biden is an incompetent, low IQ, hapless, dementia ridden, racist, pedophile, but what is happening in this country and across the globe is not due to incompetence, but a purposeful destruction of all productive structures, small businesses, Constitutional rights, and societal norms, in order to implement a totalitarian techno-gulag across the world run by a global elite of billionaires and their evil apparatchiks.

A crucial aspect of this New World Order is a massive depopulation of the planet to the desired number of serfs needed to do the slave labor necessary to keep the overlords in luxury and splendor. Private jets, yachts and fenced luxurious 25 bathroom mansions with private armed security for them. The serfs will own nothing, eat bugs, and be happy, or be swiftly terminated, since guns will have been outlawed. Our nation is beset by traitors within. 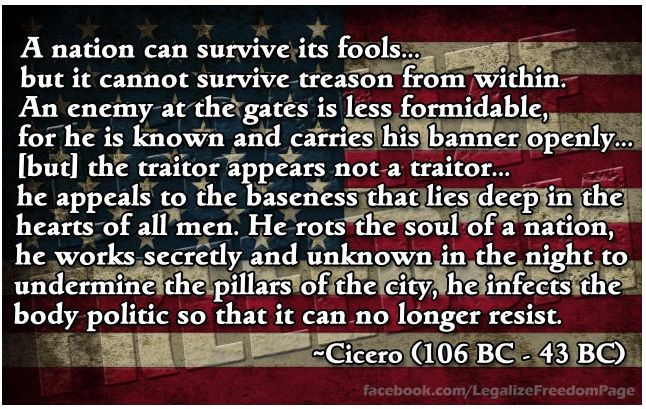 The pockets of firestorms swirling out of control across the world, purposely ignited by those running the show, makes it difficult to distinguish between fires detonated as distractions and the real inferno destined to reduce the world to ashes. Everything roiling the world over the last twenty-seven months has been initiated and/or utilized by the ruling oligarchs to implement their master plan of “building back better” after they burn the world to the ground. Even the distractions are designed to further their agenda. The latest distraction being the Supreme Court ruling on abortion.

The lunatic left is rioting and protesting in left wing cities where they can murder an unborn child any time they want, while woke corporations’ virtue signal, and insane females have mental breakdowns on Tik Tok. It gives the left-wing media something to scream about other than the January 6 “insurrection” hearings that no one watched. Pride month is nothing but a giant distraction, where drag queens, teachers grooming children, and transgender bullshit are jammed down our throats while corporations attempt to capitalize on the worship of abnormality to increase their profits. The government has achieved the goal put forth by William Casey in 1981.

The January 6 joke of an “armed insurrection” without arms, led by Buffalo guy and initiated by FBI plants (Ray Epps) and ANTIFA infiltrators, is another engineered distraction, with the current fake news hearings revealing much ado about nothing, and all designed to cover-up the traitorous coup conducted against Trump by the Deep State players in the Oval Office (Obama), FBI, NSA, DOJ, CIA, DOD, and the wicked witch herself – Hillary Clinton. The Washington establishment (One Party) initiated another distraction last week under the guise of protecting the children, with another un-Constitutional gun grabber law which will be overturned by the Supreme Court.

Red flag laws have already been deemed un-Constitutional by the Supreme Court, but that didn’t stop Pelosi, Schumer, and a bunch of traitorous Republican senators from virtue signaling with a new law. Until it is overturned, it will be used to take away the guns of anyone not toeing the government line. Just like Biden’s un-Constitutional demand that all employers mandate the poisonous gene altering jabs, knowing it was un-Constitutional, ignoring and tearing the Constitution to shreds is the goal. Biden’s previous ruse worked, as tens of thousands of employers mandated the jab before it was deemed illegal. 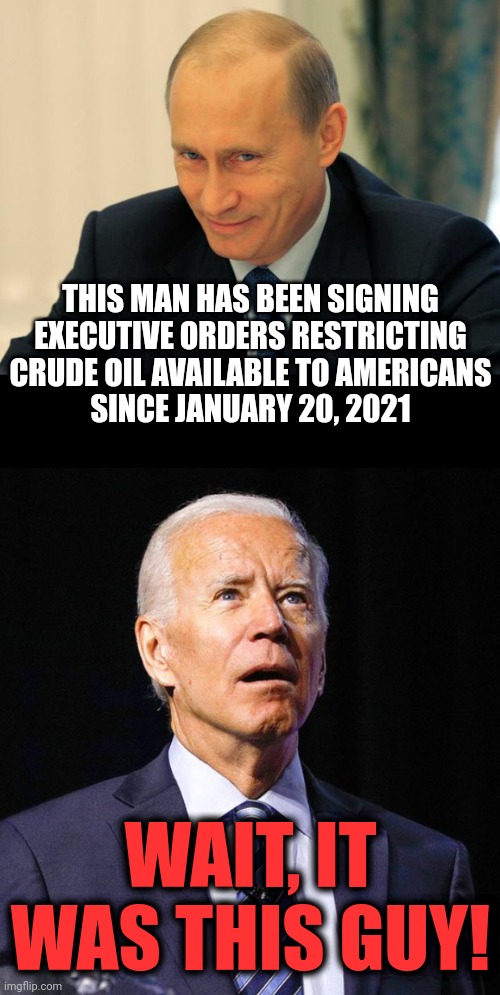 Just as Nero blamed the Christians for the disaster he created, Biden blames Putin, Trump, oil companies, the un-vaxxed, lawful gun owners, and the 70 million voters who still consider him an illegitimate president, for the ten-alarm fire engulfing the economy, stock market, and a society he continues to debase with far-left policies. At the current trajectory Biden may go down in history as infamous as Nero, with his fatally reckless actions trying to initiate World War 3 with Russia.

He and his NATO cronies have been outmaneuvered, outwitted, and embarrassed by Vladimir Putin regarding the Ukraine conflict, which they provoked and have continued to exacerbate with economic sanctions and attempting to incite Putin into a greater conflict. It has all blown up in Biden’s face, as his sanctions haven’t hurt Russia, but have certainly destroyed the finances of average Americans. The ruble is at a seven year high versus the USD, Russia’s oil revenues are soaring, Biden’s approval ratings are lower than whale shit, and the US and EU have entered a self-inflicted recession. 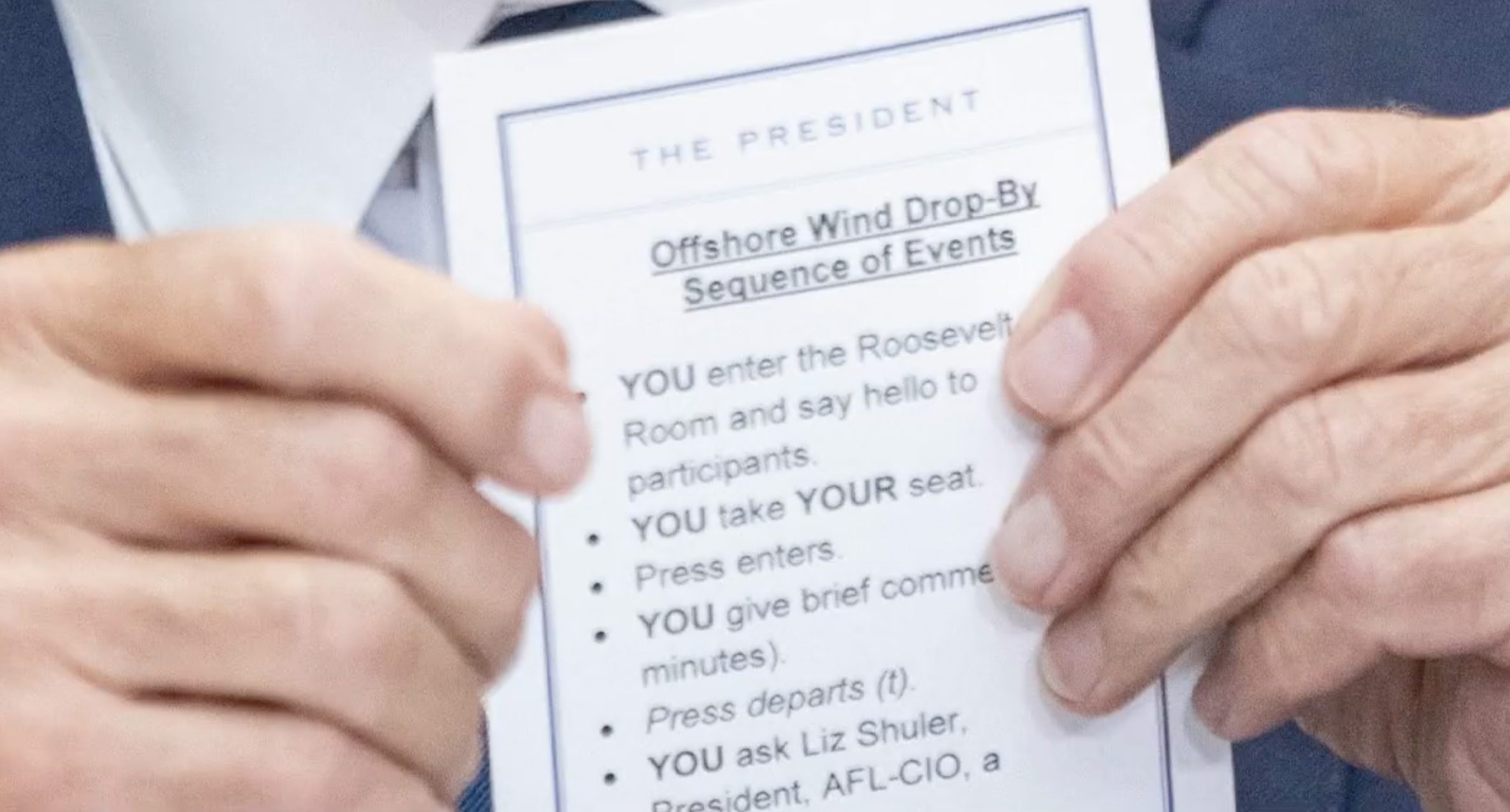 As Biden spends his days in a dementia haze, falling off bikes, crapping his pants, smelling little children, pumping green energy fantasies, honoring mentally damaged LGBTQ+ icons and pretending to be president, while his handlers orchestrate everything he does, says or thinks, the country accelerates towards economic implosion, global war, civil chaos, and hardship not experienced since the 1930s for the average American.

I keep being drawn back to the theory Nero purposely burned Rome to clear space for his Golden Palace and pleasure gardens. Essentially his build back better plan. Despite the non-stop parade of distracting events, narratives, and false flags, the big picture has come into focus for me. What even I would have considered conspiracy theory a year ago, now makes the most sense based upon the incoming facts and actions of the major players.

I believe the entire Covid scheme, and the mRNA concoctions were planned and coordinated by those constituting the “invisible government” as a slow-motion depopulation plot designed to reduce the global population to a number they believe can be managed and manipulated to maximize their wealth, power, and control. First, the Wuhan flu gave a final push to the old, infirm, and obese. The lockdowns drove others to commit suicide, die of Chinese fentanyl overdoses, or die from undiagnosed cancers and heart disease.

The most sadistic and insidious aspect of this depopulation conspiracy is the so-called vaccines, that don’t keep you from contracting, spreading, being hospitalized, or dying from Covid, pumped into the bodies of almost 5 billion people. Critical thinking doctors, not bought off by Big Pharma, warned over a year ago about the potential side effects, anti-body dependent enhancement (ADE) created by the vaccines, and dangers of myocarditis in young seemingly healthy people. They also warned about the potential impact on fertility. Most were banned from Twitter and Facebook for their views.

Even though the government, the CDC, FDA, Fauci, Pfizer, Moderna and their captured MSM mouthpieces continue to lie and obfuscate, the data continues to mount, unequivocally proving these genetic altering spike proteins are causing hundreds of thousands of seemingly healthy people to “die suddenly”. Young athletes are dying. Pregnant women are losing their babies. Life insurance companies are reporting deaths in young age brackets far exceeding what actuarial tables predict. And now studies are showing fertility rate declines in Germany that are 9 sigma events – virtually impossible.