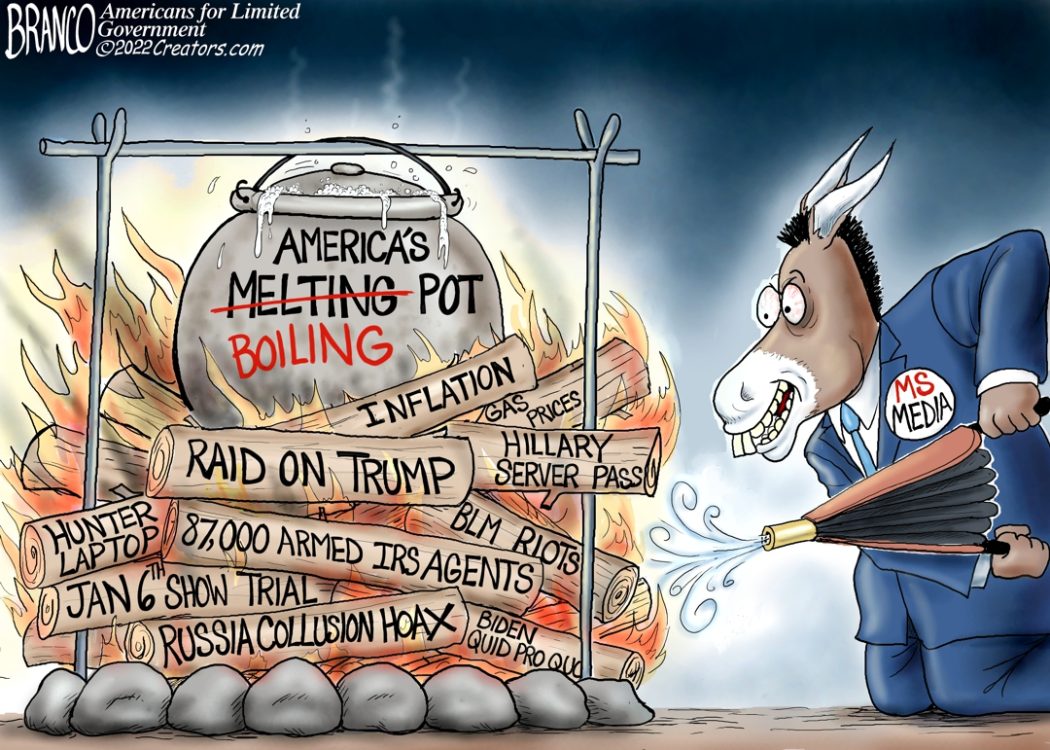 When Trump left office I wrote that he would be “hounded into oblivion.” It is happening precisely as I said. Not content with framing Trump with Russiagate, impeachgate, January 6 insurrection, his business practices, and other investigations in preparation, Trump is now being framed for withholding presidential documents from the National Archives.

The success that the Democrats and the presstitutes have had in defining as a crime any and every thing that disagrees with them, including thought crimes attributed to their opponents, has permitted the Democrats to lay the foundation for a coup. The Democrats, DOJ, and FBI, with the full support of the Presstitutes, have organized a Nazi-style Putsch. You are watching it daily on CNN. https://www.cnn.com/2022/08/15/politics/lindsey-graham-georgia-investigation/index.html

Not content to frame a Republican president, they are also going after Republican senators. An Obama-appointed Democrat federal district judge, Leigh Martin May, has ruled that US Senator Lindsey Graham, must appear before a county grand jury in Georgia that is investigating what the county Democrats and CNN are calling, contrary to all known evidence, “former President Donald Trump’s efforts to overturn the 2020 presidential election in Georgia.” Trump and his supporters wanted widely reported and documented electoral fraud investigated and corrections made where warranted. Trump could have overturned the election only if investigation proved the suspicions to be correct. By blocking the investigation, the Democrats admitted by implication that the election was stolen. If the election was not stolen, the Democrats had nothing to fear and had no need to split the country by labeling those suspicious of irregularities “domestic terrorists” who had to be denied a hearing and shut down. Clearly, the Democrats’ behavior indicate a guilty party hiding its crime.

Senator Graham as Chairman of the Senate Judiciary Committee made telephone calls to Georgia state officials about the appearances of electoral fraud in the state’s 2020 elections. The Democrat, Fani Willis, who is a Fulton County, Georgia, district attorney, said that Senator Graham “made reference to allegations of widespread voter fraud in the November 2020 election in Georgia, consistent with public statements made by known affiliates of the Trump Campaign.”

In other words, as Fulton County, Georgia, district attorney Fani Willis sees it, Senator Graham is guilty of asking questions about the integrity of the election. Federal judge May sees it the same way. In ruling that Graham does not have immunity from being subpoenaed by a county judge for activities pertaining to his federal legislative role, judge May ruled that Willis has shown “extraordinary circumstances and a special need for Senator Graham’s testimony on issues relating to alleged attempts to influence or disrupt the lawful administration of Georgia’s 2020 elections.”

This raises constitutional issues that will be debated to cover up what is really happening. Local district attorneys and federal courts have been politicized and weaponized and are going after Republican US senators.

To understand the orchestration under way, understand that the “alleged attempts” are a chimera. If the Georgia elections were honest as Democrats and the presstitutes allege, any attempts to illegally influence them and disrupt them had no effect. What is under investigation is not a crime but an allegation that Trump and his supporters had in mind a crime but failed to commit it. In other words, there is no body. What is being investigated is a supposition based on allegations by self-serving Democrats.

Republicans will not see their danger. They will put their trust in the rule of law and say law must run its course, and they will find they have no recourse.

In one of his western stories, Louis L’Amour describes the takeover of a town and surrounding ranches by a criminal enterprise: “At the crucial moment they lacked a leader. One was too opposed to violence, another was too law abiding, and the rest lacked resolution.” That is the Republican Party.