Here is an index to assist you in moving from section to section within the article.

A cold front will continue to push south of the area today. Behind the front, drier conditions and cooler temperatures will persist through the weekend ahead of a second cold front expected to cross the region at the beginning of next week.

Macon Media is being underwritten today by Franklin Office Supply. Visit their store at 161 Highlands Road in Franklin or check out their website.

Back to Top
Local Weather Sunny, with highs in the mid 70s. Calm winds.

Increasing clouds, with lows in the mid-to-upper 40s. Calm winds.

Mostly sunny, with highs in the upper 70s. Light and variable winds.

A 30 percent chance of showers before 11pm. Partly cloudy, with lows in the mid 50s.

Sunny, with highs in the mid-to-upper 60s. Winds out of the north around 5 mph in the morning decreasing to become calm in the afternoon.

Mostly clear, with lows in the mid 40s. Calm winds.

Sunny, with highs near 70. Calm winds in the morning increasing to come out of the southwest around 5 mph in the afternoon.

Partly cloudy, with lows in the lower 50s. Calm winds.

A chance of showers, with thunderstorms also possible after 1pm. Mostly sunny, with highs near 70. Chance of rain is 40%.

A 30 percent chance of showers before 10pm. Partly cloudy, with lows around 50.

Sunny, with highs in the mid 70s. Light and variable winds.

Increasing clouds, with lows in the upper 40s. Light winds out of the southeast.

Sunny, with highs in the mid-to-upper 70s. Light and variable winds.

A 30 percent chance of showers before 10pm. Partly cloudy, with lows in the mid 50s.

Sunny, with highs near 70. Calm winds.

Mostly clear, with lows in the mid-to-upper 40s. Calm winds.

Sunny, with highs in the low-to-mid 70s. Light winds out of the southwest.

A 40 percent chance of showers, mainly after 10am. Mostly sunny, with highs in the lower 70s.

A 30 percent chance of showers before midnight. Partly cloudy, with lows in the low-to-mid 50s.

Back to Top
Hazards and Tropical Weather

Hazardous weather is not expected fortoday or tonight, 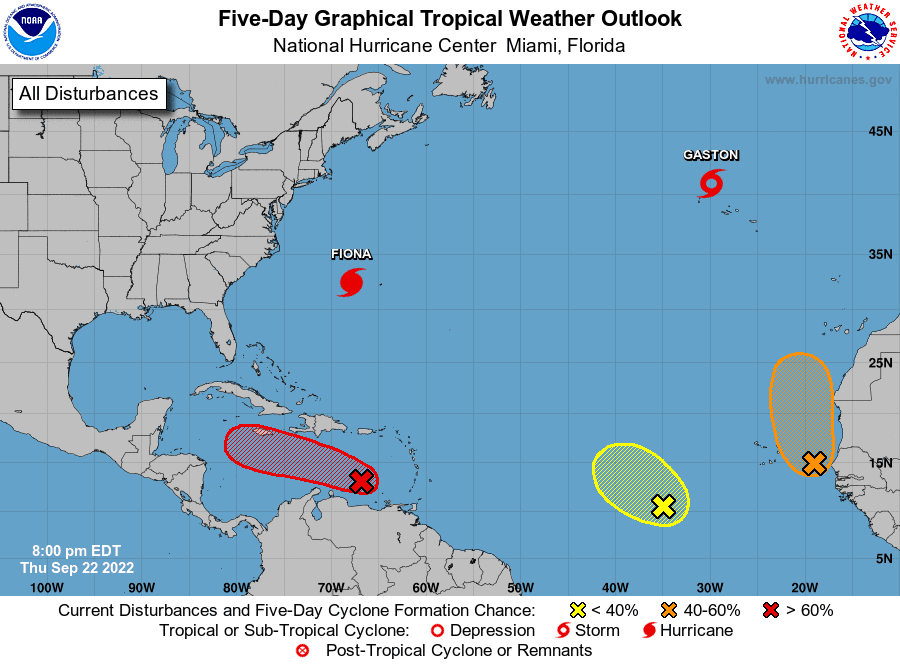 For the North Atlantic…Caribbean Sea and the Gulf of Mexico:

1. Central Caribbean Sea:
Satellite imagery indicates that showers and thunderstorms have increased and are showing signs of organization tonight with a well-defined low pressure system located over the central Caribbean Sea about 100 miles north-northeast of Curacao. Even though the upper-level wind environment is currently only marginally favorable, only a small additional increase in organization would result in the formation of a tropical depression later today. The system is expected to continue moving west-northwestward at 10 to 15 mph across the central and western Caribbean Sea. Locally heavy rainfall and gusty winds are likely to affect northwestern Venezuela, the ABC island chain, and northeastern Colombia through Friday. Interests in Jamaica, the Cayman Islands, and western Cuba should closely monitor the progress of this system.

2. Eastern Tropical Atlantic:
A broad area of low pressure, located roughly in between the Cabo Verde islands to the east and the west coast of Africa, is producing a large area of showers and thunderstorms. While this activity is gradually becoming better organized, earlier satellite wind data indicated the circulation remained fairly broad. Environmental conditions are forecast to be generally conducive for some development over the next day or so, and a tropical depression is likely to form by this weekend while the system moves northward at about 10 mph, parallel to the coast of west Africa.

3. Central Tropical Atlantic:
Shower and thunderstorm activity remains disorganized association with a broad area of low pressure located several hundred miles west-southwest of the Cabo Verde Islands. Despite marginal environmental conditions, some slow development of this system remains possible over the next several days while it drifts northwestward or northward over the central tropical Atlantic.

Tropical Tidbits is a website run by Macon Media’s favorite no-nonsense tropical forecaster, Levi Cowan. He does not post material just to get clicks or to sensationalize the storms he covers to “make them more exciting.” He is reliable and sober, unlike The Weather Channel crowd of Drama Queen Meteorologists.

Back to Top
Almanac 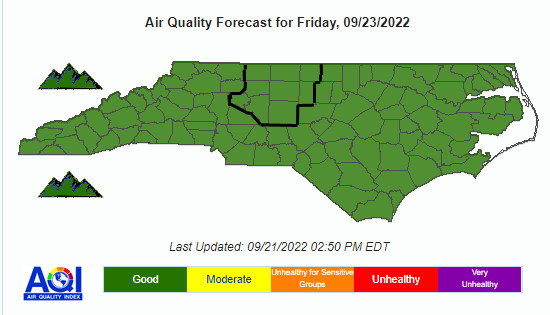 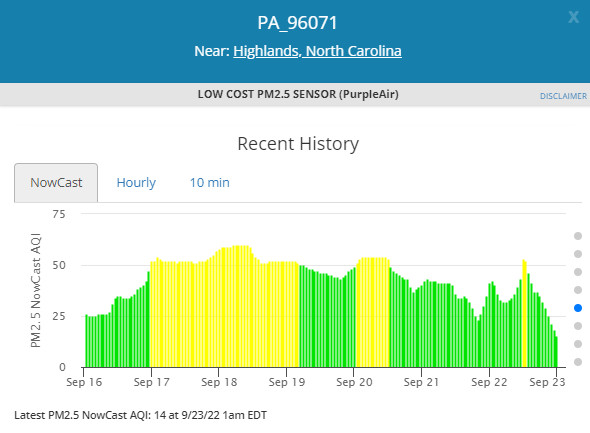 Back to Top
Macon Calendar
(send your event to [email protected])

• ‘A centerpiece for golf around the world.’ Gov. Roy Cooper talks Presidents Cup in Charlotte [Raleigh News and Observer] 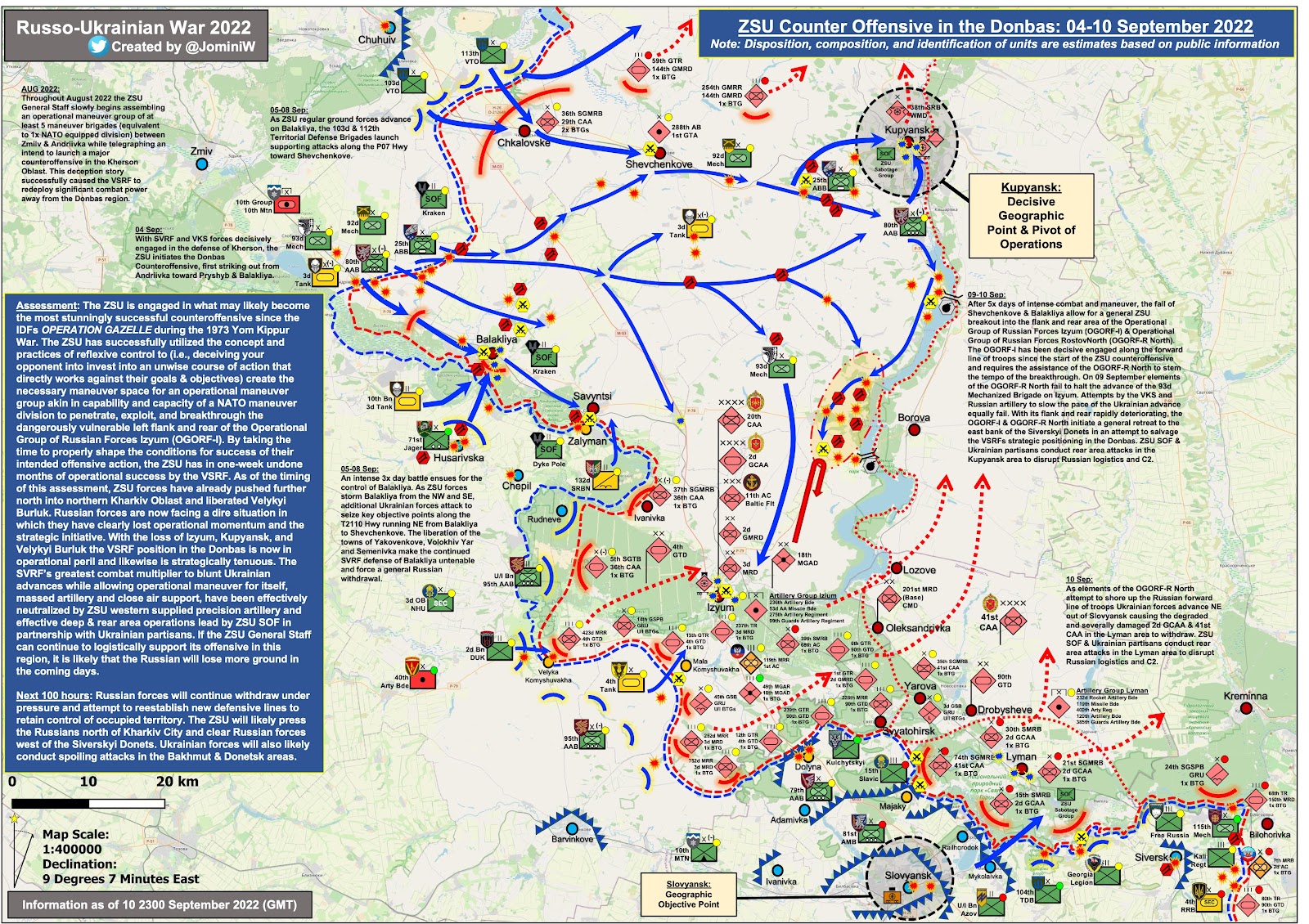 1/ UTW – Operational Update: ZSU Counter Offensive in the Donbas, 04-10 Sep. The ZSU is engaged in what may likely become the most stunningly successful counteroffensive since the IDFs OPERATION GAZELLE during the 1973 Yom Kippur War. #ukrainecounteroffensive #UkraineWillWin pic.twitter.com/nrC8cg02ia

• Iran to join drills with Russia and China [Russia Today]

• Lavrov at UN Security Council: It is you who turn a blind eye on Kyiv’s war crimes [Pravda ]

The Ukraine War From Russia’s Perspective

Back to Top
National and World News Roundup

Here is a section on COVID-19. It includes local, regional, state, national, and global items. 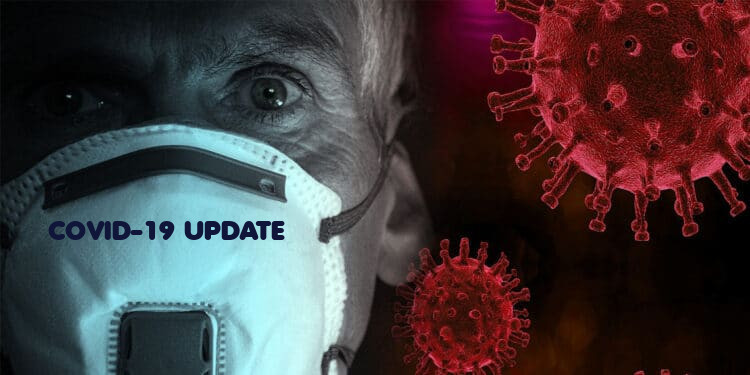 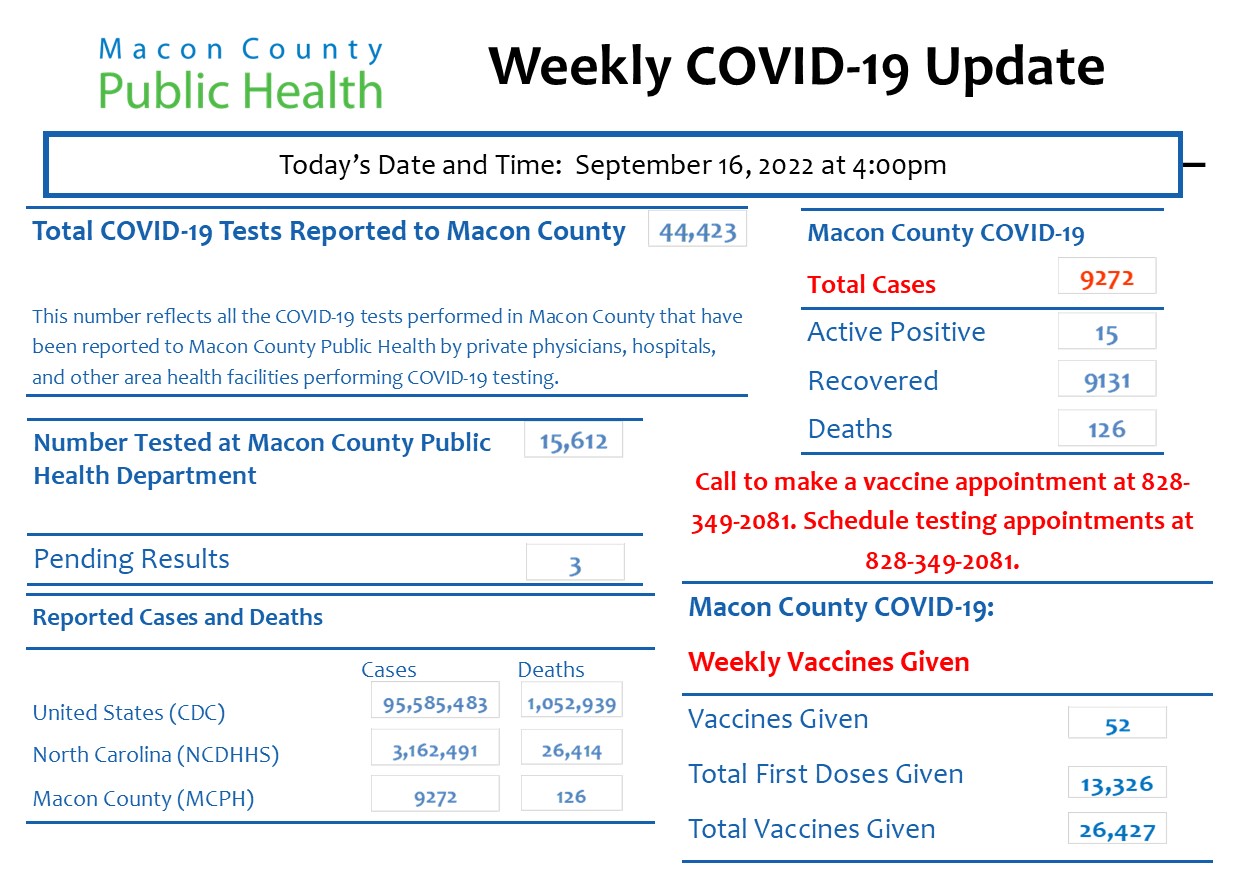 • Tokyo Wants to Build a Mini-City in its Bay [Bloomberg]

• Why is a NASA spacecraft crashing into an asteroid? [AP News]

September 23 is the 266th day of the year (267th in leap years) in the Gregorian calendar; 99 days remain until the end of the year. 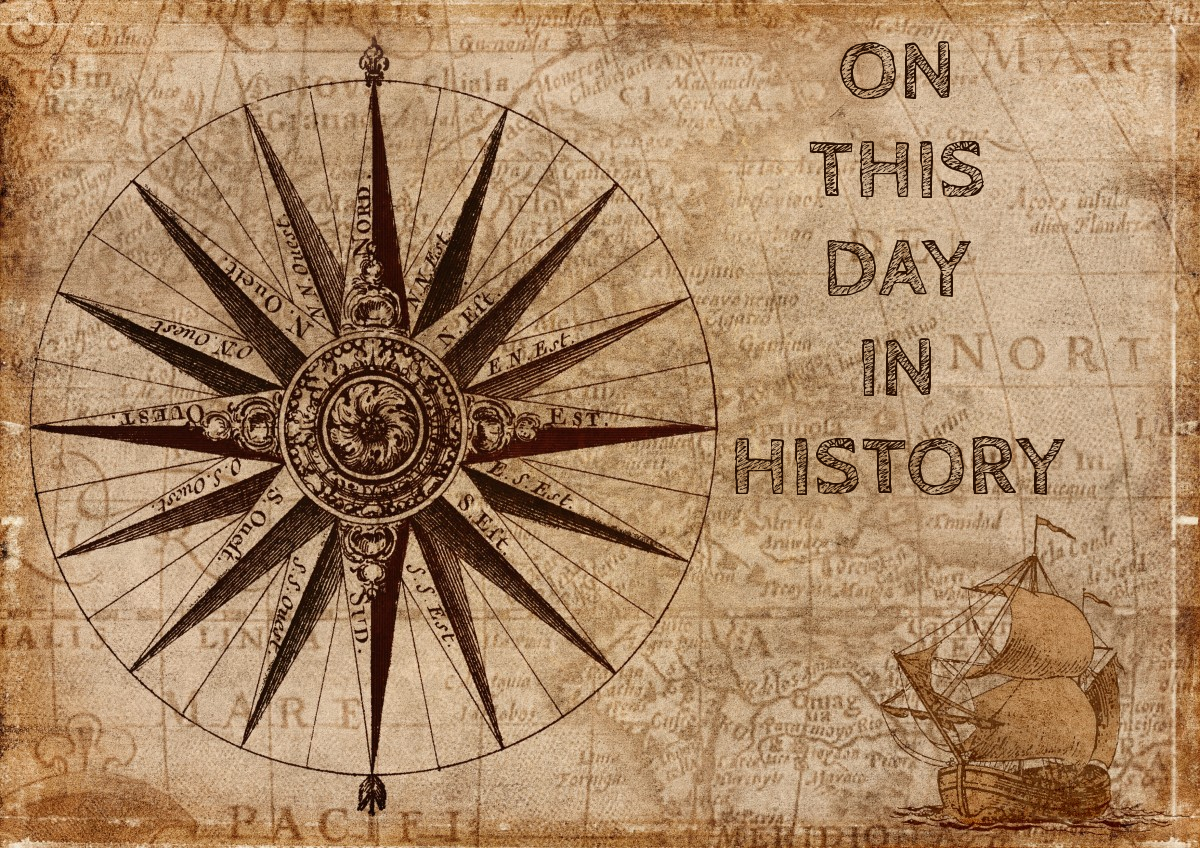