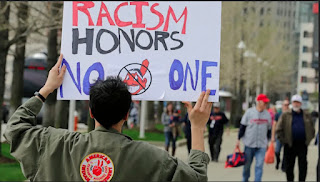 The destruction of America’s past continues, and the federal government is a willing accomplice.  There’s an old saying: “Those who forget the past are doomed to repeat it.”

Let us first realize that the people most offended are white progressive Democrats who have an agenda and narrative they wish to push.
As an individual we journey through life sometimes succeeding, and sometimes failing.  Failure is where we learn our lessons.  Failure is from which comes our wisdom, should we decide to embrace it.  For some, the toughest lessons in life make the individual bitter.  For others, they are an important step towards becoming an improved version of ourselves.  America’s past, the good and the bad, made the country a better place, and it is foolish to try to force Americans to forget those lessons through changing names of things, or tearing down statues.
Cultural Marxism is alive and well in America, and the planners who are working to reeducate America so that we accept communist theories has decided it has its own manifest destiny.  The communists of the hard left progressive Democrat Party, and their allies, aim to change America into something more tolerant.  The success of the United States has ensured that our society has evaded the enemy to this point, but now the enemy is fully within, and radicalized.  The enemies of America’s Foundation roam the Halls of Congress, reside in the highest offices, and teach our children on a daily basis.  They hate America as it was founded for their aim is communism, and nothing less.  Typically, a person does not change what is fine the way it is, so the enemies of America must convince you the system is damaged, evil, and that it was originally founded upon an flawed foundation.
The Biden administration and the Democrats in Congress epitomize the hard left statist hatred for the American System as it was founded, and one of the steps along the way to “fix” many of the wrongs of America’s past was that they recently completed the removal of the word “squaw” from nearly 650 place names on federal land.  The mainstream media is reporting the action to be necessary “to reckon with the nation’s racist past.”

There is nothing racist about the word “squaw”. Originally squa, or ussqua, in Massachusetts, squaw comes from the Algonquian word for “woman”.  In and of itself, there is nothing racist about the word.  Using the word was meant to originally be a dedication, or form of honor, to the women of the indigenous tribes when the word “squaw” (the English version of the word) was added as a part of the name of so many locations in the United States.  It is racist, in truth, to be eliminating words like “squaw” from the view of Americans by changing the names of locations away from it.  If you remove from sight references to the people who were indigenous to the region, you are in the long run erasing them from the memory of Americans.

For example, “Squaw Valley” was changed to “Olympic Valley” to commemorate that it was the site of the 1960 Winter Olympic Games.  So, they think they are fixing racism by eliminating the name that honors the fact that the indigenous peoples were here when Europeans arrived, and their changing the name to commemorate an international competition that originated in Europe and has largely been dominated by Europeans and their ancestors in the New World?
If anything, it was incredibly racist to erase any words related to the indigenous people’s local languages and replacing them with truly European names, if you wish to play in the playground of their lefty little minds.
They are committing racist actions, and then they are telling you the reason was to correct racism, and the general public full of fools are buying it.
What they did was no different than forcing someone with a name with an Asian etymology to change their name to a name common in European families, or to force someone with a Spanish name to change it to a more English-sounding one.  Except, instead of doing it to people, they are forcing their will on the names of locations.
The “Native Americans” in my life told me there is nothing offensive to them about the word “squaw” being used in place names.  All of them I know, and most persons with a majority of indigenous family history, also had no problem with the Cleveland Indians, the Washington Redskins, nor the Edmonton Eskimos.  In the case of the Cleveland Baseball Club they took on the Indians as their mascot to honor a Native American player.  There was nothing racist about it.
The Marxists in government are not eliminating language references to non-European groups of peoples, nor are they tearing down confederate statues, to battle racism.  They are doing it to condition the culture to accept collectivism as it is applied in communist countries throughout history.
The Black Book of Communism written by six authors in 1999 references time and time again how in communist countries the “equity” goal went way beyond what we see on the surface with today’s progressives.  In the Soviet Union, as a friend of mine told me about his visit to Moscow in the early 1970s, curtains were not allowed by law on the windows of people’s residences because then one could hide anything that might be more than what their neighbors had.  In places like the Soviet Union, China, and especially in Cambodia, the attitude of the communists was that your identity is only that of the state’s.  You are owned by the state, you work for the state, and who you are is nothing more than a cog in the machine for the communist state.  You are nothing more than an ox in the field, an animal that labors for the greater good of the community, and any sign of humanity, which includes any ethnic identifications, must be eliminated so that you yourself come to believe that you are nothing more than a member of the communist state.
They are not tearing down statues, changing street names, changing mascot names, and changing location names like “Squaw Valley” because they are trying to stamp out our history of racism.  They are doing so to stamp out any history of identity that is different than the one they want you to adopt.  In their America you are not white, black, Asian, Native American, or any other possibility.  Individualism or any kind must be eliminated.  Our history, to achieve their aims, cannot show that there was ever anything other than the one and only communist state and its mindless automatons who have been conditioned to believe that they are nothing more than who those in charge tell you to be.  In truth, it is they who are the racists.  They are the tyrants.  They wish to tear down everything so that only their power and their society will be recognized as existing today, existing tomorrow, and existing yesterday.  All other indications of a world outside what they approve of must be eliminated from sight, and from memory.
They are killing our past in the name of getting rid of things that are derogatory and discriminating so that you have no past, and no identity, outside of the one they wish you to have.
In the end, the communist left is not bothered by the word “squaw” because of its indigenous origin, anyway.  Their big problem with the word is that it means “woman.”  Remember, these people are so out of their mind that they want to convince you there is no difference between a man and a woman, men can be women and women can be men, and yes, they even believe that men can get pregnant.
The Bible calls that “vain in their imaginations.”  Romans 1:21.
– Political Pistachio Conservative News and Commentary