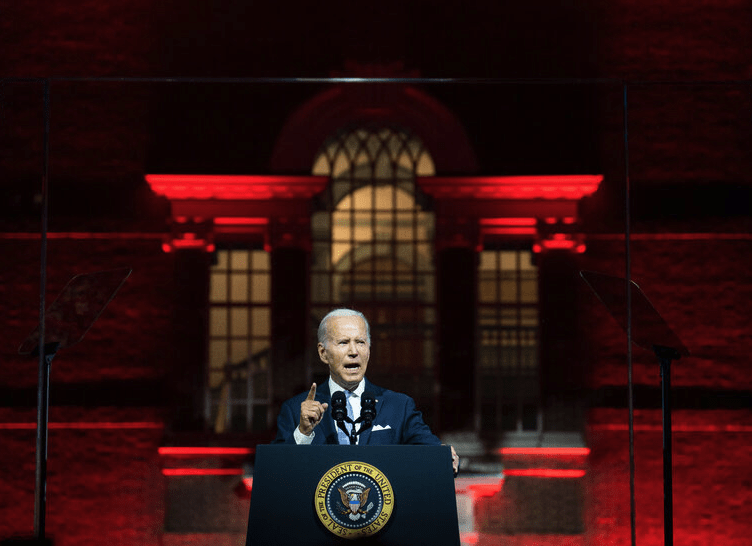 State Of The Nation

SOTN Editor’s Note: Joe Biden’s Philly “Speech from Hell” was a highly calculated political and military act on the part of his NWO globalist masters.  Because that declaration of war against MAGA Republicans was given so soon after he signed legislation authorizing the hiring of 87,000 IRS.  Many Patriots have already been rooted out of the U.S. Federal Government, Corporate America, Universities & Colleges, Medical Centers & Research Institutions, etc. via the patently unlawful Covid ‘vaccine’ mandates.  However, as of September 1, Team Biden is putting their Cultural Marxist Revolution on steroids.  Between now and Election Day, the Right should expect just about anything to occur that demonizes conservatives and disparages Christians across the USA.  This is it, folks!  These cultural marxists are about to morph into full-blown political bolsheviks as their totalitarian juggernaut rolls across the 50 states much like Chinese were shocked and awed during their devastating Cultural Revolution.  The famine (sound familiar) alone during that communist-directed genocide killed more than 30,000,000 people across China.

Now for the real “RED ALERT” here: This dire warning concerns the necessity for all folks on the Right to be acutely aware of the upcoming “False Flag Mass Casualty Events” already planned by the U.S. Intelligence Community to be blamed on MAGA Republicans.  The Left desperately needs a number of “shocking and heinous” mass shootings or mass bombings to blame on Trump supporters as a means of capturing undecided voters.  Between now and Election Day, every conservative ought to be on their best behavior; and especially stay away from any suspicious events and large public gatherings.  After all, most of those crowds are dominated by donkey Democrats, ultra-liberals, super-progressives, closet communists, cultural marxists, political bolsheviks, flaming anarchists, wannabe insurrectionists, virtue signalers, social justice warriors, LGBTQIA+ fanatics, woke protestors, and worse.  Most importantly, virtually all of these snowflake crazymakers have been vaxxed to the max with 2 or 3 Covid jabs plus a couple of boosters to boot.  Do you really want to spend your precious time in a horde of super-vaxxed transhumans who are shedding profusely—24/7?!?!

BOTTOM LINE: Look out. Watch out. And don’t stay out late between now and the first of the year.  Halloween is starting in September this year (yet another early October Surprise); and it’s gonna get very scary … as the POTUS Imposter just showed US all wearing his presidential costume while giving his “Speech from Hell” in his Philly haunted house. See: Here it comes America—the first SEPTEMBER SURPRISE!

*This Alt Media platform has a pretty good track record for calling out the BIG ONES before anyone else even knows what’s really happening.  In fact, SOTN posted the very first exposé on the Internet about the launching of OPERATION COVID-19 in Wuhan, China and the Covid Super Vaccination Agenda worldwide on January 22, 2020, several days before any other alternative news website (See: WUHAN CORONAVIRUS PANDEMIC BIOENGINEERED).  Therefore, our best advice to all of our readers is that it’s time to prepare if you haven’t already.

Biden’s Red Rant: Are Conservatives Being Set Up As Scapegoats For Disaster?

Did the establishment just declare open war on conservatives?  It’s hard to determine what the point of Biden’s recent “Red Rant” is, but it does seem like a shot across the bow of anyone that doesn’t agree with the authoritarianism of the extreme political left.

An important fact to remember is that these types of speeches are ALWAYS intricately planned.  Biden likely didn’t write that speech, a team of writers composed it for him.  Biden didn’t pick the totalitarian blood red lights as his backdrop, someone else planned that out.  The two Marines standing behind Biden were clearly meant as message of intimidation; it didn’t work but that’s besides the point.

The level of hostility in Biden’s rant was carefully calculated, it was not haphazard.  People like to say that Biden has dementia and is losing his mind, but in this case Biden had very little to do with the production.  He is a puppet reading from a teleprompter and everything he says is scientifically constructed by a host of puppeteers.

Biden’s statement that “Donald Trump and the MAGA Republicans represent an extremism that threatens the very foundation of our republic…” is about as inflammatory as it gets when it comes to presidential declarations.  The only step beyond that is to send brownshirts and jackboots door-to-door. 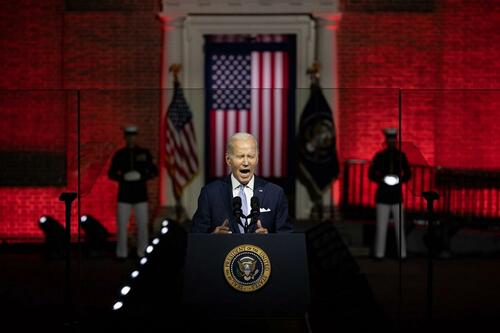 So, what is the motivation of Biden’s handlers in this case?

The speech seems to have divided his base voters.  Even CNN tried to change the blood red color in Biden’s backdrop to pink – The symbolism of death and tyranny was obvious.  It is unlikely that the Red Rant was designed to rally Democrats to the extreme leftist cause.

Furthermore, polls indicate severely diminishing confidence in Biden’s capacity even as a mascot, with 75% of Democrats hoping for anyone other than Sleepy Joe to run in 2024.  The mainstream media has been working overtime to implant the narrative that conservatives will lose in November because of their support for anti-abortion laws at the state level.  However, this message has not been shown to translate into anti “MAGA” sentiment.  Multiple MAGA candidates have won their primary elections showing no sign of public hostility over abortion laws, at least in the Republican side.

The issue here is one of optics, which is why Biden’s vitriolic speech against anti-establishment conservatives might be crafted in preparation for a faltering Democratic Party rather than an attempt to “rally the leftist troops.”  The US economy is headed for an even more substantial downturn as we head into 2023 as the Federal Reserve hikes interest rates into economic weakness and the EU faces energy shortages that could spill over into the global supply chain.  Biden’s team and the media have been trying to spin the stagflation crisis as if all is well, constantly citing high jobs number created by covid stimulus measures as proof of the strongest economy ever.  This spin is about to fall apart as companies advance towards more layoffs at the end of this year.

Biden has done nothing to prepare the public for this eventuality as prices on necessities continue to remain high and average income families are facing financial distress this winter.

It might be in the establishment’s best interest to set the stage now for blaming conservatives for disasters they KNOW will occur next year.   The message will be:  “Look at what happens when you let these right wing lunatics gain government power.  The economy crashes!”

Another explanation is that potential election inconsistencies will arise in November and the establishment knows this; so they are building a narrative in advance to attack any conservatives that raise questions and accuse them of “working against democracy” or “insurrection.”

In either case, Biden’s speech is not the mere dribblings of an old fool, there is intent and calculated propaganda behind it.  We may not know exactly what the true purpose is for months to come.