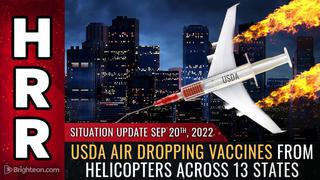 (NaturalNews) The weaponization of vaccines just took another leap forward in America with the recent air-dropping of rabies vaccines by the Texas Department of State Health Services. Using a battery of small planes based out of Del Rio, Texas recently dropped 1.8 million edible vaccine packets over 7,700 square miles of rural Texas.

The packets contain edible rabies vaccines dipped in fish oil and coated with fish meal to entice foxes and coyotes to eat them. Once consumed, the animal is “vaccinated” against rabies, researchers claim.

Of course, what these researchers don’t yet understand in their scientific ignorance (and arrogance) is that they are also engaged in a rabies DNA / RNA bombardment of Texas. As even the Institute of Medicine has admitted, MMR vaccines for use in humans actually cause measles because many of the vaccines contain live viral strains. (https://www.naturalnews.com/033447_Institute_…)

Vaccine manufacturing is conducted under such poor quality control today that vaccines are routinely shipped out the door containing viable viral strains that often infect and sometimes even kill human victims. For example, in 2009 Baxter Pharmaceuticals was caught red-handed shipping out live avian flu viruses to 18 countries (https://www.naturalnews.com/025760.html).

What Texas Dept. of State Health Services workers probably don’t yet grasp is that vaccine manufacturers routinely use vaccines to spread the very disease they claim to be preventing. By injecting live rabies strains into a small percentage of the vaccines dropped on Texas (say, one percent), they are effectively engaging in a DNA carpet-bombing run that will absolutely guarantee rabies continues to remain endemic throughout feral animal populations in the state. This, of course, will result in yet more rabies vaccines being purchased to “combat the problem,” thereby achieving the goal of the entire scam: To sell more vaccines to the government.

Vaccines become weapons to be inflicted on innocents

This air-dropping of vaccines over Texas is all part of the militarization of modern medicine taking place today. In just the past few months, we’ve seen the AMA calling for “mandatory participation” in vaccine trials, where you would be “volunteered” by the government to be injected with an experiment vaccine, at threat of arrest (http://www.prisonplanet.com/ama-journal-make…).

We’ve also seen cases where police have been called and CPS workers threatened to take children away from parents who refused to vaccinate their children (http://www.infowars.com/doctor-calls-police-…).

The Bill & Melinda Gates Foundation has already conducted bizarre experiments on genetically engineered mosquitoes that carry vaccines to be silently injected into unsuspecting humans. And that same foundation has also invested heavily in covert vaccination technology that could, for example, vaccinate you with a spray mist used at airport security checkpoints (https://www.naturalnews.com/028887_vaccines_B…).

As these examples show, vaccines are increasingly being used in the context of weapons: air-dropped, covertly injected or even forcibly injected at gunpoint. These are signs of a system of medicine that operates like a police state, where people are stripped of their rights and freedoms “for the good of society.” The individual is sacrificed, in other words, to serve the interests of the state. Such a philosophy is fully consistent with the entire history of secret government-funded medical experiments against blacks (Tuskegee), Guatemalans (https://www.naturalnews.com/033483_Guatemalan…), and even criminal medical experiments involving Dr. Jonas Salk and the polio vaccine (https://www.naturalnews.com/031564_Jonas_Salk…).

Here’s a list of just a few of the criminal, inhuman medical experiments that have been conducted on innocent people by the U.S. government: https://www.naturalnews.com/022383_research_e…

All this adds up to classic eugenics – especially given that vaccines in humans are strongly tied to lifelong infertility, spontaneous abortions and birth defects. It’s all part of a human de-population agenda that Bill Gates has openly admitted to in his public speeches about “reducing world population” with the help of vaccines (https://www.naturalnews.com/029911_vaccines_B…).

The law of unintended consequences will come back to haunt Texas

The state of Texas, of course, claims its air-dropped rabies vaccines have been a huge success. Rabies cases have plummeted in every area targeted by the vaccine carpet-bombing runs, they insist. But even if you believe those numbers, you must ask: At what cost?

What are the unintended consequences of air-dropping viral fragments of rabies over 7,000 square miles of open terrain? Engaging in such an act is just begging to be humbled by nature as that viral material gets recombined into some other deadly pathogen that exists in the wild, creating a hybrid “Franken-virus” that never would have existed without this arrogant “scientific” intervention. Can you imagine a “rabies bird flu pandemic?” Mother Nature can!

Add to this the fact that many deer in Texas are being fed genetically modified corn (GMOs), and you now have engineered genetic material from bt corn residing in the flesh of deer that might be consumed by the very same coyotes who are eating the air-dropped rabies vaccines. What might be the consequences of such a dangerous genetic experiment involving tens of thousands of animals in the wild?

No one knows. And that’s the point, because the Texas scientists don’t know either. They were all educated at Texas A&M which is still stuck in the era of chemical agriculture, and they think spraying everything with Roundup is the solution. (Seriously, Texas A&M graduates are totally infatuated with the use of chemical pesticides on everything…) They don’t know anything about the dangers of GMOs, nor the recent research published in Cell Research that shows how microRNA (small fragments of genetic code) can pass through the digestive system, attach to organs such as the liver, and alter the physiology of those organs. (http://www.theatlantic.com/health/archive/20…)

These “scientists” do not know what they are doing. They are narrow-minded and short-sighted. They play God with Mother Nature and hope they don’t make a mistake. They risk the future integrity of Texas agriculture and wildlife on their bizarre Frankensteinian schemes that run the risk of wreaking total havoc with the biosphere. They are, like most other conventional scientists, blinded by their arrogance.

It’s too late to stop them, of course. This program has been going on for 18 years, they say. And they claim it’s an amazing success! It’s so successful, in fact, that now they’re moving on to develop an airdrop vaccine for skunks. So in 2012 and beyond, they’ll be carpet-bombing Texas with skunk rabies vaccines.

Gee, did they ever consider the possibility that the reason skunks have so much rabies is because they’ve been dropping rabies DNA / RNA onto the landscape for nearly two decades? And after they treat the skunks, they still have a long list of animals to target with yet more vaccines, see? What about a raccoon vaccine? How about wild pig vaccines? Deer vaccines? At what point does this effort vaccinate all the wild animals of the world ever end?

If they keep this up, before long Texas will become a DNA battlefield where the entire natural ecosystem is massively contaminated with genetic intervention at every level.

But of course, it keeps the vaccine companies in business, doesn’t it? And as Rick Perry proved with his HPV Gardasil scandal, Texas loves to force vaccines on innocent people while collecting payoffs from the drug companies that make them. (https://www.naturalnews.com/033705_Gardasil_R…)

You can bet someone in the Texas Department of State Health Services is receiving a nice, fat payoff for all this.