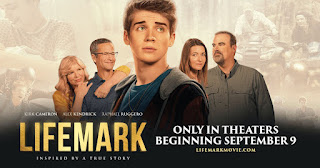 Isn’t it ironic and just like God, that in just over two months since the Dobb vs. Jackson U.S. Supreme Court decision overturned Roe v. Wade, a powerful movie supporting the Sanctity of Human Life hits movie theaters? There are no coincidences.
Lifemark is a timely, truth-telling, pro-human life, pro-adoption movie.  Lifemark, which opened Friday, September 9th, 2022, nationally beautifully summarizes the Life issue from the perspective of everyone involved: the birth mother, the adopted child, and the parents that raised the adopted child.

Lifemark is a story about adoption, abortion, alienation, anticipation, and admiration. David is the focus of the story; he was adopted when his teenage mother gave him up under difficult circumstances. His adoptive parents where childless after their own two biological children died from a rare disease when they were very young. David’s adoptive parents raised David with all the demonstrated love anyone could imagine.
The movie builds up to David’s meeting his biological mother and later his biological father. Admiration, acceptance, and forgiveness all played a part in the eventual meeting.
Initially, the movie was scheduled for a limited run beginning Friday, September 9th, through Thursday, September 15th. However, it was extended and as of September 22 is currently playing in Mansfield, Ohio at Cinemark 14 and across the country. Check theater for times the movie is playing.  It is a must-see movie and is antithetical to the trash Hollywood typically produces. It is family friendly. Let us support quality entertainment and reject what Disney and others dish out these days.
You can see another review of the movie here by FrontLinesOhio.
Note:  This movie to a large extent was based on a documentary. I Lived on Parker Avenue, which can be viewed for free online. Meet the real David, Jimmy, Susan, and Melissa and see how the reunion happened in real life.