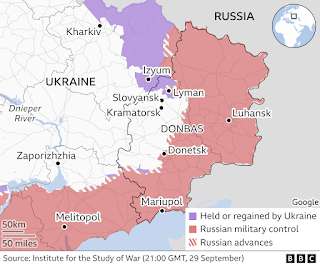 The seven month old War in Ukraine that began with a Russian invasion has been an interesting phenomenon to watch, not from a viewpoint of “war”, but from a political angle.  The world has decided that Russia is the bad guy and Ukraine is the good guy.  That’s how war works, right?  Someone has to be the villain, and someone has to be the guy in the white hat or the damsel in distress.

I think that it is interesting that the mainstream popularity contest winner is the plan to line up in favor of the poor damsel under attack, Ukraine, which is led by a not so good guy Ukrainian President Volodymyr Zelensky.  Have we forgotten that the Ukrainian government is:

That does not mean I think the opposite of the mainstream when it comes to this whole Russian-invasion-of-Ukraine thing.  The reality is the war is between two bad actors.  I feel bad for the citizenries pulled into the twisted war that all of the governments are finding a way to prosper from in one way or another (war can be very profitable from an investment angle).  The whole thing, to be honest, is nothing more than an “opportunity” for the global cabal and hard left baddies who are itching to do what they can to:
Russia’s Vladimir Putin is an interesting sort, to be sure.  But, one thing he is sure of, whether he’s a communist hardliner, or not; a power-player seeking a “the south will rise again” moment for the KGB, or not; or a straight out dictator, or not; Putin knows history and he knows weakness when he sees it.  So, he knows that America is experiencing the Cultural Marxism that plagued Russia in the years preceding the Bolshevik Revolution, and that the current American administration and Democratic Party domination in the Deep State is:
That all said, it turns out that Russia’s leadership under Putin is so determined to do whatever they are up to that they are willing to sabotage underwater pipelines (or, at least that is the way it is being reported).
According to the Heritage Foundation, “Last week [the ruling elite in] Europe noticed a sudden drop in pressure in the Nord Stream and Nord Stream II natural gas pipelines, which connect Russia with Germany. Since that time, a total of three leaks (two in NS1 and one in NS2) across both pipelines have been found. Seismologists in Denmark registered explosions in the area measuring around 2.1 and 2.3 on the Richter scale.”
I’ve been saying if you want to stop the war in Ukraine all the United States needs to do is kick into high gear domestic production of oil and produce such a massive amount of the resource that we glut the market, and begin to sell our fuel to Europe at a very low price that we still benefit from.  It would:
The problem is, the plans for that needed to start long ago, and it is likely now too late to pull that trigger.
Heritage continues: “The leaks are in an area of the Baltic Sea just east of Bornholm Island, a strategic Danish outpost. The leaks are almost certainly an act of Russian sabotage. Several European nations, including Germany, have come to this same conclusion. In fact, the CIA reportedly warned the Germans of this very possibility over the summer.”
If the “Russia bombed the pipelines” theory is true, why is the world shocked that Russia was willing to scribble outside the lines?  One of the things my daddy taught me when I was just a little bugger was that the first rule of a street fight is that there are no rules.  You do whatever it takes to win, even if it means gouging eyes, or grabbing someone by the hair and slamming their face into something.  Putin is simply fighting what he considers to be a street fight.  Remember when war wasn’t about just striking military targets?  In history the winners of wars were the countries who were willing to make war as miserable for the populations of the opposition as possible, be it civilian bombing runs from the air, cutting off resources or the amenities of life, or dropping an atomic bomb.  Right, wrong, or in between, the reality is, war is hell, and the ones who make war the most hell usually wins.
The first horror recognized by the lefties in the mainstream media about the Nord Pipeline Sabotage Run by Russia, of course, is the environmental impact of methane released on a scale that would make China’s carbon footprint look like an indentation in the dirt by a chicken toe; not that, as Heritage points out, Russia is concerned at all about carbon emissions.
In short, the Russia-Ukraine War is a street fight in the eyes of Putin’s team, and if clawing Ukraine’s eyes out doesn’t win the war, ripping at the faces of their European sympathizers might.
The U.S. and its globalist allies in eastern Europe has been looking for a way to sever energy ties with Russia, and the Nord Pipeline sabotage definitely is doing the trick.  But, where will the power to fuel Europe come from now at this late juncture in the game?  Europe doesn’t have the answer.  The U.S. has cut off its energy production with a shut down of the Keystone Pipeline and the halt of nearly all domestic production, and the Muslims controlling Middle Eastern oil are chomping at the bit to put their price as close to the upper regions of the stratosphere as possible.
Meanwhile, thanks to chasing after “renewable energy” like California has been doing, the lights might be going out in Europe in the foreseeable future.
The timing of all of this is also interesting since just recently the “leaders of Denmark, Norway, and Poland just joined together at a ceremony to open a new pipeline bringing Norwegian gas to Poland via the Baltic Sea.” (Heritage)

Thanks to the attack in Europe a new spike in gas prices is underway, shooting prices upward by about 12 percent; and this is all happening as the dawn of a very cold winter looms on the horizon.

Heritage suggests that the sabotage of fiber optic cables, could be next.  “Russia is known to have surveyed key fiber optic cables spanning the world’s oceans. In January, a fiber optic cable connecting the Norwegian mainland with its Svalbard archipelago in the Arctic was severed in an incident which has been deemed likely caused by ‘human impact.’”

Russia, of course, has denied the whole thing and are saying that they are greatly concerned.  As more hell breaks loose there is no doubt Russia will then blame The West and then begin planning their next street fight sucker punch (if that is, indeed, what they are up to).

Meanwhile, back to the leftist view of an opportunity that they can’t let go to waste, “It’s a tremendous opportunity to once and for all remove the dependence on Russian energy and thus to take away from [Russian President] Vladimir Putin the weaponization of energy as a means of advancing his imperial designs,” Antony Blinken, the current U.S. Secretary of State, declared.
Info Wars is reporting that “The US likely stands to gain the most from the destruction of the Nord Stream 1 and Nord Stream 2 gas pipelines…Washington has for years been trying to convince European leaders to swap Russian gas for its LNG…Putin blamed the explosions [on the Nord Pipelines] on ‘the Anglo-Saxons,’ a Russian colloquialism for the US-UK transatlantic alliance.”

“It’s obvious to everyone who benefits from it,” Putin explained. “Those who benefit are the ones who have done it.”

Is it possible that Putin is correct on this one?  Did the U.S. and its globalist leftist European allies perform a case of self-mutilation so as to:

Meanwhile, Europe is faced with:

Oh, and watching all of this, Hezbollah has decided the iron is hot, and is planning their own military operations against anyone who sides with The West.
We are seeing history repeat itself, once again.  The fact is, one thing history teaches us over and over, “The logic of tyrants always ends in destruction, and death.”
– Political Pistachio Conservative News and Commentary