Part of our developing series on the
Electronic Registration Information Center

There’s far more than meets the eye with the Electronic Registration Information Center (ERIC). For a decade, ERIC has been touted as a nonpartisan, good-government solution to messy voter rolls. But new information about its murky origins, ties to partisan activists, and spot in the Left’s mammoth voter registration machine have pushed this organization into the spotlight for election integrity groups.

Born in the Shadows

In 2008, Pew hired partisan operative David Becker, a trial attorney who earned a reputation at the Justice Department as a “hardcore leftist” who “couldn’t stand conservatives,” to lead its election reform initiatives. Becker soon focused on promoting new voter registration policies in the states, culminating in ERIC four years later.

Two 2011 grants from George Soros’s Foundation to Promote Open Society “to support the Pew Center on the States’ voter registration modernization initiative” and “expand [its] scope and scale” suggest that George Soros had a hand in incubating ERIC.

Becker spent the next four years urging state legislatures to join ERIC, and as of writing, 32 states representing over 61 percent of the US population are ERIC members. He left in 2016 to start up the Center for Election Innovation and Research (more on that later).

ERIC claims that membership in its voter roll maintenance services will ultimately save the states money compared to doing the work themselves. Annual dues range from $16,000 to $74,000.

Less advertised but vastly more expensive is its requirement that member states identify and register eligible-but-unregistered voters—what the organization calls “EBUs”—or forfeit their ERIC membership. Virginia’s Department of Elections estimates that the total cost of participation in ERIC averages $300,000 per year, of which just $39,000 is dues.

ERIC’s ability to force states to conduct taxpayer-funded voter registration campaigns makes it one of the Democratic Party’s most devastating weapons in turning out its preferred voters each election cycle.

Much or most of that money came from left-leaning foundations such as Ford, Carnegie, and Wyss. A secret memo in 2015 titled “Using Voter Registration to Reshape the U.S. Electorate” to the head of the Wyss Foundation explains why. 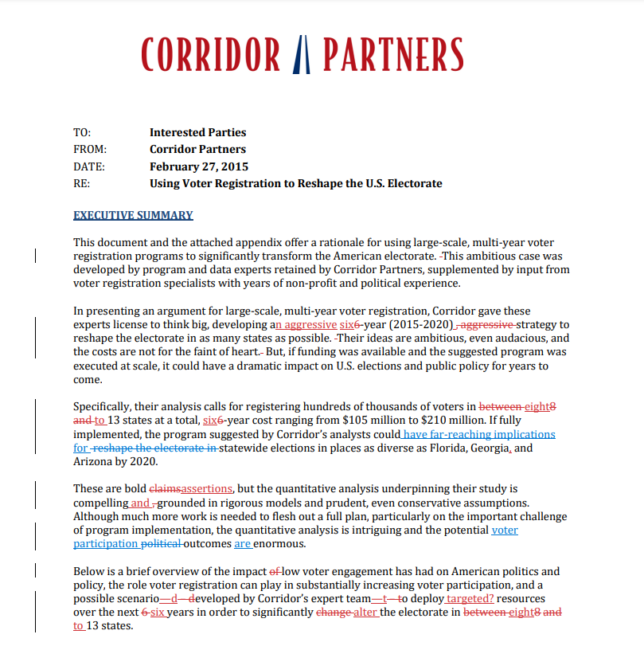 The so-called Corridor Partners memo promises that “large-scale, multi-year voter registration programs” exclusively focused on “non-white” voters could “fundamentally reshape the electorate in as many as 13 states” by 2020. The price tag: $105–$210 million across 8–13 states, notably including Arizona, Georgia, Texas, and other battlegrounds.

ERIC—which was born near the peak of this strategy’s maturity—offers a way to force taxpayers to foot the bill for the Left’s biggest project.

No wonder, then, that the Corridor Partners memo includes ERIC among its “factors that could impact registration rates,” observing:

The Pew Charitable Trusts has developed a program called [ERIC] to encourage states to reach out to potentially eligible but currently unregistered voters. . . . Currently, three states recommended for investment are part of the ERIC program: Colorado, Nevada, and Virginia. [emphasis added]

“Over time,” the memo continues,

it is expected that ERIC will significantly diminish the number of eligible unregistered voters in member states and reduce the number of movers needing re-registration by third-party organizations. [emphasis added]

As with automatic voter registration policies, the objective is to reduce dependency on activists and mega-donors by shifting the burden onto taxpayers. If the Left can succeed in making “citizen” synonymous with “registered voter,” these partisans will be able to focus all available resources on getting out the Democratic vote.

It’s surely no accident that Planned Parenthood, Common Cause, the SEIU, and others include ERIC membership among their slate of election “reforms”—a list that also includes automatic and same-day voter registration, ballot curing, restoration of felon voting rights, and permanent vote by mail.

In the next installment, ERIC has troubling links to the Center for Election Innovation and Research.