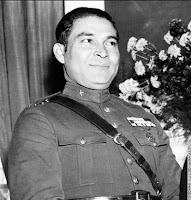 A lot of things happened in January in Cuban history.   Jose Marti, the leader of independence against Spain, was born in January 28, 1853. In 1959, the so-called “revolution” happened.  The U.S. broke diplomatic relations with Cuba in January 1961.  And we remember that Fulgencio Batista was born in January 1901, one year before Cuba became an independent nation in 1902.  His name is all over 20th-century Cuban history. It’s also difficult to mention his name without getting a strong reaction. He died in exile in 1973.

I was born in the 1950s, the  last decade of Batista’s Cuba.  So I was in between the two eras, Batista and Castro.  What was Batista’s legacy?  Yes, he overthrew a president in 1952 and corruption was a problem, but don’t believe that silly movie Godfather II.  No one was running to their boats and there were definitely no rebels ready to commit suicide in protest.  It did not happen.

Nevertheless, I make no excuses for Batista’s mistakes.  My parents were not “Batistianos” and were super critical of that coup.  As my late father would tell me, yes we had some problems but the coup was not necessary.  To be fair, it was not the first coup in Cuban history.

What about the rest of Batista’s story? Cuba was a young and vibrant country with hope and a future.  In other words, the island of Cuba attracted people rather than driving its citizens away looking for a future.

It is really sad to watch Cuba today. The young escape and look for a better life, preferably in the U.S. The old get stuck behind.

There were no Cubans packed on rafts arriving in Florida during Batista’s regime. One way or another, Cuba had room for all Cubans. There were disagreements and lots of shouting, but Cubans stayed on the island.  Instinctively, everyone knew that there was a future in Cuba, no matter how passionate the disagreements were.  Again, as my late parents used to say, yes, we had problems but we knew that one way or another we’d work it out.  As they had in the past.

It is even more painful when you realize that pre-Castro Cuba attracted thousands of immigrants from all over the world.

Between 1900 and 1930, the first three decades of Cuban independence, about one million immigrants flooded into the island, mostly European, and mostly northern Spaniards. This population tsunami also included Asians, Levantines, and Jews. These immigrants doubled the population of the island and changed its complexion, literally. Tens of thousands of immigrants continued to flow into Cuba every year after that, up to 1958.Immigration from the U.S. was comparatively slight, but in 1958 there were more Americans living in Cuba than Cubans in the U.S.A. Emigration from Cuba was minimal during this half century.

Rates of immigration as high as this and of emigration as low require a robust and growing economy, and a considerable degree of political stability.

Some of those Spaniards who came to Cuba were my ancestors.  They came looking for a better life and they found it.  They became successful entrepreneurs and left us a legacy of family and a strong work ethic.

So what’s the bottom line? Cuba was better off in 1959 than it is today. Batista was better than Castro. This is not an unconditional defense of his record. On the contrary, it is an honest review of Cuba under Batista and the island under a communist regime.

Batista may have disappointed Cubans, but the island prospered. Castro has failed Cubans, and all you have to do is look at those photos of Havana yesterday and today. It’s time to give Batista some credit for the Cuban economy and the middle class that ended up moving to the U.S.

P.S.  Check out my blog for posts, podcasts and videos.