“Federal Reserve Sinks Into Funny-Money ‘Normalcy’”
By Bill Bonner
BALTIMORE, MARYLAND – “Last night we got the call from the hospital. “Dad… You’ve got a new grandson.” We hastened thither to meet Charlie. 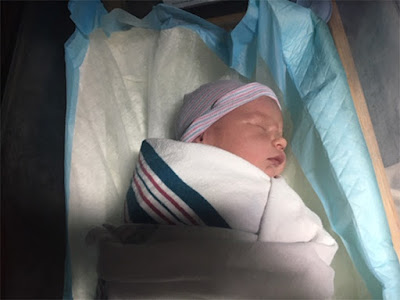 Charlie, five hours old.
Facts of Life: Life goes on. People collide. Genes… atoms… facts… and opinions, too. Republicans and Democrats. Bull markets, bear markets, booms and busts… Truth and lies. Trump and Romney. Sometimes the collisions are fruitful. Sometimes, they are disappointing. So, let’s go to the news. A headline from Bloomberg tells us what we already knew. The Federal Reserve has run into the reality of an Inflate-or-Die world. There’s no going back to “normalcy”:
Powell Sees Low Rates, Crisis-Era Tools as Facts of Life for Fed: The Fed knows that the phony boom depends on more and more phony money. Take the money away and the whole thing implodes. Them’s just the facts of life. The funny money enters the financial system as debt. It is lent out… increasing the amount of “liquidity”… but also increasing the amount of debt.
Here’s Bloomberg again: “Americans increased their borrowing for the 22nd straight quarter as more households took out loans to buy homes or refinance existing mortgages, according to a report released today from the Federal Reserve Bank of New York. Total U.S. household debt rose by $601 billion in the fourth quarter from a year earlier, or 1.4%, surpassing $14 trillion for the first time, the New York Fed’s quarterly household credit and debt report showed.”
That’s $1.5 trillion above the previous peak in the third quarter of 2008. Overall household debt is now 26.8% above the second-quarter 2013 trough. What a pity. The 21st century was meant to bring the U.S. to a level of perfection never before achieved by humans. So far it has been a dud.
21st-Century Dud: When the clock ticked over to 12:01 on January 1, 2000 the world did not end. The dreaded Y2K bug turned out to be harmless. No computer failed. No vital service was suspended. The banks, the gas stations, the TV – everything still worked! This was a favorable omen… Like a red sky at night… it signaled a delightful century ahead. And why shouldn’t it be?
The U.S. was now master of the entire earth – and much of space, too. Its warships could blast any sub, destroyer, or supertanker out of the water. Its corporations could beat out all competitors… or so it was thought. Its government… its markets… Hollywood and Burger King – everything about it was widely admired and emulated.
All of this triumphal news was vouchsafed by the stock market, where the leading companies – the 30 Dow stocks – were worth more than any time in history. In nominal dollars, the Dow sat at 11,497 on January 1, 2000. In gold, it took 44 ounces to buy the Dow… more than 20 times more than it did 20 years ago.
Life was good. But Americans expected technology to make it even gooder. Electronic communications, computers, and all the razzmatazz of the internet era were supposed to improve almost everything. Then, on March 11, 2000, the dot-coms collapsed. And people began to ask questions. We have access to much more information and entertainment. But what difference does it make?
Overwhelmed by Information: Getting older does not necessarily mean getting better. And every new technology is not necessarily an improvement. People got cable and Wi-Fi, along with electronic controls for their heat, air conditioning, and security. But they spent hours trying to “program” their new gadgets… and many more hours checking their Facebook updates.
They switched from talking to each other to talking to Siri and Alexa. They stopped reading the newspaper and began to read the fake news online.
They drove electric cars. But what was new? Thomas Edison unveiled his electric automobile, with an alkaline battery, in 1889, 114 years before Tesla was founded.
And with their hand-held devices… laptops… and computer screens in front of them, they were overwhelmed by information… swamped by it; they were drowning in it. Hundreds of emails… thousands of messages… quadrillions of pixels and bytes. They couldn’t keep up with it. Investment writer James Davidson reports:
More information has been accumulated in the past couple of years than in the previous 5,000 years of human history. According to a report from IBM, 90% of the data in the world today has been created in the last two years at a rate of 2.51 quadrillion bytes of data a day.
More was not better. The GDP numbers were disappointing. Federal deficits were disappointing. Savings, capital investment, innovation, productivity, start-up, and wage-growth numbers were all disappointing. The Information Age was a disappointment. The War on Terror was a disappointment. Bush was disappointing. Obama was disappointing. And now MAGA? Another big disappointment. Stay tuned.”
- https://www.bonnerandpartners.com/

Source: http://coyoteprime-runningcauseicantfly.blogspot.com/2020/02/federal-reserve-sinks-into-funny-money.html
BeforeItsNews Announcements
Step 1: Get the Telegram App & Get Stories Direct to Your Phone or Computer Without Censorship! Get the Telegram App in the App Store or at
https://telegram.org/

Loading...
"Not by might, nor by power, but by my spirit, saith the Lord of hosts." Zechariah 4:6
Read it..
BEFORE IT'S NEWS
SIGN UP FOR OUR NEWSLETTER
Today's Top Stories
Trump Was & Is to Be Taken Off the Ballot According to Giuliani's Sources! Exclusive Interview Revealed
Breaking!! Trump Plans Quarantine of Americans in United States!
Mark Taylor: Q Anon! Weinstein Didn't Kill Himself
Really Big News About The Coronavirus In The United States Just Dropped
Dave Hodges & Jamie Walden (2/27/2020): Peru and the End Times Connection — Where the Coronavirus Agenda Is Really Headed, Regardless of its Source — And More!
If Your Body Is Acidic, Here Is What You Need to Do (Video)
Major Outbreak in New York City! United States Pandemic! - Great Video
The Storm has Arrived! Markets are in Free Fall. Next week it is War Coverage with Angelina Jolie before Mecca is Destroyed.
Operation Coronavirus Pandemic: Why the Bioweapon Was Launched! - Must See Video!
Border Patrol Officer Talks About the High Strange Encounters on the Border
Loading...
Featured
Coronavirus (California Wildfires Edition): "There Is Nothing To Fear, But Fear Itself"
Best & Taylor FLASH Update (2/27/2020) — War in the Middle East? — Turkey Moving on Damascus?
Breaking: Solano County Coronavirus Patient Wasn’t Tested for 11 Days Because California Has Virtually Zero Test Kit Dozens of Hospital Workers Exposed! +Video
X22Report Future Topic Coming Into Focus, Wait For It, Timing Is Everything - Episode 2108b #QAnon
CoronaVirus: An “Economic Cataclysm” Devastating Economic Consequences To Come - Mike Maloney & Chris Martenson (Part1)
Coronavirus Situation Is Quickly Going From Bad To Worse! - Must See Chris Martenson Video!
Milwaukee Shooting Some Facts Come Out, And We Will See About More "Narrative"
Coronavirus Fatality Rate Estimated
Milwaukee Shooting -- Some Predictions Before the Real Facts Come Out
COVID-19: Transmission of Viruses, Beware