“What Really Happened Last Week?”
by Brian Maher
“Yes, but why was last week’s correction so pitiless? Monday we put our finger on “passive investing.” That is an investing strategy that flows with the tides. A rising market tide lifts all vessels — even the leaking, decrepit, unseaworthy hulks. But when a strong gravity pulls the water the other way… all go down with it. And it was an angry moon last week, exerting a mighty tug.
But passive investing may only tell a portion of last week’s harrowing tale. We have clawed our way deeper into the facts — and deeper again — to arrive at a fuller explanation. Details to follow. But here is your hint: It implicates the Federal Reserve… despite our unshakeable faith in its infallibility. First, today’s tidal reading…
Stocks Rise on a Surging Tide: We are pleased to report the water rose today. And high… The Dow Jones rose 1,173 points — its second-highest (point) gain in history. The S&P gained 127 points. And the Nasdaq, 334. And so all three indexes have uncorrected. That is, they have all three emerged from correction.
But why? Explains CNBC: “Stocks surged on Wednesday as major victories from former Vice President Joe Biden during Super Tuesday sparked a massive rally within the health care sector… Tuesday’s primary results sent health care stocks flying. The S&P health care sector surged 5.8%, posting its best day since 2008. UnitedHealth and Centene jumped 10.7% and 15.6%, respectively. Shares of UnitedHealth had their biggest one-day gain since 2008. Many investors have applauded Biden for his middle-of-the-road tact in contrast to the more progressive policies of Sanders and Sen. Elizabeth Warren.”
Gold shed $6.10 today. But the somber bond market merely shook its head… and sighed. 10-year Treasury yields remain under 1%. But to proceed… If passive investing does not fully explain last week’s fearsome correction… what does?
The Great Liquidity Flood: Our tale begins last September… A main line ruptured deep within the financial plumbing. And liquidity ran dry in the critical “repo” market. Pouring icy sweat, panicked, the Federal Reserve rushed in with the hoses… and let the valves out. It emptied in so much liquidity over the next four months, it inflated its balance sheet $400 billion — a $1.2 trillion annualized rate. Not even during the lunatic days of the financial crisis did it carry on at such a gait: 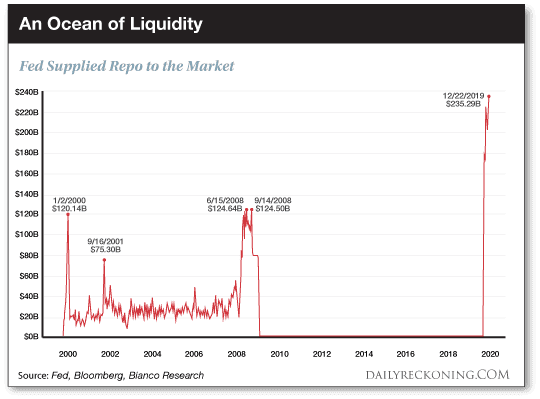 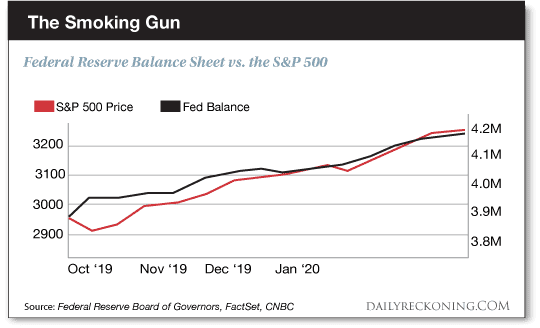 And so the Federal Reserve inflated a bubble — a bubble within a greater bubble. But here our tale gathers steam…
The Fed Closes the Hoses: In December, the Federal Reserve tightened the valves. And liquidity, formerly flowing in gushes, dwindled to a trickle. And so the delirious stock market lost its energy… like an airplane that has lost its lift. The thing went on momentum for a time. But nothing was pushing it along. And so it was vulnerable…
We introduced you to Mr. Graham Summers yesterday. In reminder, he is a senior market strategist at Phoenix Capital Research. From whom: “From September 2019 to December 2019, the Fed provided some $100 billion in liquidity to the financial system every single month. The Fed then stopped these policies on a dime in mid-December. From that point onward, the Fed’s balance sheet, which expands when the Fed is providing liquidity to the financial system, completely flatlined…
Lost amidst all the talk of the coronavirus and potential global economic contraction is the fact that the Fed’s balance sheet has been flat to down since early December. This tells us the Fed completely ended the aggressive liquidity pumps it was running from August through the end of the year…”
You can see these developments in the chart below: 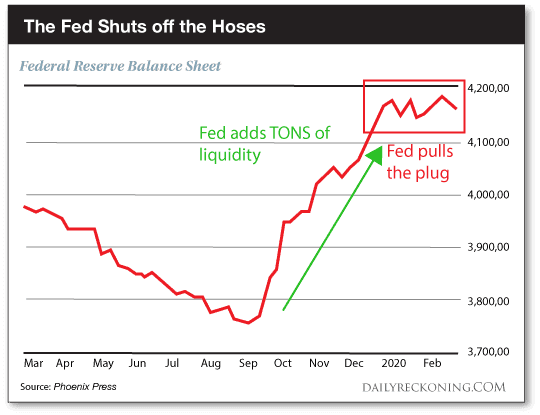 The “Pin” That Popped the Bubble: Then the coronavirus chewed through its leash… and ultimately through the ticker tape. But it was merely the “pin” that punctured the bubble, says Summers: “Now, you can see the impact these policies had on the stock market in the chart below. The Fed created this environment with its monetary policies. The fear of an economic slowdown due to the coronavirus was simply the “pin” that burst this mini-bubble.” 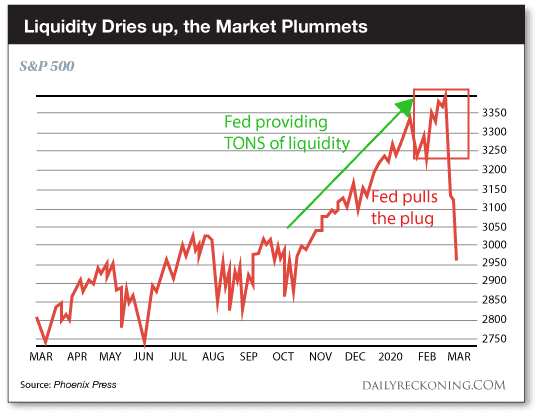 What does Mr. Summers conclude?: “The big lesson here is this: The financial system is now completely addicted to Fed liquidity. The Fed can try to talk tough about withdrawing liquidity from the system, but at the end of the day, the market is going to force the Fed’s hands.”
In turn, we conclude: Passive investing — twinned with plateaued liquidity — conspired tp deal markets the swiftest, sharpest correction since 1928. This fearsome combination sent markets careening from record heights to correction in a mere six days. But you can be sure the Federal Reserve is preparing to unfurl the hoses yet again…
Liquidity Running Dry Again in the Repo Market: It appears the repo market is entering another drought. And the major banks — primary dealers, so called — have reacquired a panting thirst. They have requested $111.48 billion in overnight loans from the Federal Reserve. But the Fed can only dole out $100 billion under existing arrangements. “Oversubscribed” is the term. That $111.48 billion comes on top of the $108.6 billion dealers requested the night before — again, oversubscribed.
The Federal Reserve had intended to suspend repo operations next month. But reports The Wall Street Journal, in predictable understatement: “Those plans could change amid the rapidly shifting economic and financial outlook. Some in the market are already wondering if the Fed will increase the size of its temporary operations to accommodate the high level of demand from banks.”
We wager high those plans will change. 180 degrees. Will it reinflate the stock market? We have no answer. The market faces a mighty foe in a miniature virus. But little surprises us these days.
Dangerously Low on “Dry Powder”: Meantime, the Federal Reserve squanders what little “dry powder” that remains. Yesterday’s 50 basis point blast reduced the federal funds rate to between 1% and 1.25%. Goldman Sachs projects another rate cut when the FOMC huddles in two weeks. And another in April (each 25 basis points). If true, the Federal Reserve will be reduced to scraping powder off the floor. If recession swept in tomorrow… it could scarcely fire off a cannon. And given the global economic outlook… It will be unable to restock its magazines for years and years — and years.”
- dailyreckoning.com

Source: http://coyoteprime-runningcauseicantfly.blogspot.com/2020/03/what-really-happened-last-week.html
Before It’s News® is a community of individuals who report on what’s going on around them, from all around the world.