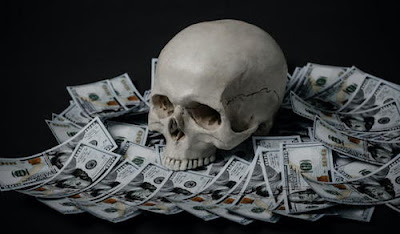 “The Feds’ Fatal Flaw… and a Wake-Up Call”
By Bill Bonner
“The whole aim of practical politics is to keep the populace alarmed (and hence clamorous to be led to safety) by an endless series of hobgoblins, most of them imaginary.”
– Baltimore’s own, H.L. Mencken
SAN MARTIN, ARGENTINA – “Google “Coronavirus is a wake-up call…” and you get more than 200 million suggestions. It’s a wake-up call for climate change. It’s a wake-up call for global governance. A wake-up call for virologists. A wake-up call for the Post Office…
Most of the writers are waking up to the need for more government. The logic is simple enough. Government is meant to protect us, they claim. Then, the extrapolation… more government = more protection. “Good government is the difference between living and dying,” says a Bloomberg “wake-up” piece. People are afraid. They see devils hiding behind every dumpster… bogeymen threaten them over breakfast. Of course, they want someone to protect them. Naturally, they turn to the people with guns. The gist of the following 500 words is this: They should go back to sleep. First, a quick look at the markets.
Pistols and Ropes: Yesterday, the stock market fell. By the close of the day, the Dow was down more than 300 points. What will happen tomorrow? We don’t know. Last week, analysts concluded that the “bear market was over.” According to some, stocks were “back in bull territory.” But real bear markets do not end with investors looking for opportunities to buy in. The bottom doesn’t come when people are waiting for it. It comes when investors are looking for loaded pistols and ropes.
Our guess is that the first slash of this bear market happened so fast, investors have not had time to feel the pain. They are still in bubble mode; they still think that the feds won’t let them down… especially not now, since they have just woken up.
Reuters: “A steep economic downturn and massive coronavirus rescue spending will nearly quadruple the fiscal 2020 U.S. budget deficit to a record $3.8 trillion, a staggering 18.7% of U.S. economic output, a Washington-based watchdog group said on Monday.
Releasing new budget estimates based on spending mandated by law, the Committee for a Responsible Federal Budget (CRFB) also projected that the fiscal 2021 deficit would reach $2.1 trillion in 2021, and average $1.3 trillion through 2025 as the economy recovers from damage caused by coronavirus-related shutdowns.”
And here’s the Committee for a Responsible Federal Budget itself: “We project debt held by the public will exceed the size of the economy by the end of Fiscal Year 2020 and eclipse the prior record set after World War II by 2023.”
Rendezvous With Destiny: The government is providing more fake money “stimulus” than ever before. It’s bailing out hedge funds and mom-and-pop groceries. Billions for big business. Beaucoup for little businesses, too. All this moolah must go somewhere. But not necessarily where… and how… investors expect. Now that the focus of stimulus has moved to the fiscal channel (federal deficits rather than just lower interest rates) consumer prices are likely to increase, too. So nominal stock price increases could be another trap… disguising a real fall-off in value. That is what happened in the 1970s.
We could soon reach Dow 50,000, in other words. But we could soon reach a $25 cup of coffee, too. That’s why we keep an eye on the Dow-to-Gold ratio. It shows us how much the Dow is worth as priced in real money – gold. The ratio hit a peak over 40 in 1999. Since then, it has come down. It’s now at 14. But it still has a long way to go before it reaches its historic “rendezvous with destiny” below 5. That’s where the real bottom will come. Meanwhile…
Fatal Flaw: When we left you yesterday, the protagonist – the U.S. government – had just begun to reveal its fatal flaw. “Hamartia” is what the Greeks called it. It’s what turns a hero’s good intentions into tragic results. You’ll recall that the American Empire – indeed, the whole world – has been struck by plague.
The feds stepped up to the challenge. But their instincts are always corrupted by self-interest… and self-delusion. They think they know more than they really do. And they can’t help themselves; they want to boss and bully… and increase their own power. So they weren’t going to let a perfectly good crisis go to waste.
Instead of facing up to COVID-19 with grace and courage, burying the dead, and embracing the living…instead of backing off and letting normal civilized society return to its work…the feds made it worse in two ways…
War Path: First, they may have made the plague worse by going to “war” with it. A better idea might have been to urge people over 60 – and others who might plausibly die from it – to lay low, while letting the rest of the population go on with their lives. “Flattening the curve” may help the health authorities cope… but it slows the rate at which the herd acquires immunity. Not to mention flattening the livelihoods of millions of people.
Without immunity (enough people who don’t pass along the disease) the virus remains a threat to old people. A visit from a grandchild could be fatal. In short, over the long run, the virus may kill more people, not fewer, thanks to the government’s lockdown efforts. But we put that forward only as a hypothesis… We don’t claim to know for sure.
As to the second way in which the feds made the situation worse, we are absolutely sure. They preyed upon the public’s fears…took control of the economy and put it on a war footing…suspended the normal give-and-take of a civilized society – wherein people have to earn money, not just get it from the feds…and they’re paying for it all with printing-press money. There is no way this is going to end well. About which… more to come…”
- rogueeconomics.com