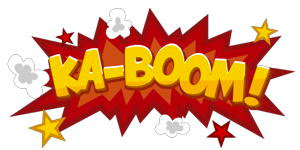 “Four Steps to Ka-Boom!”
by Bill Bonner
SALTA, ARGENTINA – “We drove up to the capital city to take care of business. Argentina has the toughest lockdown in the world. Regular airline travel to Europe or America, for example, is not expected to resume until September. But there are no cases of the virus in Salta. So it has been allowed to return to normal… almost. It is not a pretty city. The sidewalks are broken and disorderly; we stumble down the streets as if we have a drinking problem. 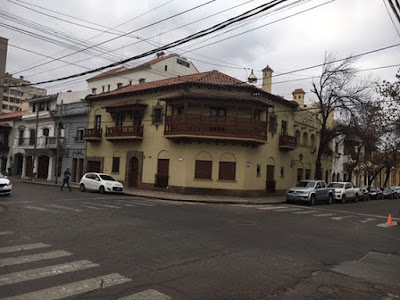 A traditional Salta house.
Shops are open. Restaurants, too. But there are few shoppers and fewer diners. Last night, at a neighborhood eatery, we were the only customers. As for the tourist shops – selling mostly gaucho regalia – they are almost empty. And even though there is no evidence of active infection in the city, we are required to wear a face mask whenever we go out in public.
Alarming: Salta has nearly twice the population of our hometown, Baltimore. And people here are much poorer – with an average wage that is probably only about $15 a day. Still, we see no beggars, no panhandlers, no layabouts or derelicts. In Baltimore, they are as common as rats. Baltimore also has about one killing per day, for a homicide rate (per 100,000) of 56. In Salta, the homicide rate is just 7 per 100,000, which the newspapers here say is “alarming.”
But in both Argentina and America, the feds are destroying their economies… even faster here than in the U.S., probably because the gauchos have had more practice at it. Here, employers are required to continue paying their employees during the lockdown, even though they may not be working. This has not been a burden in the agricultural sector – where cows still need to be fed and fields planted. But in many other industries – notably tourism, travel, and hospitality – it is devastating.
Already, three of the five airlines servicing Salta have announced that they are either giving up the route, or going out of business entirely. LATAM Airlines, which we normally take from Panama to Salta, has done both.
Intentional Damage: “It may be intentional,” says a friend, speaking of the damage caused to the Argentine economy by the severe lockdown. “The idea may be to completely wipe out the economy, and blame it on COVID-19. And then, the feds here will nationalize some industries and be able to show improvement as the economy opens up again.”
That may be true. But it is more likely that they just don’t know any better. Politicians and government health experts have no idea how an economy works. They think it is just a vehicle to take the deciders where they want to go. This mechanical metaphor leads the simpletons to believe that an economy is something that can be turned on and turned off… sped up… or slowed down. They think they can steer it, or “fine tune” it… and “fix” it when it breaks down.
But a real economy is not mechanical at all. It is more like a living thing… made up of billions of other living things, each with its own ideas, skills, and ambitions. The parts are separate, but they work together like the parts of the body. The liver cannot exist without the heart. But neither wants the thyroid to tell it what to do.
Trying to fiddle with… or improve… such a complex organism is futile and conceited. We can only improve our little piece of it – say, by repairing the sidewalk in front of our house… or smiling at a grumpy neighbor. We can never improve the whole thing.
Corrupt and Unstable: And yet, here come the quacks with their opium and arsenic. They are poisoning the whole of civilization – the economy, the government, and the society, too. In order for people to live together peacefully, they need to share a common understanding – a “social contract” – that the majority at the center believe is fair.
But today’s center wobbles. Because America’s “two-tiered” fake-money system is corrupt and unstable. It rewards some and punishes others. It pushes up prices in the financial economy. But it slows down the real Main Street economy under the burden of more than $78 trillion in debt, fake money giveaways (including $1.4 billion in COVID-19 checks that the Government Accountability Office says were sent to dead people… marked, conveniently, as “DECD”… in case the shades had any doubt about it), and false financial signals.
The Argentines lived through a similar period in the 1970s and 1980s… when inflation went to 20,000%. Violence increased and the military seized control. Then, it got worse, as the generals “disappeared” anyone who dared to protest.
Long Way to Go: But in America, we have a long way to go…
First, the Federal Reserve needs to step up its money-printing. This is almost guaranteed. Because if they back off now, the stock market will fall again.
Second, the feds need to “stimulate” the Main Street economy, too. They’ve already made a big effort – including the above-mentioned $1,200 checks and a $4 trillion deficit. But they are just getting started. There will be no V-shaped, rocket-ship recovery. This will cause the feds to spend more.
Third, the dollar must fall. Eventually, this, too, is almost a sure thing. But it can take time.
Fourth, consumer prices need to rise. This will happen slowly, at first. Then, Americans will see prices rising and realize that their dollars are not as valuable as they thought they were. Suddenly, dollars will begin to change hands more quickly. The “velocity of money” will shoot up, as people will no longer be willing to hold dollars in their bank accounts. Then, prices will rise much more rapidly.
Ka-Boom! Meanwhile, the masses must get restless… sensing that something is very wrong, but not knowing what it is. Rabble rousers on one side will point at “greedy capitalists,” “racists,” and “fascists.” On the other, they will want to call in the troops to restore “law and order”… even if it means giving up on the Bill of Rights.
At that point, the center no longer exists. Morons on the Left. Imbeciles on the Right. And nothing left in the middle. The feds will print more and more money… just to try to keep the lid on. But it will go Ka-Boom! anyway. Don’t forget to duck. BS, accusations, plots, and conspiracies – shrapnel will fly in every direction… And then, the results are completely unpredictable.”
Have a nice weekend…”
- www.rogueeconomics.com