“The Only Thing You Need to Get Good At”
by David Cain
“A tiny article about Stoicism has had a significant influence on my life since I read it. Maybe for the first time in my adult life, I don’t feel like I’m wasting much of my time. I feel unusually prepared to do difficult things. It was a short personal essay by Elif Batuman, about how reading Epictetus helped her through a strained relationship, political turmoil in her country of residence, and other messy or insoluble worldly concerns. It also prompted me to start reading what are sometimes called the “big three” Stoic works, “The Discourses” and “The Enchiridion” by Epictetus, and “The Meditations” by Marcus Aurelius, who in his spare time was the Emperor of Rome. (Free downloads at bottom of article.)
I knew the basic idea of Stoicism, and it made sense: don’t freak out about what you can’t control. It’s perfectly logical. But logical isn’t always practical, at least for a species whose members typically can’t even fulfill their own new year’s resolutions. Humans have never been short on sensible-sounding advice: spend less than you earn, don’t put off till tomorrow what you can do today, be patient, don’t drink coffee after 6pm. What we’re short of is whatever quality it takes to get ourselves to do those things. But I wasn’t giving the Stoics enough credit. So far, their advice is very practical- more self-improvement suggestions than philosophical ideas.
Basically, Epictetus tells you to continually divide your moment-to-moment concerns into two bins: the things you can control, and the things you can’t. Whenever you feel any sort of anger, desire or aversion, you look at the situation in terms of those two bins. You quickly notice that the first bin is much, much smaller, and fortunately, it’s the one you’re responsible for. Essentially, it amounts to your actions and choices. The second bin is enormous, and it is the responsibility of the gods.
You can feel free to leave the gods’ enormous bin entirely up to them, as long as you do your best to tend to your small bin of personal choices and habits. Of course, the larger bin still affects your life, even though you can’t (and shouldn’t try to) curate it. It contains matters such as when and how you die, how others act, the weather, and the stock market.
Obviously we have a stake in how those matters turn out, yet these outcomes aren’t really up to us, and we shouldn’t make ourselves miserable wishing they were. You will be treated unfairly, you will get sick, you will lose everything, and you will die, and the gods (or whatever forces there are) will deliver those fates to you as they please. 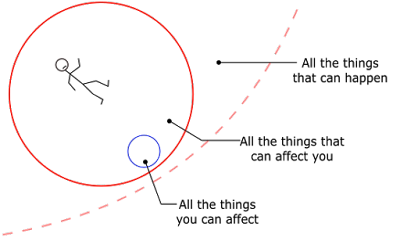 Stoicism gives you a very useful refrain towards these the matters that are out of your hands: That is none of my concern. Even in my initial experiments with it, it’s already become pretty easy to dismiss the largest categories of creeping worries, ones along the lines of:
What if ____ happens?
Why can’t ____ just ____?
I just wish ____.
Please let ____ be ____.
None of my concern! I can let the gods sort this stuff out, and attend to whatever actually ends up in my bin.
Our normal impulse is to see misfortune, loss, death, and the choices of others as primary concerns, since they can significantly affect our lives. But this is where the Stoics deviate from our natural inclinations. They offer a bold new take: a thing doesn’t automatically become your concern just because it might affect you. The gods are doing things all day long that might affect you, but what they choose is their business. So any hoping or worrying you do about the to-do lists of the gods just makes you miserable and wastes your time. Epictetus would say it’s even kind of rude.
According to the Stoics, all day long you should be returning your attention to the relatively small realm you can control. Ultimately, your only concern is your own diligence in tending to your own bin, and that’s always up to you alone.
To the Stoic, life isn’t a juggling act between a thousand competing concerns. You have one concern, and that’s to tend your own garden, small or large as it is. It works the same for a slave (which is what Epictetus was when he was born) as it does for an Emperor (which is what Marcus Aurelius was when he died).
You might think we’re already pretty good at working on what we can control and leaving alone what we can’t. But this isn’t the way the untrained human mind works- we tend to ruminate over whatever we find emotionally compelling, from either sphere. If a politician does something we don’t like, we could burn unlimited energy getting enraged, even when we have no intention, or ability, to alter the proceedings. It’s possible to waste your whole life essentially shaking your fist at the clouds, completely preoccupied with where you are disempowered, overlooking every way in which you are empowered.
By reclaiming your energy, all day every day, from your sphere of concern (the range of things that appeal to your emotions) to your sphere of influence (the range of things you can affect) you are continually developing the essential Stoic skill of taking your lumps as they come, with minimal fuss and tantrum.
One way to think of it it is that the Stoic is making a practice out of shrinking the sphere of concern down to roughly the same size as the sphere of influence, where it finally becomes manageable. 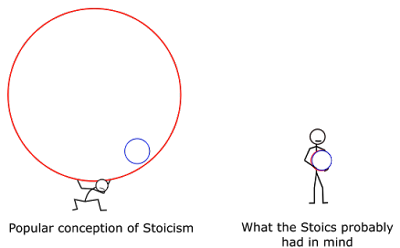 As hard as life is, the only refuge you need, or ever have, is your own will to do what you can within your own sphere. That’s all you need to attend to, all you need to think about, all you need to get good at. You carry this refuge with you wherever you go, and nobody can take it away.
The practice of Stoicism is new to me, but its central insight isn’t. Buddhism has an almost identical interpretation of the human condition: our lives are vastly harder than they need to be, but only because we grasp at more control than is actually available to us. I’ve been sold on this idea for years now- that happiness doesn’t come from finally learning how to control everything, but from finally learning how not to.
A passage from the Batuman article sums up this sense of carrying your empowerment with you, wherever you go: “When I read that nobody should ever feel ashamed to be alone or to be in a crowd, I realized that I often felt ashamed of both of those things. Epictetus’ advice: when alone, “call it peace and liberty, and consider yourself the gods’ equal”; in a crowd, think of yourself as a guest at an enormous party, and celebrate the best you can.”
- http://www.raptitude.com
◆
Freely download these works:
• Epictetus,”The Discourses”
• Epictetus,”The Enchiridion”
• Marcus Aurelius, “The Meditations”

Source: http://coyoteprime-runningcauseicantfly.blogspot.com/2020/06/the-only-thing-you-need-to-get-good-at.html
Before It’s News® is a community of individuals who report on what’s going on around them, from all around the world.