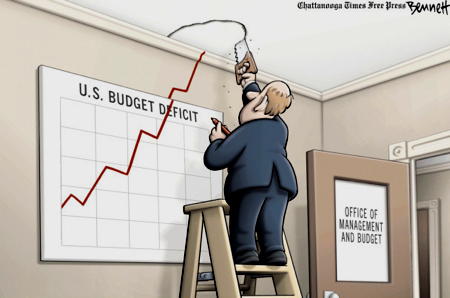 “Off the Charts; Off Their Rockers”
By Bill Bonner
SAN MARTIN, ARGENTINA – “These two headlines from Bloomberg caught our eye yesterday:
“U.S. Economy Shrinks at Record 32.9% Pace in Second Quarter”
“U.S. Jobless Claims Rise a Second Week in Sign of Growing Risks”
These are the reports we’ve been expecting. They tell us what we already knew: When you shut down an economy, well… you have less of an economy. About a third less, in this case. And since an economy is what provides our wants and needs… turn it off, and you have less of both of them.
Off the Charts: The decline in GDP didn’t merely break a record, it broke a whole vintage record shop, smashing the 1958 decline by three times and the 1932 Great Depression catastrophe by two times. Mathematicians say that such a collapse in GDP is a “10-sigma” event. That is to say, it is “off the charts.” By comparison, even the weirdness in the currency markets that brought down the 16 math geniuses at Long-Term Capital Management in 1998 was said to be only a “6-sigma” event. That’s the kind of thing that happens just once or twice in the life of the universe. Which goes to show what mathematicians know about markets and economics.
People don’t do exceedingly stupid things every day. Like playing Russian roulette, once or twice is usually enough. And if the feds shut down the economy – even once – that should probably be enough to convince them never to do it again. That’s why there are 10 sigmas… and not just two or three. People go off their rockers from time to time; but not often.
Better Than Normal: And it’s why we feel so lucky. How many people get to see such rare imbecility? How many get to gawk… point their fingers… and laugh so hard they practically burst? And what is even more fascinating than the actual calamity unfolding before our very eyes is the reaction of the masses, the movers, the shakers, and the intelligentsia.
Curiously, the economic drop is so shocking that people regard it as though it weren’t real. They think it is a “fluke”, caused by a virus, not something begotten by themselves. And they comfort themselves with mental legerdemain. By definition, 10-sigma events don’t come along very often. Ipso facto, they say, it will never happen again. It’s over. In the past. Like a bad night in Las Vegas; we’ll never mention it again.
That’s why – despite the worst economy on record – stocks are still priced as if everything were normal… even better than normal. And even with the biggest debt, and deficits, ever recorded in human history, both Democrats and Republicans aim to spend more.
The COVID-19 pandemic and the shutdown are certainly flukey. But the infection of the U.S. economy began long ago. From “patient zero” – the introduction of fake money in 1971 – to Greenspan’s “put” that protected investors from their own irrational exuberance… to the “deficits don’t matter” GOP… to the 2008-2009 bailout of Wall Street… to a $4 trillion deficit… and a $7 trillion Federal Reserve balance sheet – America’s finances were already suffering feverish day tremors and night sweats.
Its politics, too, had already degenerated long before COVID-19 ever appeared. In other words, the latest GDP report is an outlier. But it is part of a pattern, too, not an isolated event. There is little social distance between it and a whole group of sick phenomena. It is an interlocking mess – the decline of an empire… a desperate attempt to hold on to political and military power… paying for everything with fake money… rigging the economy and the markets to favor the rich… panicking in the face of the coronavirus… and turning the economy into a grotesque mockery of capitalism, depending not on capital, but – like a Banana Republic without the bananas – on phony money from the Fed.
Dramatic Event: And it’s not over. These trends lead to what analyst George Karahalios calls “a clusterf*ck of additional policies cheerfully designed to engender a better universe…”
Yes, Dear Reader, the second quarter is past. But the fever remains, with its something-for-nothing delusions… its fantasies of “printing press” money… and its “us against them” politics… And there is the U.S. economy… the Empire… the Constitution… capitalism… the peace and harmony of a once-prosperous nation – like an old man awaiting last rites… wasting away, his flesh fading and his chest rattling…
It may take centuries to build up a flourishing, civilized society. But it can go down fast. More to come…”
- www.rogueeconomics.com