If Republican voters don’t wake up to the following brutal incompetence of their own elected “leaders,” now, than we’re in truly deep shit.

It appears armed militia groups were allowed by law enforcement to help in Kenosha, which is now at the heart of this. More in videos below. But first…

Vos accused Evers of “turning to politics” by calling the special session instead of working through the Speaker’s task force.

Then after scoffing at that much needed special session, and a day later, Vos actually said this to his  heavy breathing base:

To be clear, calling a special session and bringing in National Guard troops caused the two deaths?
While Kenosha burns, the safely gerrymandered Republicans legislature, on vacation for the year, has decided to sit back taking pot shots at the Democratic Governor, doing nothing again, but lamenting the damage to property…not people:

Again, inaction by Republicans to help reform law enforcement, and letting this get out of control, is now being used as a weapon against Democrats like Gov. Evers. Their goal is to demonize the First Amendments right to protest and usher in a police state stopping future opposition. 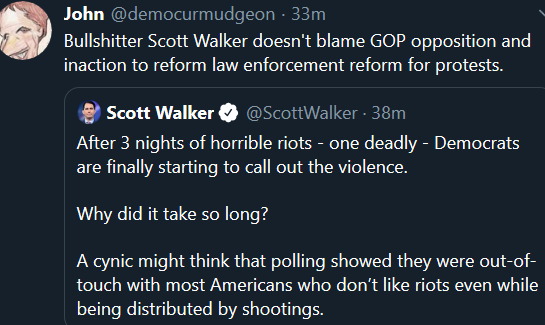 …and the inability of Republicans to lift a finger?
RIGHT-WING MILITIA GROUPS TO BLAME, NOT PROTESTERS:
It looks like local law enforcement made a tactical mistake costing 2 protesters their lives. It’s all documented. Here’s the original call to action on Facebook: 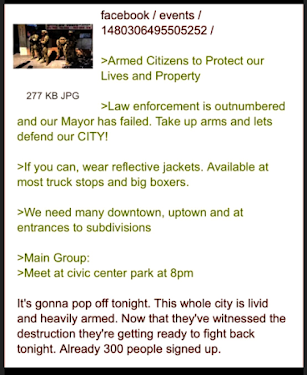 Enter the Militias: Hard to believe, but law enforcement planned to push protesters toward militia group and then leave. They also offered up water to militia members and thanked them for their help. All caught on video:

And yet the following statement seemed to try and put distance between the video clips above and what officials want you to believe.

Sheriff David Beth said on Tuesday someone called him to ask why he didn’t deputize armed citizens to patrol the city “and I’m like ‘Oh hell no.’  Deputized citizens would “fall under my guidance and my supervisors and they are a liability to me and the county and the state of Wisconsin. The incident that happened last night where two people lost their lives were part of this group that wanted me to deputize them. That would have been why I wouldn’t.”

Not so oddly, there is nothing from Fitzgerald, Vos, and Steineke about the deadly involvement of an outside militia or a call for a special session.
But the Milwaukee Bucks stepped up instead, forgoing a playoff game and shutting down the NBA:

The last-minute decision set off a chain reaction, and all NBA games were subsequently canceled in solidarity with the Bucks.

Sports announcers had to pivot to analyzing the significance of the Bucks’ players making a stand in the wake of the police shooting Sunday of Jacob Blake in Kenosha and the Tuesday night shooting by at least one vigilante of three protesters, leaving two of them dead. A 17-year-old from Illinois was arrested Wednesday in connection with the attacks.

“This is personal for the Milwaukee Bucks,” said ESPN’s NBA host Rachel Nichols, quickly put on-air in place of their NFL program. “Sterling Brown himself was a victim of police brutality just two years ago.” Nichols’ sentiment was echoed by analyst and former player Kendrick Perkins.

Here are protesters trying to help the shooting victim in the video above, but it was too late: