The 20th century Republican mindset that Medicaid is “welfare” is the cruelest form of denial, and a ridiculous simplification devoid of supporting details. Yes, I’ve blogged on this topic before using just Wisconsin’s Vos-Republican talking points. 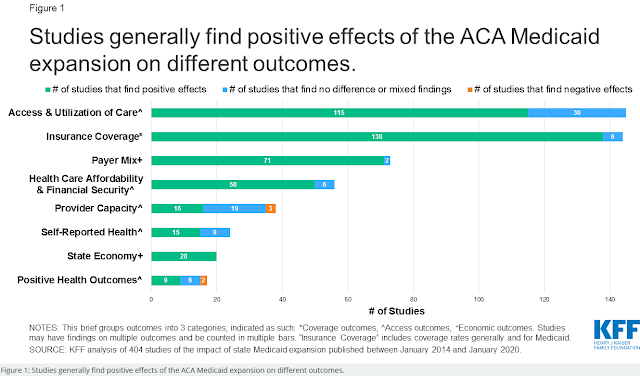 The Kaiser Family Foundation report shows how mindbogglingly bad Republicans govern our money and punish the people they don’t think worthy. The freeloaders, the jobless, business creation, the rural-urban divide, unmotivated unemployed, the opioid epidemic, poverty, etc. collapse under expanded Medicaid. It’s even kind of ridiculous. NOTE: Imagine if this were a national universal health plan, and not just Medicaid, and the increased benefits that would transform this nation:

2. Medicaid expansion reduced or eliminated disparities in coverage between adults living in rural vs. urban areas.
3. State-specific studies have documented significant job growth resulting from expansion. Louisiana found that in 2017, expansion funds created and supported 19,195 jobs (while creating and supporting personal earnings of $1.12 billion); in 2018, healthcare spending supported 14,263 jobs and $889.0 million in personal earnings. A study in Colorado found that the state supported 31,074 additional jobs due to Medicaid expansion as of  2015-2016.

4. Some studies found expansion was linked to increased employment.

7. Medicaid expansion has helped to reduce disparities in coverage by income, age, marital status, disability status, and, in some studies, race/ethnicity.
8. Effects of expansion on multiple state economic outcomes, including budget savings, revenue gains, and overall economic growth. There were no significant increases in spending from state funds as a result of Medicaid expansion. A study in Montana found positive financial effects for businesses due to infusion of federal dollars to fund health coverage for workers.

9. Expansion resulted in state savings by offsetting state costs in other areas, including state costs related to behavioral health services and crime and the criminal justice system.

13. No evidence of Medicaid expansion coverage substituting for private coverage including employer-sponsored insurance … may also reflect people above 100% FPL transitioning from subsidized Marketplace coverage to Medicaid after their state adopts the expansion.
14. Medicaid expansion improves access to care among the low-income population … decreased cigarette and other nicotine product purchases and access to evidence-based smoking cessation medications post-expansion leading to a 24% increase in new use of smoking cessation medication … expansion is associated with increases in overall spending on medications to treat opioid use disorder and opioid overdose.
15. Confusion among beneficiaries, providers, and advocates in expansion waiver states around requirements for participation, as well as barriers to internet access and transportation barriers. These challenges have resulted in increased costs to beneficiaries, beneficiaries being transitioned to more limited benefit packages, low program participation, or programs not operating as intended in other ways.
16. Improvements in health outcomes in cardiac surgery patients and acute appendicitis. Significant improvements in relative disparities for black infants compared with white infants, decline in annual mortality among near-elderly adults, that translates to about 19,200 deaths that were averted during the first four years of expansion. A 6% lower rate of opioid overdose deaths; may have contributed to infant mortality rate reductions (this effect was particularly pronounced among the African-American population).
17. Providers are meeting increased demands for care. Expansion results in significant reductions in out-of-pocket medical spending, and multiple studies found larger declines in trouble paying as well as worry about paying future medical bills.
18. A 2.2 percentage point decrease in very low food security among low-income childless adults. Two 2019 national studies found expansion was associated with a reduction in the rate of poverty by just under 1 percentage point (or an estimated 690,000 fewer Americans living in poverty).

19. Expansion significantly reduced the average number of collections, improved credit scores, reduced over limit credit card spending, reduced public records (such as evictions, bankruptcies, or wage garnishments), and reduced the probability of a new bankruptcy filing, among other improvements in measures of financial security. One 2019 study found that Medicaid expansion was associated with a 1.15 reduction in the rate of evictions per 1000 renter-occupied households and a 1.59 reduction in the rate of eviction filings