The Gift: Low Information Votes: What a party.
1. Republicans don’t have to do anything because they say the government should be smaller.
2. Their voters don’t “follow the news” so all they get are a few misleading headlines to read.
For over ten years, Republicans have done nothing to attract people to the state, except run ads in Illinois. Yea, that worked.
Raising wages would be a start, but that’s never going to happen…except if you’re in law enforcement. Weird huh, more money will attract people to become officers, but for everyone else, not so much. 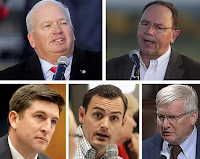 Pay Police More, with Money they Can’t Spend: No really, they’re doing this.

Keep in mind, all Wisconsin Republicans pictured here opposed the ARPA COVID relief money that they now want to spend. Worse, they’re trying to shift the blame to the Democrats, even though Republicans decreased shared revenues to local governments, who then had to cut local police forces statewide.

Ballsy Republican Rep. Will Penterman, trying to blame the Democrats, inadvertently admitted (in the yellow highlight below) that the downsizing of police departments started under Scott Walker:

Unfortunately, crime is on the rise in Wisconsin and the total number of law enforcement officers on our streets is at the lowest level in a decade. We are introducing a bill to reverse this trend of rising crime and police officers leaving the force.”

1. Republicans drafted these bills in secret.

2. Republicans are pitting law enforcement against the Governor and municipalities by promising officers and departments financial support using money that they have no control over. In what way is that a serious proposal?
3. Republicans are sitting on control of nearly $2 billion in general purpose funding, but instead (of raising shared revenue) are choosing to play political games.

“Republicans are proposing using one-time COVID funds to fund local law enforcement at roughly half the amount Governor Evers proposed since he was elected in 2018, and that Republicans voted against.”

Republican Authoritarian Control Coming Together: In conjunction with the Jan. 6the efforts to remake the country in their image, Republicans also want the power to use No-Knock search warrants, maybe to search local bloggers’ homes…:

The governor is unlikely to support one bill that would bar local elected officials, police chiefs and sheriffs, and fire and police commissioners, from banning no-knock search warrants either by ordinance or policy.

Illegal? Controlling Elections and Declaring the “real” Winners: Why the following isn’t getting the media attention it should is a mystery, but it’s now getting started here:

Among those filing documents that tried to give Wisconsin’s electoral votes to Trump was Bob Spindell, a longtime Republican activist who sits on the commission that is supposed to consider the complaint. As in Wisconsin, Republicans in six other states that Trump lost filed paperwork trying to lay claim to Electoral College votes that weren’t theirs. The paperwork they filed is nearly identical in many cases, according to copies of the paperwork posted online last year by the liberal group American Oversight.

Heck, a state Representative wanted to throw out our votes in Wisconsin. Will he get away with this?

Republican State Rep. Timothy Ramthun, who in November introduced a resolution to rescind Wisconsin’s Electoral Colleges votes, introduced a bill at the end of last year to dissolve the Wisconsin Elections Commission by June 30, 2023, and would transfer all the Commission’s duties to the Secretary of State…administering of elections and the certification of those elections. Putting a partisan official in charge of our elections would mark a radical and scary departure for Wisconsin and could further corrode confidence in our elections here. This move appears to be part of a national strategy by Republican operatives and Trump backers.

In February, the Wisconsin arm of the Service Employees International Union filed a complaint with the Elections Commission alleging the GOP filing amounted to fraud because the Republicans knew Trump had lost.

What’s even worse, these conspirators are actually openly telling us their plans:

On Nov 29, 2021, Washington Post: “Trump allies work to place supporters in key election posts across the country, spurring fears about future vote challenges. Steve Bannon declared: “We’re taking over all the elections. It’s about winning elections with the right people – MAGA people. We will have our people at every level.”