The Democrats and Gov. Evers have a big problem; we will never know what life in Wisconsin would be like under their policy vision. For now, Republicans are stopping not just what the Governor wants, but they’ve also blocked grassroots policy that usually starts at the local level with statewide bans. In other words, they can define and gaslight the public over a progressive agenda that no one gets to experience.

Republicans don’t Solve Social Problems, but they Create them by Passing Fantasy Anti-Government Theory: What are the festering social problems they’re trying to fix? There aren’t any. Here’s the Twitter list by AP reporter Scott Bauer, with my added my comments in parenthesis.

Among the Republican bills being voted on: 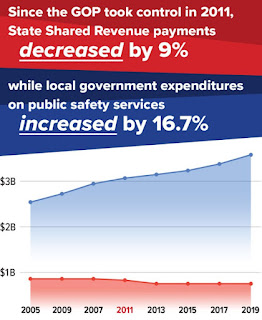 2. toughening penalties for protesters (rioters?), if they’re a clear danger or threatens to commit act of violence, including those who damage statues (anti-First Amendment)

5. call for a constitutional convention to amend U.S. Constitution

6. give Legislature power over spending federal money in an emergency instead of governor.

7. amend the constitution to say only citizens can vote. (stupid red meat)

8. ban the teaching of critical race theory (it’s not taught but opens the door for actual government censorship of history)

9. require employers to count a prior COVID-19 infection as an alternative to vaccination and testing. (testing counts?)

It’s Back: Scott Walker’s attack on the First Amendment right to free speech and assembly: One set of rules for Republicans…the amazing disconnect from Jan 6th insurrection:

Vos-Republicans were targeting Capitol protesters, but I immediately thought of the January 6th insurrection, remember? Republicans may claim it didn’t happen, but who are you going to believe, them or what your lying eyes are telling you? Clearly, God-fearing Christian nationalist patriots have a different set of rules and are not a danger carrying high-velocity weapons of war:

Create mandatory minimum sentences for people participating in riots — defined as gatherings of at least three people with a clear danger toward property or people where somebody commits or threatens to commit an act of violence. “Intentionally” attending a riot would constitute a misdemeanor and carry a 30-day jail sentence; knowingly participating in a riot resulting in injury or property damage would carry up to a 45-day jail sentence.

Scott Walker tried all of this before, and Republicans will keep trying until they get most of what they want. Here was the Scott Walker plan back in 2011:

Groups of four or more people must obtain permits for all activities and displays in state buildings and apply for those permits at least 72 hours in advance. The policy requires permits for 100 or more people outside the Capitol. The policy does provide some leeway for spontaneous gatherings triggered by unforeseen events.

Groups holding demonstrations could be charged for the costs of having extra police on hand for the event. Costs associated with a counterprotest could be charged to that second group. The costs would be $50 per hour per Capitol Police officer – costs for police officers from outside agencies would depend on the costs billed to the state. The police could require an advance payment as a requirement for getting a permit and also could require liability insurance or a bond.

Any damage or cleanup after a demonstration could be charged to organizers.

The Vos-Republican bill is so bad…

The bill was also opposed by the conservative group Americans for Prosperity, who shared a statement saying, “AFP fears this well-intended legislation would have a chilling effect on the lawful exercise of free expression and could be inappropriately applied by government officials in a partisan or otherwise biased manner.”