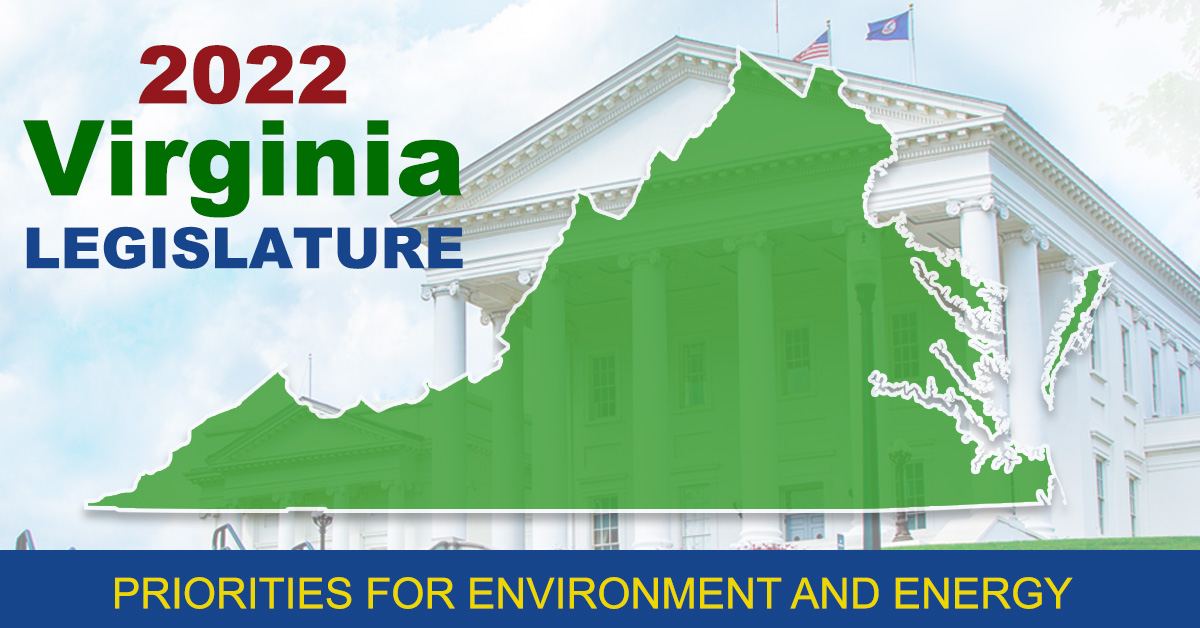 It’s that time of year again! Virginia’s 2022 General Assembly gaveled in on January 12 for two months of legislative wrangling in the crowded halls of the state capitol! Yeehaw –– it’s go time! Since we no longer have a progressive majority in the House of Delegates, we’re expecting to play defense on protecting pivotal laws from recent years that tackle the climate crisis in the commonwealth. Appalachian Voices is also hopeful that we’ll make progress on other measures aimed at reigning in the power of utility companies, protecting the environment and communities, and bringing renewable energy to the state.

Sounds exciting, right? Want to know how you can get involved? The absence of a social distancing policy and mask mandate at the capitol will have everyone dodging covid-19 like Mario jumping barrels in Donkey Kong

. Do not despair –– Virginia residents can stay safe at home but still participate in the legislative process by watching committee hearings online and testifying on legislation that is important to them by submitting written comments or speaking remotely. You’re going to have to bookmark those pages because it is crucial our lawmakers hear from you as they decide the course of the commonwealth’s response to climate change for years to come.

Not only will we have to watch out for covid outbreaks at the General Assembly, we’ll have to be vigilant to stop attempts to roll back progress in our transition to 100% clean energy. In 2020, the Virginia Clean Economy Act was signed into law and it put the state on course to phase out carbon-emitting energy sources by 2050. Governor Glenn Youngkin publicly criticized the Virginia Clean Economy Act during his campaign and we can expect legislators to try and poke holes in the legislation to weaken it. We can anticipate the same for 2020’s landmark Environmental Justice Act, which officially declared it the policy of the commonwealth to ensure environmental justice is achieved and maintained statewide. Finally, Virginia’s participation in the Regional Greenhouse Gas Initiative, an agreement to reduce carbon emissions while simultaneously investing in climate mitigation measures, is under attack as Youngkin has announced his intention to withdraw the commonwealth from the regional pact.

Be an Ardent Activist

Sign up to receive weekly legislative updates PLUS immediate grassroots actions you can take through March 12.

That seems like a lot of defense! Hold on tight because we’re also going to need you to chug some Gatorade so you have the energy for our offensive moves! To stop utilities from ripping off Virginia ratepayers, we’re demanding that electric utilities play fair. We’re supporting legislation to hold them accountable to the households they serve, be that by increasing regulatory oversight of Dominion Energy and Appalachian Power or by reforming electric cooperatives so that they’re more democratic and responsive to their member-owners.

As the clean energy transition continues, it’s also essential to make sure that no community is left behind — when power plants and mines close, it’s critical that people and places that powered our nation have good-paying, safe jobs and clean air and water. That’s why Del. Sally Hudson and Sen. Creigh Deeds have proposed budget amendments to establish a Coalfield Inter-agency Task Force at Department of Housing and Community Development to ensure a whole-of-government approach to supporting the region’s economic development.

Did you know that companies that plan to build pipelines or other projects that impact effluent water quality in Virginia don’t have to provide any initial baseline data before starting their massively destructive projects? That’s an outrage because we know that pipeline construction is wreaking major damage on our waterways. To stop that from happening, we’re backing two bills from Del. Rodney Willett: one that requires companies to provide the Department of Environmental Quality with key data on water quality before construction begins and another to require an analysis of equity and social and economic factors of impacted communities as part of the permitting process.

Along with that, the potential for increased metals mining is ramping up in the commonwealth WITHOUT ANY REGULATORY FRAMEWORK, so we’re supporting legislation from Del. Shelly Simonds to put the brakes on permits for large-scale metals mining for now so we can more closely examine outdated laws overseeing this industry in Virginia.

Ask your legislators to protect Virginia’s most vulnerable from utility disconnections!

Appalachian Voices is supporting bipartisan legislation to make solar energy more accessible in Southwest Virginia by expanding shared solar programs to the region. Additionally, we’re in favor of legislation from Dels. Lee Ware and Sally Hudson that bans campaign contributions from regulated electric utility companies. We also believe that no one should go without power and water during the pandemic, which is why we’re in favor of legislation from Dels. Kaye Kory and Irene Shin to protect people from life-or-death power and water shutoffs.

Throughout the legislative session, we’ll be posting updates and grassroots actions you can take at our Virginia General Assembly webpage. Add this page to your bookmarks and join us in playing offense and defense to protect Virginia’s people and environment!