Mount Shasta is a very powerful beacon to the indigenous peoples of northern California and southern Oregon. It is also the rumored home of Bigfoot, citizens of Lemuria, The Great White Brotherhood, and regular UFO sightings.

Towering Mount Shasta is the prominent centerpiece of northern California, rising like a glimmering diamond in a field of evergreens. Mount Shasta is situated at the intersection of three western mountain ranges: the Sierra Nevada to the southeast, the Cascades extending north to British Columbia, and the western Klamath Range. At 14,162 feet (4,249 m), Shasta is the second highest of the Cascade Range volcanoes and is home to California’s five largest glaciers. Mount Shasta rises more than 10,000 feet (3,300 m) from its base, soaring abruptly over a landscape of relatively level ground. Because it is physically unconnected to any nearby mountain Shasta is visible for a hundred miles in all directions on a clear day. This cone-shaped stratovolcano is relatively young, as is evident by the lack of extensive glacial erosion. Tiny sulfur vents just below the summit suggest this dormant volcano is merely taking a geological nap. Long regarded as a place of intense energy, the “Gentile Giant” Mount Shasta possesses a visible and majestic presence. New Age mystics believe it represents our planet’s version of the human being’s first or root chakra, located near the base of our spine. This theory then expounds that the mountain connects to our collective survival.

Also included in the extensive list of Shasta mysteries are unexplained mound clusters at different locations around the mountain. Some mounds near Goose Lake were created by Ducks Unlimited for birds to nest, but others defy rationalization. Archaeologists and geologists are in stark disagreement with one another, each claiming the other must explain the mounds. Large boulders are oddly found at the top of some mounds, rather than rolling down over time by the forces of gravity. Many of the mounds do not show signs of deterioration or erosion. What’s more, no Native American group claims responsibility, nor do any such groups have a history of creating mounds in this part of the world. At a twin cluster of mounds near the small town of Tennant there are mounds surrounded by interconnected moats. Although the moats are usually dry it is clear that water somehow interacts with the two clusters. Seen from above, the Tennant Water Mounds take on the appearance of crop circles because of their unusual geometric shapes. Nature certainly does not create anything this perfect. It is possible that an eccentric rancher with a penchant for sacred geometry created the mounds with a bulldozer as a watering hole for his livestock. By why go to so much trouble? Those who believe in the underground city of Telos offer another explanation. When the dew point reaches an optimum level, the moats around the mounds are filled by a channel connecting to an underground water source. When filled, the water molecules are excited to the point that they can self-regulate the mounds by clearing the moats of any debris. Once in operation the water mounds serve the purpose of creating lenticular cloud cover for entering or exiting spacecraft. It wouldn’t be the most far out Shasta theory. After all, unexplained sightings of ape-men, UFOs and hooded phantoms are reported every year. Such stories only enhance the mystery and legend of this powerful mountain.

Brad Olsen is author of nine books including two in his Esoteric Series: “Modern Esoteric” and “Future Esoteric.” An award-winning author, book publisher and event producer, his keynote presentations and interviews have enlightened audiences at Contact in the Desert, Human Origins, UFO MegaCon, DisclosureCon, and dozens of radio (including Coast to Coast, Ground Zero, and Fade to Black) and television shows (including Ancient Aliens, America Unearthed, Beyond Belief, and Mysteries of the Outdoors). Brad is a founder and co-producer of the How Weird Street Faire in the SOMA neighborhood of his home-base San Francisco. The Chicago native’s esoteric writing continues to reach a wide audience while he continues breaking ground in alternative journalism, public speaking, illustration and photography. 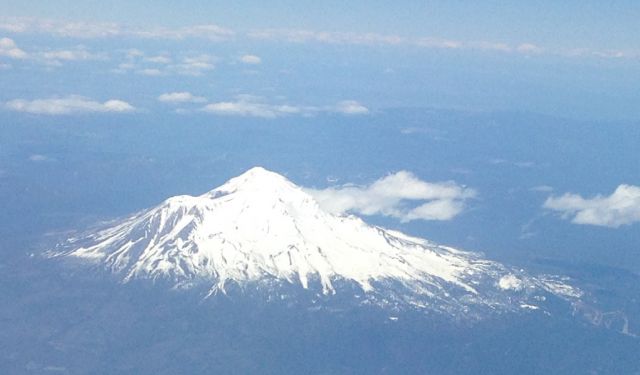