The Miracle of the Sun, also known as the Miracle of Fátima, is reported to have occurred on 13 October 1917, attended by a large crowd who had gathered in Fátima, Portugal.

The prophecy made by three shepherd children was that the Virgin Mary (referred to as Our Lady of Fátima), would appear and perform miracles on that date.

The official 1917 story reads: Newspapers published testimony from witnesses who said that they had seen extraordinary solar activity, such as the Sun appearing to “dance” or zig-zag in the sky, careen towards the Earth, or emit multicolored light and radiant colors. According to these reports, the event lasted approximately ten minutes.

According to many witnesses, after a period of rain, the dark clouds broke and the Sun appeared as an opaque, spinning disc in the sky. It was said to be significantly duller than normal, and to cast multicolored lights across the landscape, the people, and the surrounding clouds. The Sun was then reported to have careened towards the Earth before zig-zagging back to its normal position. 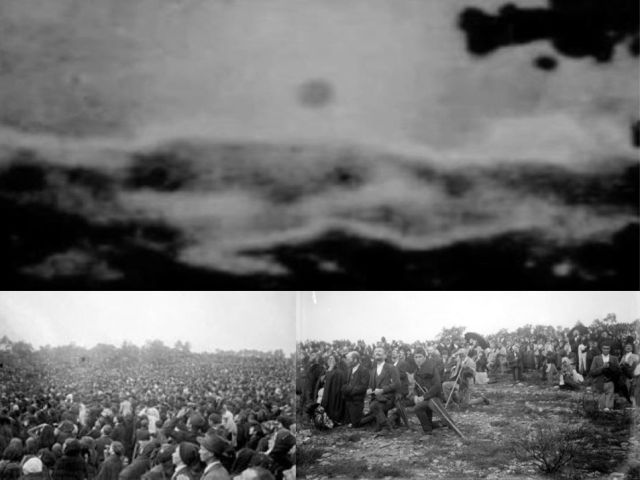 But according to Joaquim Fernandes Ph. D. who has studied the event on October 13, 1917, it was some kind of physical phenomenon.

There is a testimony from a lawyer, Dr. Almeida Garret, who was present at the miracle of the sun and Garret said that he looked up and saw a dull silver disc object.

And it was not only Almeida Garret who refers to a dull disc object, many witnesses describe a cloud just coming out of nowhere and out this cloud comes a craft.

Although the miracle of the sun is still surrounded by mystery, according to L.A. Marzulli, the witnesses of the 1917 event are actually seeing a cloud that forms in front of the sun on which then the UFO comes out, making some impossible maneuvers before it disappears.